After roughly one month away from WWE, Dean Ambrose finally came home this past Sunday night (Sept. 21, 2014) at the Night of Champions pay-per-view in Nashville. He was there to do the same thing he's been doing every day since that fateful night in June -- hunt down and destroy Seth Rollins.

He succeeded only in as much as he whet his appetite just enough to continue the pursuit.

But now he's got competition in the form of John Cena, himself up set with Rollins over the fact that Mr. Money in the Bank cost him his match with Brock Lesnar and, in turn, the WWE world heavyweight championship.

That's all in kayfabe land.

In reality, while Cena's time may not be up, Ambrose's time is definitely now.

It's been reported elsewhere but, really, it's obvious for anyone with fully functioning eyes to see: the number two babyface in WWE right now is this guy: 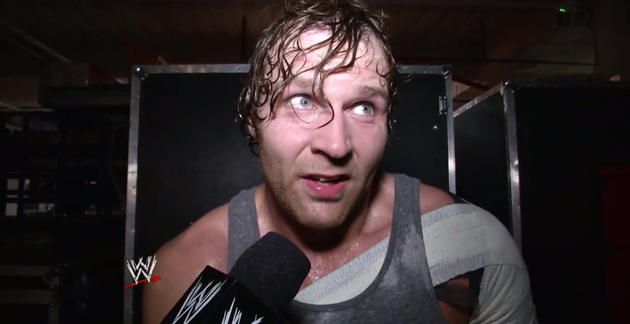 He will be pushed as such too. For all those who were dying in anticipation of his return, now that he's back he's going to get the ball and we'll see just how far he can run with it.

Sadly, his positioning isn't so much a choice but a lack of options. Roman Reigns had emergency surgery over the weekend and could miss the rest of the year. Daniel Bryan has been out for months and may not be back until early 2015. Batista is gone, reveling in the success of Guardians of the Galaxy and harboring a grudge at how he was used creatively before he left. CM Punk felt the same, among other things, and up and quit back in January with no return in sight.

Whether the timing is right or he's ready for it or not, Ambrose is now the number two babyface in WWE and you can expect more episodes of Monday Night Raw to go off the air with his music playing instead of that of the far bigger star in the ring standing next to him.

All you supporters of "The Lunatic Fringe" convinced he's the next big breakout star get ready -- you may be proven right -- or wrong -- over the next few months.