Dean Ambrose is not the titty master

Share All sharing options for: Dean Ambrose is not the titty master

Sorry, everyone, but Dean Ambrose is not the titty master.

First, the back story, or what's known of it. Ambrose was working a WWE house show and someone photographed him with his wrist tape showing the word "titty" written on it. From there, the Internet did its thing and a meme was born. Then, surprisingly enough, a sign calling Ambrose the "Titty Master" found its way on WWE television during one of The Shield's entrances on Monday Night Raw. 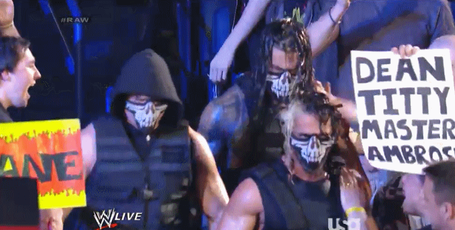 Well, the guys at Mike and Billy had the man himself on for an interview and before they let him get away, they made sure to get the scoop on the story.

His response when asked if he knows about it:

"No, I have no idea. That's why I don't do the Internet much. It's too much. I don't need to open myself up to that world."

There you have it, folks.

Then again, his saying as much isn't likely to make it go away.