Continuing a trend of one-named wrestlers and trying to capitalize on anxiety about a new cold war, Rusev is Alexander and Bulgarian no more.

Share All sharing options for: Rusev loses his first name, moves to Russia

It started at Extreme Rules, as his manager/"Social Ambassador" Lana used her promo time before his introduction to talk about the greatness of Russian President Vladimir Putin.  Now, WWE.com has revealed that her client, introduced to the WWE Universe at January's Royal Rumble, hails from Russia rather than Bulgaria, and will henceforth be known only by his surname. 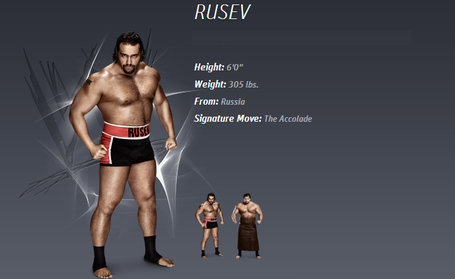 Part of this is obviously to capitalize on Russia's recent moves in Crimea and the Ukraine, which have lead to its reclaiming its role as a villain on the world stage in the eyes of the West.  Given that children and others in the WWE Universe are probably not well versed in geopolitical affairs (witness the thud with which Lana's references to NSA whistleblower Edward Snowden, currently living under asylum in Russia, landed last night on Raw), the change is likely to strengthen connections to Rocky IV heavies Ivan and Ludmilla Drago as much as it ties the pair to Putin's imperial urges.

The no-longer-Bulgarian brute also joins recent main roster additions to have a name removed from their character, after Cesaro lost "Antonio" and Big E dropped "Langston".  I honestly have no idea what that's about, since it doesn't seem to fit with the Reality Era (most athletes, entertainers and human beings are known by a first and last name), and having two names hasn't hurt their biggest stars like John Cena and Daniel Bryan.

It does suggest a disconnect between the creative team in Developmental and WWE Creative, as all of the name changes have occurred after the performers' call-ups from NXT.  In any event, probably not a huge deal, and now we can all save our breath and simply refer to these guys by the name we were most often going to refer to them by anyhow.

What do you think, Cagesiders?  Will "officially" hailing from Mother Russia and going simply by Rusev help his act get over with WWE crowds?