The numbers are in for the past few WWE pay-per-view shows and they tell a lot about Daniel Bryan, Randy Orton and John Cena's drawing power.

WWE released its Quarter Four 2013 pay-per-view (PPV) numbers today, and though the PPV business is about to be totally upended with the launch of the WWE Network, these last few buyrate figures paint a clear picture of what fans are actually willing to spend their money on.

If you remember, the SummerSlam PPV featured WWE Champion John Cena's final PPV performance before returning at October's Hell in a Cell event. That show featured Cena putting over Daniel Bryan cleaner than he ever put any one over before. Bryan was red hot and getting consistently strong crowd reactions the likes of which hadn't been heard since Rock circa 2001.

The show pulled in almost 300,000 buys, but that's a number down from 2012's 350,000. Vince very famously (and candidly) called it a "swing and a miss." That show ended (after the buys had been made, mind you) with Randy Orton cashing in on the newly-crowned champion and kicking off the "Authority/Best for Business" storyline that has dominated television ever since.

Orton vs. Bryan was the feud of the moment and it culminated in a match at September's Night of Champions. For comparison's sake, the NOC event in 2012 featured CM Punk (well into his modern-era record breaking run) taking on John Cena 1-on-1 for the title for the first time since SummerSlam 2011. That event drew 190,000 buys, which was up from the 2011 edition that drew 170,000.

The 2013 show featured no John Cena, had CM Punk taking on Paul Heyman and Curtis Axle and the main event of Randy Orton defending his title against Daniel Bryan.

If anything, the 2013 Night of Champions buyrate shows that John Cena moves the needle. That sounds like a "duh" statement, but there's been very few occasions where he has been away because of injury, so PPV's like this are a rare thing and worth considering.

The other thing the number says is that WWE needs to better manage its talent. CM Punk was in the midst of a feud with Paul Heyman that was already played out. Axel was already a joke and their match wasn't enticing enough to warrant any buys on its own.

Orton vs. Bryan may have been what saved this show from dipping below 160,000 buys.

The PPV itself was poorly received with many labeling it the worst of the year. Bryan, of course, won the title but had it stripped the next night on Raw. The fans were then asked to shell out another $60 just three weeks later (at the Battleground PPV) to watch Orton and Bryan once again compete for the now-vacant WWE Championship.

It was tiring, repetitive, contrived and not worth the money. The event pulled in only about 115,000 buys. It was among the lowest-bought PPV's in WWE history. Daniel Bryan of course got the blame, and not the bait-and-switch booking that was now in its second straight month and third straight PPV.

The other big match on the PPV featured CM Punk taking on Ryback. Two guys who had a fresh match one year ago now were wrestling again, this time with their face/heel roles reversed. There just wasn't a lot worth buying.

As with Night of Champions, Battleground was poorly received and this time it followed a poorly received event. At least NOC followed a strong SummerSlam show. This was the second stinker in a row. Bryan was a third wheel in the Authority's feud with Big Show and fans decided not to shell out the money to watch something they wanted to happen (Bryan win and move on to a hot program), not happen. In fact, nothing happened as the match ended in a no contest, leaving the Championship still vacant.

Too bad, because ONCE MORE the fans were asked, three weeks later, to shell out ANOTHER $60 to watch Bryan and Orton AGAIN go for the title. This time, at the Hell in a Cell PPV, Shawn Michaels would guest ref. His star power and the always reliable HIAC gimmick pulled in a solid 225,000 guys. That's up from the 2012 show that pulled in 199,000. The 2012 show also had no John Cena, but featured CM Punk vs. Ryback for the title.

For the 2013 show, fans rightly thought this was the Daniel Bryan payoff and ordered HIAC in droves. The show was the second highest B-PPV of the year (behind Extreme Rules' 231,000 buys).

What does that say?

Among other things, it says John Cena is a needle mover. His return came at this PPV and though he had no feud leading up to the show, his return has to be factored in. The fact is: Parents have kept WWE's PPV business going for years now.

But you have to give Daniel Bryan some credit. His match FELT like it should have been the payoff. Instead, he was screwed yet again...not only on TV but it seems behind the scenes, as he was blamed for the poor numbers of the previous shows.

Big Show vs the Authority drew a whopping 177,000. The lowest in Survivor Series history.

So who is the common denominator here?

This guy? (Photo via Wikimedia Commons) 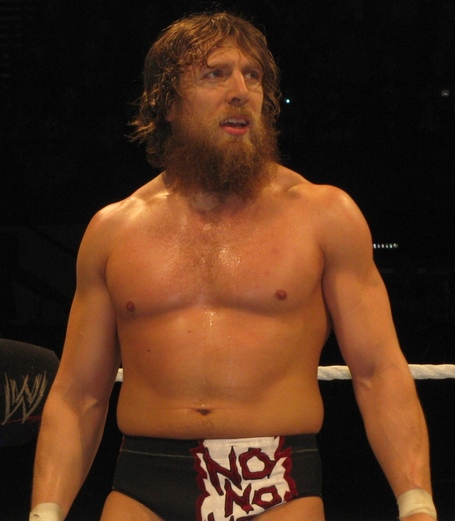 This guy? (Photo via WWE.com) 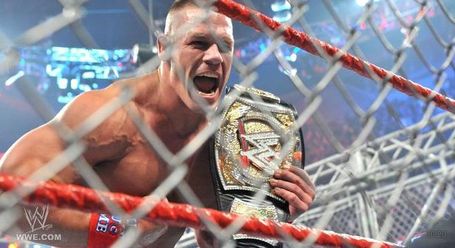 Cena was out during maybe the worst stretch of PPV buys in WWE history. Clearly he gets credit for the strong numbers they pull in.

Not Bryan. They blamed him and took him out of the way. Cena returned at the same time so at Survivor Series all should have been right with the world. Right?

Survivor Series' poor number falls on the shoulders of Randy Orton. Sure you can blame WWE creative, but Orton is the performer. Orton is the talent. Orton is the champ and the champ is supposed to draw. He didn't. He hasn't.

Has he been doing good work? No doubt. Maybe his best work since his magic stretch in the lead up to WrestleMania 25. But he's not drawing.

Did Bryan prove himself a draw? Perhaps not, but I think you can make an argument that fans were ready to buy a show featuring him win the title and after having the rug yanked out from under them one too many times, they decided it wasn't worth spending money on.

Kinda puts the "every PPV now free on the network" announcement in a whole new light, huh?

December's TLC event featured Orton and Cena in a ladder match unifying the WWE and world heavyweight titles. This is the unquestioned number one PPV draw they have vs. Randy Orton. It was a title vs title match.

Up from last year, though, right?

Sure. Last year had WWE Champion CM Punk out with an injury and Cena vs. Dolph Ziggler fighting over the MITB briefcase. The other big match on that card? Miz, Del Rio and the Brooklyn Freaking Brawler vs. 3MB.

I think the thing that caused Vince to pull the plug on Bryan so quickly was the SummerSlam buyrate. I think he expected it to do bigger numbers than what should have been reasonably expected. The number it did, 300,000 buys, is a great number for what is now the number three show (behind WrestleMania and Royal Rumble) the company runs.

Also, as much as it hurts to say it, the fact is Brock Lesnar vs. Triple H part one is a much bigger draw than CM Punk vs. Brock.

Not to mention the Cena vs. Bryan build up was not conducive to PPV buying. There was no story that made you want to shell out money. Those that did, did so because they wanted to see Bryan on the big stage and maybe win the belt. But in order to really move the needle you need to guys who hate each other and that you want to see beat the crap out of each other. You need a heel you want to see lose just as much as you want to see the babyface win.

Bryan vs. Cena didn't have that. It had an underdog story in Bryan without the guy wrestling him being the big bad champion monster. I think that hurt the buyrate a little. Certainly the constant bait-and-switch booking, plus the short turn around between PPV's hurt a lot. Kids aren't going to stream shows illegally. Adults are more likely. If you take Cena out, force kids to beg for 60 bucks every three weeks, and never give them a payoff, you can expect the numbers to suffer.

The lesson learned is one we all probably knew, but now confirmed with raw numbers. One guy can draw, one guy can't and one guy has yet to be given a real chance:

1) Cena has been at the top for almost a decade, and he is still a needle mover.

2) Bryan was never given a chance to draw in Cena's absence, and the best PPV chance they had (HIAC) did great numbers before the rug was yanked once again.