We're going to Recognize some Excellence in Contributions from you fine Cagesiders in a special comeback edition (probably for one time only) of the Cageside Seats REC awards: CM Punk walks out on WWE.

It's been a long time, folks, but CM Punk walking out on WWE and leaving Vince McMahon and company in the lurch -- right before the Royal Rumble fallout edition of Monday Night Raw, no less -- has created quite the stir here on Cageside Seats. It's created such a mix of emotions among you that I felt like it was time to bring back, for one night only, a special edition of the REC Awards.

Because we want to Recognize your Excellence in Contributions here on cSs.

Only two in this category but I wanted to call attention to them because they're both really good.

- The WWEekly Confidence Index: Where Do You Stand As a Consumer and Fan (Week of Jan. 26)

The Notorious Eddie Mac brought the heat with this post featuring links to all the relevant articles of the past week to help you make your decision on how confident you are in WWE going forward. It's a great idea and considering folks with the company read the site, your voice is being heard (in some way).

This one comes from tkatt00, who ran through the CM Punk situation in detail before presenting a sweet scenario to fantasy book a possible return. Is it likely? Of course not. Is it really fun to read and think about? Hell yeah! Go do just that.

Now on to the bread and butter of this community, the comments you lovely Cagesiders delivered while reacting to the various news that has come out at a break neck pace today, starting in the wee hours of the night and running right on through to this writing.

First, we've got *Asterisk* hoping Punk takes time to heal up and Kanenite suggesting a possible reason for Punk's departure:

They quickly followed that up with what the scene could look like now that Punk is gone and how awful it sounds:

Continuing a strong run, Kanenite wonders how this affects Punk's best friend. Rex Ivanovic comes in with a strong response:

Although his role in this may be greatly exaggerated, Batista is catching some heat for all this, as pointed out by Chris2814. Because to hell with Batista:

Cagesider atothezeem isn't sure if this is a work or not, but if it is it's great and if it's not, well shame on us:

A cold realization set in when considering WrestleMania and who has worked the main event in recent years. BIGPALE, TMadeBurner, and Wellington's Wellington riffed on it:

Cagesider chavez_26 gives props to Punk for leaving on his own terms and not letting WWE push him around but frapm and Yourroleandyou jump in to provide some perspective:

Allow me to put myself over piggybacking on who me and Vidence, not to mention make reference to one of the greatest matches of all time: 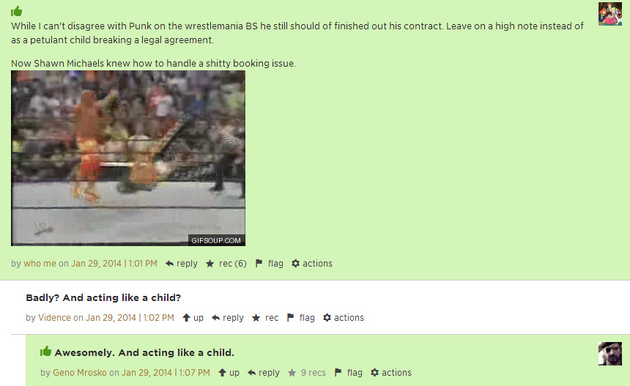 It's never too early for TNA jokes, and thanks to My Big Mouth, Flashking, Lone Stranger, Lamarley, and Kanenite (of course), we got just that:

Cagesider KDidz wonders if we're getting big traffic thanks to the Royal Rumble and this CM Punk situation. To answer that, yes, yes we are. Actually, we accomplished a goal I made when I took over the site in Aug. 2011 to be number one on the entire SB Nation network of blogs and that happened on Sunday. We're also number one today and, at last check, Punk walking out on WWE is the number one story across the network. The details on his departure post is number four. That lets you know how big this story is, what with Super Bowl 48 right around the corner.

But that's not why KDidz is getting a spot, and I promise I'm not trying to humble brag. I am proud, though, and do want to publicly thank the staff for all their hard work in getting us here. Anyway, KDidz made a great joke that I wanted to showcase:

We'll end this with Jonathan Loesche simply quoting Punk's pipe bomb from all the way back in 2011 that fits this situation perfectly:

As heartbreaking as it is to think Punk may be done with WWE, you Cagesiders made it easier to handle by being such a wonderful community.

Remember to stay up to date on all the latest and greatest on CM Punk leaving WWE with our StoryStream right here.

CM Punk gone from WWE; All the latest news and updates