Currently trending on Twitter and across the internet, Darren Young's landmark announcement during a TMZ interview is drawing a ton of reaction - starting with his employers and co-workers at WWE.

Share All sharing options for: WWE reacts to Darren Young coming out

WWE, as well as Darren Young's fellow wrestlers, are rapidly reacting to his announcing that he is gay in an impromptu interview with TMZ last night.

First, TMZ again broke news when they caught up with WWE champion and face of the company, John Cena, to get his response:

"Oh wonderful," Cena said ... "I know Darren personally. Darren's a great guy. That's a very bold move for him. And congratulations for him for actually finally doing it."

The champ also briefly mentioned his own personal story of his eldest brother's coming out, the difficulty of that and his family's acceptance of it. When asked about how this would affect things backstage at the world's largest pro wrestling promotion:

And just a short time ago, the company issued an official statement:

On TMZ this morning, WWE Superstar Darren Young revealed to the WWE Universe that he is gay. WWE is proud of Darren Young for being open about his sexuality, and we will continue to support him as a WWE Superstar. Today, in fact, Darren will be participating in one of our Be A STAR anti-bullying rallies in Los Angeles to teach children how to create positive environments for everyone regardless of age, race, religion or sexual orientation.

It's encouraging if not surprising that the immediate response has been so positive, although there will undoubtedly be some challenges ahead for Young and his employers. One has to wonder if there will be any heat on him for not coordinating his announcement with the company, or if the rapid response is any indication that his announcement was not as off-the-cuff as it seemed. Cena's comments about "actually finally doing it" would seem to indicate that Young's sexuality was an accepted truth for those in the locker room.

Regardless, this is a pretty great day for pro wrestling. Young is a trending topic on Twitter and search engines, and reactions are flooding in from all around the pro wrestling and entertainment world.

Enjoy Young's tag partner's reaction, and continue the discussion about this historic news on Cageside Seats. 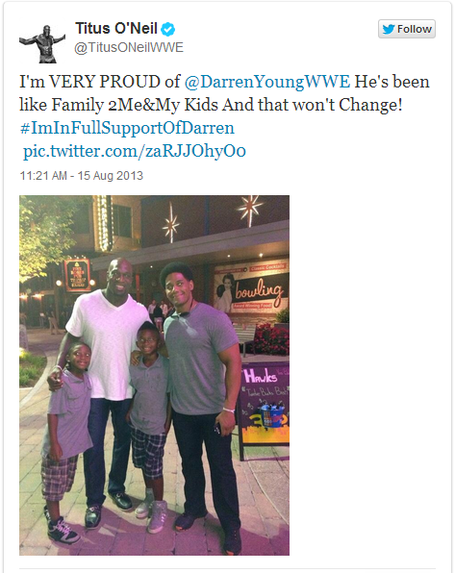