The first issue of WWE's latest foray into comic books, this time written by Mick Foley, hit last week. What did we think about it? Read on, True Believer.

A couple of weeks back, we took a look at the ten page preview for the latest big pro wrestling comic book mash-up, Mick Foley, Shane Riches and Alitha Martinez's WWE Superstars from Super Genius, an imprint of Papercutz. It took me a while, but I managed to get my eyes on a full digital copy of the first issue (from Comixology, but old-fashioned paper and staples copies are available at your local comics shops). So let's dig in, shall we?

Without going into the history of wrestling comics that has been covered elsewhere by more talented writers than I, the team behind WWE Superstars #1 has decided to take the road less traveled with this latest effort at merging two similar pop culture artforms. Not the insanity of the 90's Warrior comics or the kayfabe of Chaos Comics' Undertaker series, but more in the vein of last decade's WWE Heroes, where elements of the characters we get on WWE television are placed in a setting different than that of a pro wrestling show.

Only this one doesn't have to do with Triple H as an immortal god sent to save the WWE Universe. Which I think is how Hunter thinks of the average episode of Raw, too. But I digress. 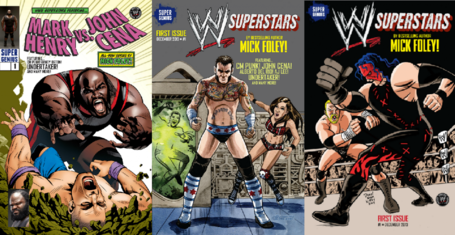 This book takes the only slightly less bat-$#!+ insane tack of taking the WWE roster and placing in-character versions of them in a hard-boiled detective setting. Titan City is controlled by the McMahon family, and son-in-law Hunter Hearst Helmsley is desperate to keep it that way. John Cena is a disgraced cop doing time for stealing public funds - half the city loves him, the other half hates him. Randy Orton wants to become District Attorney so nobody can tell him what to do. CM Punk is a street-level organizer who wants to return the city to the people. AJ Lee is a femme fatale playing all sides.

It works surprisingly well because the creative team is 100% committed to it. Similar to why I enjoy a television show like Sleepy Hollow, it doesn't spend much time justifying itself, but it doesn't apologize for what it is either. Foley has done a good job of taking the archetypes common to pro wrestling stories and transposing them onto their counterparts in noir fiction.

As you might have seen in the preview, this reaches a weirdness tipping point when these cops, criminals and laywers start doing wrestling moves in the middle of their day-to-day crime drama. Sometimes it's explained, like Cena getting jumped in the prison gym by thugs Hunico and Camacho along with Warden Zeb Colter and prison guards Antonio Cesaro and Jack Swagger, or Detective Dolph Ziggler Zig-Zagging Orton's bodyguard Ryback through a desk when he tries to take him out while he's sniffing around the lawyer's office. Other times...

it's just Randy and AJ discussing their nefarious plans while The Viper clotheslines some dude. I kind of like that they don't explain this. It goes to the "we know this is nuts, just go with it" vibe.

There are a couple of problems, but there's reason to believe that both can and probably will be corrected as the series and this initial four-part arc, entitled "Money in the Bank", roll on.

With so many roles to play, this first issue occasionally feels like an easter egg hunt rather than a story. Sure, part of the fun is seeing who Foley casts in what role. But by the time Mark Henry and The Bellas appear as part of the issue's dual cliffhangers, it feels like a little much. Hopefully, future issues (and arcs? I haven't heard any word on whether or not each story will be set in Titan City, or if after this we may get the roster in a medieval fantasy setting or something) will spend more time playing with the pieces these 20 pages focus on putting on the board.

The other issue is with the art. Like a three-hour Raw, some panels and pages look fantastic, while others look like they were done by a completely different artist, who was strapped for time. Hopefully, WWE Superstars isn't subject to the same last minute rewrites and on-the-fly booking as Raw, and Martinez will be able to ensure that all of the pages look as good as this one: 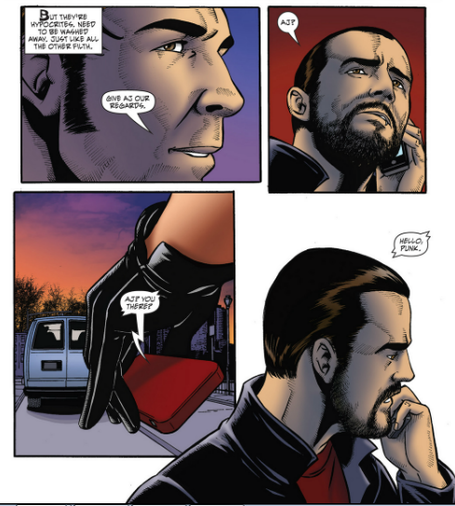 But I could see that quickly going up a little or down a lot. This will never be Watchmen or Sin City, but it could remain a lot of fun for the numerous fans of comics and wrestling that are out there.

Anybody else give it a read through yet? What'd you think?