Check out the poster for the WWE TLC 2012 event scheduled for Dec. 16 at the Barclays Center in Brooklyn, New York, featuring THE RYBACK.

THE RYBACK ATTACK IS BACK, JACK.

WWE will hit the Barclays Center in Brooklyn, New York, on Sun., Dec. 16, 2012, for its annual year end show, TLC, and InDemand has released the official poster for the event. 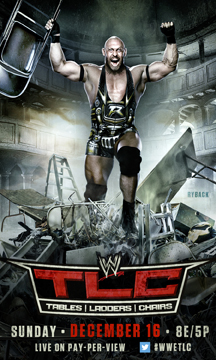 Currently, Ryback is still working the main event scene opposite WWE Champion CM Punk. The two are the chief members of opposing Survivor Series teams and this poster would lead one to believe he'll still be heavily involved in the main event come TLC.

Whether that's a good or bad thing is up to you.

The going gets to getting really good after that, though, with Royal Rumble, Elimination Chamber and WrestleMania 29 all right around the corner.