Following a disastrous-looking moonsault from the top of a steel cage, the younger Rhodes brother lets the world know about an injury via Twitter. But is it the body part we assumed? Plus, the latest on backstage heat and professional opinion about the spot.

Despite preparing for the spot late last year with a test run at Madison Square Garden, an attempted moonsault from the top of the steel cage during Monday night Raw looked to go very wrong when Cody Rhodes attempted it against tag team champs the New Age Outlaws.

Yesterday, Cody tweeted a picture revealing an injury. He makes no mention of it the damage was a result of the awkward looking landing, but given that the last time we saw him he was not wearing a support for the injury makes it logical to assume that it came from that fall.

What's especially noteworthy is it's not the arm that so many believed he had injured when he bounced wide left of Road Dogg, but his knee. 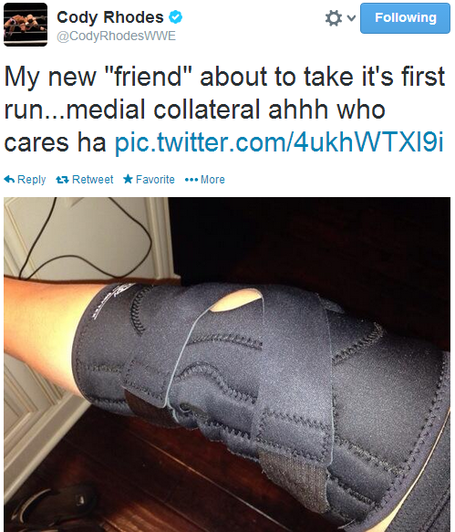 Speaking of the D-O-double G, most internet wrestling community (IWC) members, myself included, quickly placed the blame for the botch on the 44 year old who was never known as a workrate machine in his prime.

But word on the sheets is that there is not backstage heat on Jesse for the spot. And according to former WWE star and current wrestling Sensei Lance Storm, there shouldn't be:

I'll defer to a Hart Dungeon graduate and industry veteran like Storm. But, I don't know about you Cagesiders, I'd still rather have Antonio Cesaro trying to catch me.