The latest update on Sin Cara's finger injury is that he got heat backstage for it but he's also already back in action, having worked a dark match at the Main Event taping last night (Aug. 20) in Bakersfield.

As noted yesterday, Sin Cara suffered a dislocated finger during his match with Alberto Del Rio on Monday Night Raw in Anaheim, California, this week. It appeared to happen when Del Rio threw a kick, the very first move of the match, and was then exacerbated by a suicide dive to the outside.

At first, it appeared to be a work, considering the fact that cameras didn't shy away from the situation, showing the referee throwing up the "X" sign to signal for the ringside doctor, who proceeded to step in and stop the match, again in full view of the cameras. On top of that, Del Rio went about trying to work the match as though the idea was to get heat on himself for continually attacking his injured opponent.

Apparently, that was a little more real than folks in WWE would like to admit.

Then again, according to Dave Meltzer on Wrestling Observer Radio, there was a ton of heat on Sin Cara for the fact that he got injured so quickly and refused to continue the match.

"(Del Rio) was really mad. There was super, super heat. I cannot express how much heat there is on Sin Cara because of the feeling that (with) dislocated fingers you don't quit. ... Just so much heat backstage because of that being the injury and for the way he just quit on the match, which he did. That is what he did. But yeah, that's one thing that I did hear. That was about the biggest thing from the show, actually."

I find it difficult to blame a wrestler for stopping a match when he's injured. Sure, there's a such thing as working through the pain, but better safe than sorry, right? Considering the fact that Triple H once worked through a quadriceps tear, however, even allowing Chris Jericho to sit down in the Walls of Jericho on him after the injury, it's understandable why so few backstage would have sympathy for him.

The good news, if you can call it that, is Sin Cara returned to action just last night in a dark match before the Main Event taping in Bakersfield. He also posted the following photo (via Arda Ocal): 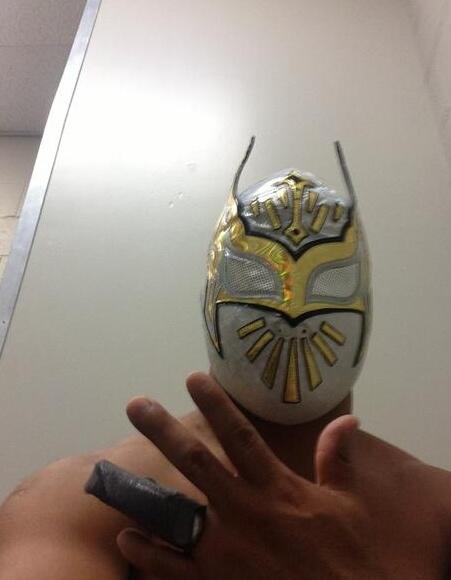