Now that the WWE "WrestleMania 29" event is in the books, it's time to take a look at the updated standings in the Cageside Seats Pay-Per-View Pick 'Em Game. Are you in the lead? Or at the bottom looking up?

WWE gave us its latest pay-per-view (PPV) event, WrestleMania 29 last night (Sun., Apr. 7) live from MetLife Stadium in East Rutherford, NJ. The show featured John Cena defeating The Rock clean in the center of the ring to become the WWE Champion; which, if you picked Cena, you earned TEN points. There was a total of 40 points to be had in this event. So, let's talk about the scoring, shall we?

NOTE: There were special bonus points available for this event, seeing as it's the biggest show of the year. The event is built on four big matches, so for those matches, we gave extra points:

The Dolph Ziggler Money in the Bank Cash-in was also back in play for this event. Predicting it correctly netted you an additional 5 points -- but predicting it incorrectly lost you 5 points as well, so you had to be careful with that one.

Each correct pick of every other match on the card was worth 2 points for this show.

This process continues with variations on the scoring for every WWE and TNA PPV event until the end of the season, which culminates just before SummerSlam 2013, when the points will be added and a winner crowned. Your prize will be The Big Gold Belt, so let's hope you made your picks count, folks.

Now, onto the WrestleMania 29 Break Down:

Tons of Funk & the Funkadactyls vs. Rhodes Scholars & the Bella Twins (Rescheduled for Raw)

That is a total of 40 points available for nine matches; best case scenario is to go 40-9-0 in the rankings -- although no one did it. Speaking of that, let's not waste any more time getting straight to the latest results from the picks for this event:

Who is the current leader of the pack? "bangarang18" all we can say to you is, yet again,

"You better prepare yourself, cause Chris Hines and J-Rodzilla are coming for you, BROTHA!"

Let's take a look at where everyone else stands and remember, we'll be back on Sunday, May 19, 2013, for WWE and its next PPV offering... Next up will be WWE Extreme Rules 2013, so be prepared to secure yourself some more points then!

Note: If you believe there are any discrepancies present in the charts below, please notify our staff. But for now, let's not waste any more time getting straight to the cumulative standings for this season -- 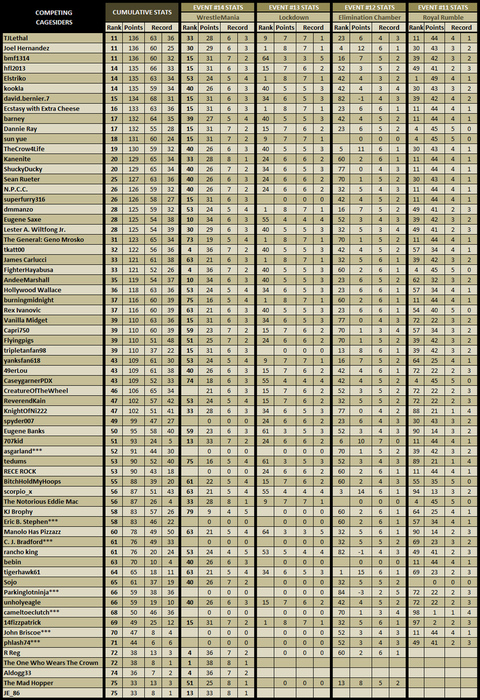 Those who are determined to never give up, 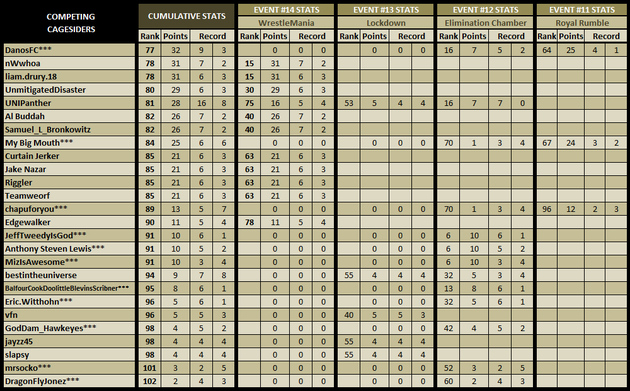 THOSE WHO HAVE BEEN ELIMINATED:

NOTE: If your name no longer appears on these charts, it is because you were eliminated from the game, due to lack of participation. Our rules state: Not picking in three consecutive events (since your last picks), is grounds for removal. Also, starting with event #9-TLC, missing a total of eight events (since you made your first picks of the season), will also result in elimination from the game.

ONCE YOU ARE ELIMINATED, YOU ARE NOT PERMITTED TO MAKE PICKS IN THE PPV PICK EM THREADS AGAIN

*Regarding Eliminations: Anyone noticing a series of asterisks (***) after their name above, has just become eligible for elimination after the NEXT event. So, if you do NOT make picks for WWE's Extreme Rules 2013 event, which airs on Sunday, May 19, 2013, you WILL be eliminated at that time, and no longer eligible to participate.

*** For a list of every eliminated participant so far this season, check here ***