Counting down the 10 best, most unforgettable moments in "WrestleMania" history. Up next is number two: Hulk Hogan's famous slam of Andre the Giant at WrestleMania 3.

Before we have a look at our number two entry, here are what I would call "the Bottom Five."

These are the famous moments in WrestleMania history that we just can't forget, try as we might. 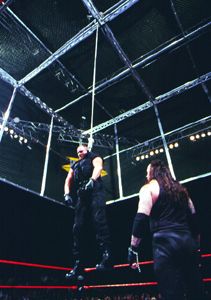 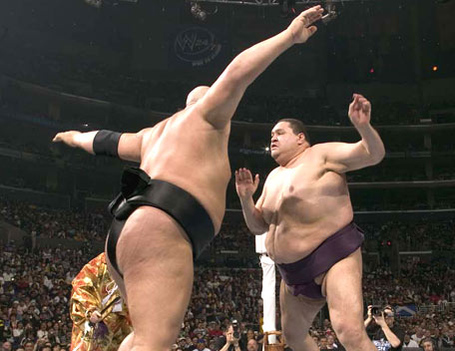 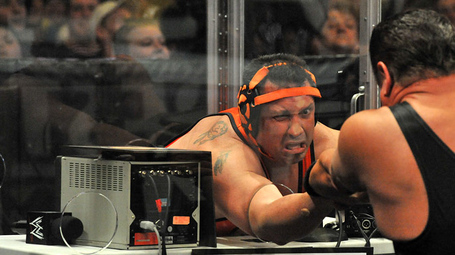 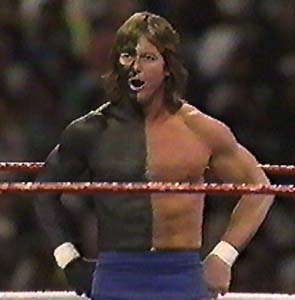 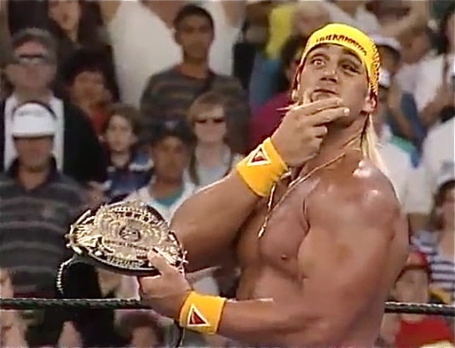 Yes, Hogan winning the title in 1993 is worse than racism.

On to "The Greatest Moments in WrestleMania History" #2:

Because shut up, Holland.

As big as it was, it didn't launch Hulkamania; that happened three years prior, in January of ‘84. The slam heard round the world merely provided an outlet to showcase the peak of Hulkamania.

And another thing: just one year prior, Hogan slammed King Kong Bundy in the main event of WrestleMania 2. Andre probably had maybe 80-pounds on Bundy, but Hogan had another years worth of juice vitamins in him, so that's a wash. Nobody freaks out about him slamming KBundy, probably because the Andre slam is, in itself, not the moment, it's everything coming together and climaxing in that moment (which is, granted, a part of WrestleMania's magic) with the 90,000 fans going bananas.

Still, it's a magical moment for a reason. Let's break it down.

It starts with Vince McMahon buying his father's company and crowning Hulk Hogan his babyface champion. Roddy Piper (the real MVP of the early Titan days) and others gave Hogan plenty of foils to overcome in the beginning of his reign. McMahon began expanding beyond the traditional North East borders his father's regional promotion had maintained, and with Hogan's seemingly unstoppable appeal, began to tour nationally (unprecedented at the time). Despite drawing crowds from coast to coast, the financial strain of a national tour nearly bankrupted the WWF.

With his company in do-or-die mode, Vince gambled on a pro wrestling super card (not unlike the NWA's Starrcade). The difference between WrestleMania and Starrcade would be in the promotion. It was billed, not as a pro wrestling show, but as a "Sports & Entertainment Spectacle." Teaming up with MTV (back when it mattered) and cross-promoting each others' stars helped bring the WWF the mainstream exposure it needed.

The bankroll of the company was gambled to bring in Muhammad Ali, Mr. T, Liberace, and others, and had the show not been a smash hit, the WWF would have folded. It was a hit, however, and WrestleMania gave the WWF the sure footing it needed to continue expanding. NBC began airing a weekly wrestling show, as Vince and company worked dramatic good vs. evil storylines and showcased cartoon giants every Saturday Night.

Saturday Night's Main Event, along with the traditional touring house show circuit helped set up the follow-up supershow, WrestleMania 2. While it was a success in terms of viewership, the three city format of the show ended up being a monetary loss (the only WrestleMania to lose money for Vince). As WrestleMania 3 approached, the financial state of the company and possibly its continued existence depended on the big show being a rousing success.

Vince's idea was to tell a timeless story, one that could appeal to fans and attract non-fans of the "sport." He had his captivating hero, but he needed a villain. Piper had been a perfect thorn in the side of the champ, but no one expected "Hot Rod" to step in a ring and out muscle the title from Hogan. Bundy, however, had successfully managed to convince children from 8-80 that the champ might have met his match. What Vince needed was to top Bundy. He found it in the only performer he had that could literally top him: Andre the Giant.

Already 40-years-old, having given half of that to pro wrestling, Andre had seen better days. He debuted with the WWWF in the mid 70's and remained one of the most beloved pro wrestlers of the era. According to legend, it took some convincing to get Andre to agree to turn heel, and both Hogan and McMahon wondered if the gentle giant might actually go into business for himself mid-match (more on that later). He finally agreed to flip when Vince explained how much money could be made if he made the change to villain (or how much he could lose if he didn't).

The set up came when Andre appeared on TV to congratulate Hogan for being awarded a trophy commemorating three years as champion. Soon after, Andre himself would be awarded a trophy (albeit hilariously tinier) commemorating 15 years as an unbeaten competitor. Though his unbeaten record was kayfabe, the fact is Andre had suffered only a few losses in his professional career.

Hogan came out to congratulate him, as Andre had for Hogan, but the cameras and interviews quickly turned from the giant to the charismatic champ. Frustrated at Hogan stealing the spotlight (get in line big man), Andre walked out, leaving the clueless Californian oblivious to his douchebaggery.

Andre confronted Hogan in an infamous segment on Piper's Pit, the evil manager Bobby Heenan at his side, and challenged Hogan to a match at "tha Wrestlemenya." Hogan tried to calm him down, but Andre grabbed Hogan's shirt and ripped it (planned) catching either his nail or Hogan's necklace in the process and slicing Hogan's chest (unplanned). The sight of blood on the champion at the hands of this angry giant had to have caused many a child to wet their pants. How would Hogan ever get the giant off his feet, much less pin him and retain the title?

The breathtaking sight of the Silverdome filled to beyond capacity is still one of the great images in all of pro wrestling. In fact, that shot -- with the bright roof overhead, and the sea of people surrounding the tiny blue-bannered ring -- is itself one of WrestleMania's best moments (probably top 20). It serves as a visual of the peak of the 80's pro wrestling boom. When finally it came time for the match, the crowd -- having already seen the best WrestleMania show to date -- was at a fever pitch.

Andre's approach to the ring is another great WrestleMania moment, as he was pelted with trash from the fans, soaking it in with an evil grin on his face. Usually celebrities doing ring introductions takes away from the splendor of the show (who can say a name better than the Fink?), but in this case, it works. Bob Uecker's call of "Andre ... the GIANT" is famous for anyone who watched WWE shows from 2007-2012, as it was one of the soundbites in the WWE programming signature.

Jesse Ventura and Gorilla Monsoon had the call here, and they remain the gold standard "team" for WrestleMania broadcasts. Everyone knows Gorilla's "irresistible force meeting the immovable object" line, but I love Ventura just bewildered, saying "Look at the size of the Giant. I mean, Hogan is 6 foot 8!" Oh Jesse, never change. Andre's wry smirk as Hogan was jarring at him always intrigued me. Andre was famous for ribbing the boys and even for being stubborn and doing things his way. I wonder if Hogan saw that smirk and wondered if Andre might decide to just change the script.

The opening minute of the match is almost as memorable as the ending. Hogan unleashes a flurry of punches, dazing the Giant, and then the "Hulkster" goes for a slam. He gets Andre waist high and then falls over. Certainly this was planned; it set up the story of the match: the only way he's winning is by slamming the Giant, and he's now 0-1.

But when Andre fell on Hogan and the ref started counting to 3, Andre didn't lift his body up. Or maybe he did, but the sheer girth of Andre's giant gut remained pressed on Hogan's chest. Hogan barely (barely) wormed his way out from under him. This is classic storytelling. The champ is vulnerable and the odds are clearly against him. This isn't Piper and Orndorff here.

Hogan is more than capable of putting on a great match, but this was never supposed to be a great match. Andre's physical limitations, and the need to sell the Giant's power, made this a heavyweight slugfest. Andre took over after the early two count, slamming Hogan and tossing him around like a ragdoll. This is a sight these fans have never seen before. Andre works Hogan over in the corner, body slamming and head butting while "The Brain" cheers him on.

Hogan makes a comeback, giving him everything he's got, but Andre never hits the turf. Andre locks in a bear hug (rest spot), and Hogan starts hulking up, breaking the hold. The champ runs the ropes and gives Andre a big body splash, but still the giant stays up; Hogan bounces off him like a rubber ball. Really, this is some great selling, and I wonder if Hogan has gone unappreciated for how well he put Andre over here.

The action spills to the outside and Hogan eats an ugly body drop on the concrete. Back in the ring it looks like the "Hulkster's" on his last leg. Hogan runs the ropes for the third time in the match. The previous two times have ended with either him eating Andre's boot or bouncing off Andre's giant chest. Andre goes for the boot but Hogan side-steps, bounces off the ropes hits Andre with a full head of steam and finally the Giant goes down. The crowd explodes, Heenan looks scared, and Hogan starts to feel it. Classic storytelling.

Andre staggers back to his feet, and oh the tables have turned. Hogan is jacked, the announcers are jacked, the crowd is jacked, I'm jacked watching the replay, and then the moment: Hogan looks to the crowd while nodding his head, as if to let us know he's going for it, walks over, picks him up, turns him over, and SLAM. One leg drop later and it's 1-2-3, cue up Real American.

The slam happened at just the right time, right at the peak of the crowd's frenzy. It wasn't a technical masterpiece, but it was perfectly paced so that the climax in the ring hit right as the audience was at their most excited. The announcers put it over like Hogan just did the impossible, and because of the opening minute of the match, it's not a hard sell.

It really is the signature moment in pro wrestling history, falling to number two only because of the years of the sheer emotion behind number one. But this, as its own little three second thing, is to pro wrestling what Babe Ruth calling his shot is to baseball.

Let us know what you think in the comments below.

See you tomorrow, as we reveal the number one best moment in the history of WrestleMania; a moment so poignant, it moves a stadium of jocks and marks to tears.