Counting down the 10 best, most unforgettable moments in "WrestleMania" history. Up next is number four: Shawn Michaels superkicking Ric Flair into retirement at WrestleMania 24.

On to number four: 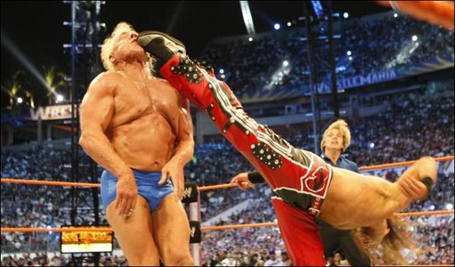 Because the three above it are absolutely the three best WrestleMania moments of all time. If there are another 1,000 WrestleMania shows, odds are good that the next three we cover will still be (in some order) at the top of the list. Other than that, this is a perfect moment.

Oh my, where does one begin? Richard (possibly "Fred") Fliehr was an orphan, whose adoption was arranged by the Tennessee Children's Home, infamous for rampant fraud including falsifying the biographies of the children being adopted. A football teammate with Greg Gagne, Flair found his way to Verne's wrestling school in Minnesota. He wrestled with the AWA, and competed all over the world before finding his way to Jim Crockett Promotions.

He took on the moniker of "The Nature Boy," intentionally stealing it from Buddy Rogers, who feuded with him briefly over the nickname and laid down for him in their only match. Ten years after he first set foot in the Minneapolis barn to begin training, the charismatic, 32-year-old Flair won his first world title, beating Dusty Rhodes to become the 26th NWA world heavyweight champion.

He would hold the title for over 600 days before losing it, only to regain it a few months later. All-in-all, his career would span 16 officially recognized world championships (close to 30 unofficially) with NWA, WCW, and WWF.

Most of his success came with NWA/WCW, which, for much of his time there, featured him as their top star and attraction. Time and the changing landscape of wrestling robbed many of his golden-era contemporaries of their spots in the business, but in the last full year of WCW's existence, Flair won the world title two more times (granted, so did Vince Russo and David Arquette, but go with me).

When the WWF finally put WCW out of its misery, Flair made his return to wrestling at the tail end of the InVasion storyline. Though he wrestled occasionally, his first months back had him working more with a suit and a mic (nothing wrong with that when it's Flair wearing the suit and holding the mic). As WrestleMania 18 approached, he was booked against Undertaker in one of the featured matches on the card.

Initially nervous about competing on such a grand stage, Chris Jericho recounted in his autobiography that he gave him a pep talk reminding him of his already-legendary place in wrestling history. After WrestleMania 18, Flair began working an almost-full time wrestler's schedule, working TV and house shows, and holding multiple titles.

As the road to WrestleMania 24 was just starting to take shape, Flair returned from a brief hiatus in Nov. 2007 to announce that he wasn't done with wrestling and that he would never retire. Thus the "career threatening" angle began, with Vince McMahon announcing that the next singles match he lost would be his last. From November until March, Flair won "career threatening" matches against Mr. Kennedy, MVP, Umaga, William Regal, Triple H, and even McMahon himself.

In the weeks leading up to WrestleMania 24 it was announced that Flair would become the first active wrestler ever inducted into the WWE Hall of Fame. If there was ever a doubt how Flair's career would end, that seemed to dispel it. Shawn Michaels made the announcement and was then challenged to a WrestleMania match by the "Nature Boy" himself.

Flair's walk down the aisle almost found a spot on this top 10 list, and if there had been a helicopter involved it would have made it. Sporting his Carolina blue, Flair stopped halfway down to show off his flashy robe, while an explosion of fireworks lit up the open air in the Orlando sky. The shot was perfectly captured, and more than befitting the legendary competitor's final match (okay, not really final, but let's pretend).

The match was as good as it could be, made better by a very engaged crowd that was never silent, or light on "woo's." The twenty minute match started strong with Michaels driving Flair to the mat with a shoulder block. Flair took a turn with the offense, taking Shawn down with a hip toss (and a strut).

Then things got fun. Shawn gave Flair a slap across the mouth busting his lip ("first blood, brother") then Flair went to work with some of the stiffest chops of his career. The two went back and forth for the next five minutes, working a mostly "Ric Flair" type match, until the "Nature Boy" found himself outside the ring, coming face-to-face with a moonsault that took both men to the ground. Flair locked in the figure four to kick start the second half of the contest, and a bridging pin was almost botched when Flair lacked the strength to pick Michaels up.

Late in the match, Flair hit his patented chop block, and the "Heartbreak Kid" got a close two-count on an inside cradle. A second figure four gave the fans another tease. With Michaels reeling, Flair began to woo and strut, strutting right into a Sweet Chin Music out of nowhere. There was a murmur in the crowd at this point; they thought it was almost time, but the two men weren't done yet. They traded blows and chops, Flair even managing to get in a "vintage" low blow and nearfall.

Finally, "HBK" hit another Sweet Chin Music out of nowhere. Flair hit the ground and crawled to the corner. Michaels took to the other corner. Waiting. And then the moment: Flair got to his feet, waved for Shawn to bring it on, tears already in his eyes. And then Shawn told his idol he was sorry, and hit the kick.

Jerry Lawler on commentary was talking as the kick happened, but as soon as it did, he interrupted himself with a genuine "ohhh" that was probably echoed by everyone watching it. I remember seeing it and saying "that's it." And it was. Flair fell like a stone, 1-2-3, he was sobbing, and it was over. The Citrus Bowl immediately began cheering, not for the finish, but for the man. They didn't stop until Flair had walked out of their sight.

Tarnished only slightly since Flair has wrestled in the time after the match, but if it's on TNA does it really count? Personally I'm okay with a "retired" wrestler coming back for a special match here and there; so long as he stays retired as an active full-timer. Going by the mantra "if it's not on WWE TV it didn't happen" Flair is still and will always be retired.

The impact of this moment was felt not by the loser of the match, but by the winner. HBK would go on to have his absolute best year since returning, and maybe in his career, feuding with an angry Batista, bitter over Shawn's supposed satisfaction in retiring his mentor, and with a quietly enraging Chris Jericho, poking and prodding Shawn to admit that he's a phony over his post-WrestleMania grief.

Shawn's redemption in defeating Jericho and getting the Flair monkey off his back gave him the confidence to challenge Undertaker, coming just short...which led to his obsession to have a rematch, where, ultimately, it would be he whose career was ended.

As to Flair, a legendary career ended the way it should have. Not in some half-filled arena at some WCW B-show, but on the grandest stage of them all. He was given a proper 3-day send off, starting with a HOF induction, and ending after RAW went off the air, on the shoulders of his peers with Big Gold on his shoulders.

That's number four on our list. Any thoughts about this one? Write them below!

We're down to our final three. Tomorrow's moment was little-seen when it first happened, but the after effects are still being felt today.