The Greatest Moments in WrestleMania History #5: Hulk Hogan hulks up against The Rock in Toronto

Counting down the 10 best, most unforgettable moments in "WrestleMania" history. Up next is number five: Hulk Hogan hulking up against The Rock while the crowd goes wild in Toronto at WrestleMania 18.

Share All sharing options for: The Greatest Moments in WrestleMania History #5: Hulk Hogan hulks up against The Rock in Toronto

On to number five:

5. Hogan hulks up against The Rock and Toronto goes bonkers at WrestleMania 18 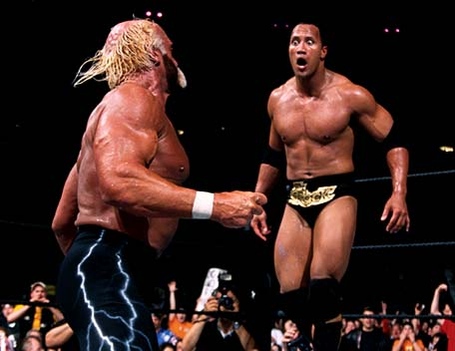 As with a few entries already discussed, it's a moment we've seen many times. We've seen big ladder spots, we've seen confetti falling on a new champ, we've seen the Undertaker do his slow walk down the aisle, and certainly we've seen Hogan "rise to one knee, shake head, hulk up, no sell, point, block a punch, punch-punch-punch, Irish whip, big boot, leg drop." You know the sequence without having to re-watch any Hogan match, because if you've seen one Hogan match, you've seen them all, and therefore you've seen "the moment" many times when the crowd goes bananas (as Gorilla would say) for the hulk up. What makes this one special is the sheer level of bananas the crowd went, and the improbable nature of it all.

The year was 1993, Hogan had effectively had his "goodbye" match at WrestleMania 8 a year earlier, after which the steroid accusations began in earnest. Hogan hadn't been seen on WWF TV until after the Royal Rumble leading to WrestleMania 9. His spot in the company upon his return was the lowest it had ever been since Hulkamania first ran wild. He wrestled in a tag match in the mid-card of the big show, and-having already stopped doing house show appearances-seemed to be on his way out but for the WrestleMania paycheck.

That is, until he inexplicably walked out of the show with the title. Even then, it was clear Hogan was not "back." He disappeared for a few months only to lose the title in his first defense, in the mid-card of the inaugural King of the Ring PPV. He then jetted from the company and sat out the remainder of his contract.

As soon as he was able to, he signed with WCW, literally receiving a ticker-tape parade down the streets of Orlando. He won the WCW title in his first match and "Hulkamania took off again brother!"

Not really, but delusion is a powerful thing.

At this point, loyal WWF fans had pretty much turned against Hogan as a money-grabbing back-stabbing no-good shell of his former self. Loyal WWF workers simply shrugged and said "Seems like the same guy as he always was."

As Hogan turned heel and the New World Order (nWo) angle helped cement WCW as the more dominate pro wrestling company, resentment among WWF fans and loyal workers only intensified. As word began to leak out (and play out on screen) concerning Hogan's backstage politicking (Starrcade 1997, for example), fan resentment turned to outright hostility. As the Internet wrestling community (IWC) started to flourish the general consensus among fans was "Hogan...*spit*"

The fiasco at Bash at the Beach 2000, make of it what you will, did nothing for WCW's ratings, nor did it slow their inevitable demise, which only cemented Hogan as someone past his ability to influence wrestling in any way, much less for the good.

Once Vince McMahon bought out WCW in early 2001, there was idle talk that maybe Hogan would make a comeback, if only for a WrestleMania payday. Many dismissed the idea, assuming that Vince would never accept him back, even for the chance to make money off him. Silly marks.

In February of 2002, Hogan, Hall, and Nash officially returned, as part of the original nWo, to the company that made them stars. Together they launched a feud against the top two babyfaces in the WWF, Stone Cold Steve Austin and Rock. Let's pause and admire the days when Rock actually was the most electrifying man in sports entertainment:

Back with us? Okay. Rock vs. Hogan was made official soon after, with a stare-down on Raw that was but a taste of what Toronto would bring. The fans at the Raw taping screamed wildly, with a "Rocky Rocky" chant that seamlessly turned to "Hogan Hogan" like the changing of the wind. The assumption was that Toronto -- hosting its first WrestleMania since WrestleMania 6 -- would give a similar 50/50 reaction.

As the show approached, Hogan worked as a straight heel, at one point trying to murder Rock with a tractor trailer semi. Yet the crowds cheers only grew louder and louder. This is WWF Attitude, brother. If you're not trying to run over your opponent with a car, you're not trying.

Hogan would later say that he was upset that he wasn't getting more heat. I'm just going to leave that without any snarky comment about how Hulk Hogan is upset he was getting cheered over the most popular babyface in all of pro wrestling.

When the day finally arrived, long before the match, it was clear this would be no split reaction. Rock had a backstage segment with Jonathan Coachman, and as soon as his not-roided up body hit the screen, a chorus of boos echoed through the stadium. His segment was strong (hilarious, even) and once Rock started into it, the crowd was in his hands like usual. Though when he turned his attention back to Hogan, the crowd was back to booing him. It was certainly an omen, and the best was yet to come.

Once the match started, there was no doubt about it. Toronto was not 50/50, not 70/30, to be generous to The Rock it was about 90/10 in favor of "Hollywood" Hogan. The match certainly was no technical masterpiece, but it was a great WWF heavyweight fight. If you were to break it down, the first third of the match was Hogan vs. Ultimate Warrior, the middle third was Rock vs. Steve Austin part one, and except for the actual finish the final third was Hogan vs. Randy Savage.

Hogan and Rock traded power moves to start with, and the crowd was totally soaking Hogan up. It was like 1987 when Hogan was on offense, and 1997 when Rock went to work. They spilled to the outside, a la Rock vs. Austin part one (and part two ... and part three, come to think of it) until making it back in the ring to trade signature moves. Hogan tried all he knew to get over as a heel.

But since Hogan is a product of the 80's boom, working as a heel for him meant abdominal stretches and back rakes. The crowd therefore saw everything he was doing as one big fat nostalgia act from the most perfect man to do a nostalgia act; they loved every second. Then came the final third, and the near falls leading to the finish.

Now, mind you, we have all (minus Hulk Holland) had many negative things to say about Hulk Hogan on this site, myself included. But whenever possible, I am first and foremost, a shameless mark. When I have to be jaded, I will be jaded. I won't bury my head in the sand and cheer (for example) for Cena because "That's What I'm Supposed To Do." But when I can get excited, brother, I will get excited. If you can't enjoy watching pro wrestling, then why are you watching it?

It's two oiled up dudes in their underwear rolling around a ring. There has to be something that hooks you. I will freely admit, when the crowd starts roaring, and Hogan starts hulking up, on special occasions it can hook me.

Hate him all you want, try to dismiss him all you want, but you can't deny that there were 60,000 jaded, Attitude Era wrestling fans, frustrated with the bungled invasion and overall malaise of the company, literally jumping up and down at the sight of this old man (who they know is a politicking, backstabbing, self-serving locker room cancer) doing his shtick that he'd been doing for literally 20 years.

It wasn't that they'd forgotten; it was that, in that magical WrestleMania moment, they didn't care. They had been hooked; made kids again. The way they counted down Hogan's "finger point, block, three punch, Irish whip, big boot, leg drop" combo wasn't just out of excitement that they were seeing it, it was excitement that they were seeing it again, live and in person, for what-as far they knew-might have been the last time ever.

It's such a goosebump-inducing moment that every time I watch it, when Hogan hits the leg drop and the crowd counts along 1-2-, I think "he should totally go over right here. That would be the perfect ending." Separated from the match I know that Hogan totally should not have won, and it's good that he didn't. But in the moment, every single time I see it, I'm counting to three along with all the Toronto fans, throwing my hands up angry that Rock kicked out at two.

The impact was felt immediately after. Hogan turned babyface and went on a nostalgia run that peaked with his winning the title the next PPV. He became a featured player on SmackDown in 2002, putting on great matches with Chris Jericho on the house show circuit, and (mostly/not counting Survivor Series 2002) staying out of the politicking. His body began to break down after that and he ended his full time second run soon after a win over Vince McMahon himself at WrestleMania 19.

Sure, he was getting cheered a lot leading up to WrestleMania 18, but if Toronto doesn't come out 60,000 strong in favor of Hulkamania, who knows what happens to Hogan. He probably eventually turns face anyway, but with far less momentum behind him. The impact of that match-highlighted by that moment, perfectly captured in the above picture-proved that sometimes, it's okay for even the most jaded fans to be mark out and just enjoy this silly fake sport.

So that's number five. Tell us what you think below!

Tomorrow, we'll be looking at number four and the moment that marked the end of a legendary career.