Counting down the 10 best, most unforgettable moments in "WrestleMania" history. Up next is number six: Shawn Michaels and Razor Ramon tearing the house down with a ladder in the ring at 'WrestleMania 10'.

What are the indelible images that make WrestleMania unforgettable?

This is not a top 10 list of the greatest WrestleMania matches, nor are we counting down the best feuds in WrestleMania history. These are the flashes of unforgettable-ness, if you will, where, to quote Jim Ross, you have an "out of body experience" and think "Wow; this is WrestleMania."

This is a countdown of the most memorable "moments" in WrestleMania history. You can find part one in our story counting down numbers 10-7 by clicking here.

On to number six: 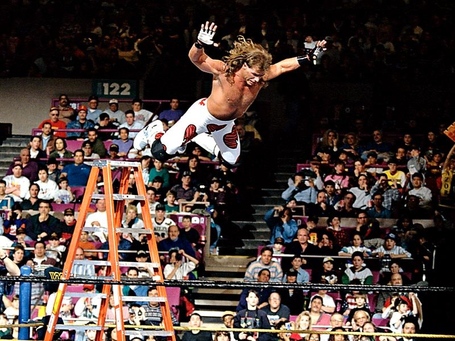 "The game is changed."

The match and moment are both hilariously tame compared to future ladder matches. Now-a-days the splash off the ladder is an early-match move designed to give the crowd something to cheer for as they work toward the real spots. Although, it was bone-chilling at the time, and the biggest spot in the match, it's still just a splash.

Shawn's run as a solo competitor began in late 1991, winning his first Intercontinental (IC) title a year later, trading it back and forth with his former tag partner, Marty Jannetty (who?). By mid-1993 he was one of the hottest mid-carders on a roster with few true superstars.

In September, however, he was -- depending on who you ask -- either fired for a positive steroid test, or quit after being stripped of the championship for refusing to drop the title. Michaels has always maintained his innocence (in both cases), and really, how could "The Heartbreak Kid" get a positive test and never Lex Luger? Regardless, Michaels left, stripped of his IC title. He left the company and the belt behind for a time.

Razor came to the WWF in 1992, pitching to Vince the idea of a Cuban-American wrestler with a voice that parodies Scarface. Since Vince doesn't have time for scarfaces or other things we mere mortals call "fun" he jumped on the character, assuming Hall was just spitballing these ideas on his own. Had the Scarface character been rejected, we might be talking about a match between Shawn Michaels and Fredo "The Razor" Corleone. Slowly, he gained in popularity until, by late 1993, he was a full-fledged babyface, winning the then-coveted Intercontinental title that Michaels had recently been forced to vacate.

Michaels would return soon after, sporting his own copy of the IC belt and claiming -- as legitimately as one can in a fake sport -- that since he was never beaten, Razor was not the true IC champ. The feud grew until it was announced the two would settle the dispute at WrestleMania 10. Since both men held a claim to the championships, both belts were to be suspended high above the ring, and the only way to win would be to climb a ladder and retrieve them.

This is of course not the first ladder match, as "HBK" and Bret Hart are credited with the first (at least mainstream) contest two years prior. If you've seen the Greatest Rivalries documentary focusing on the Hart-Michaels feud, you've seen it. It's okay from a historical standpoint, but there's not much to it.

It's funny because on that DVD, Bret expresses some bitterness (SHOCK OF ALL SHOCKS) in that he told Vince about the ladder match concept but only had one condition: that he gets to be in the first real showcase of the match. Judging by the original Hart-Michaels match, and comparing it to the WrestleMania 10 contest, it's safe to say Vince made the right choice not keeping that promise. There's an intensity to it that the original didn't have.This match needed to be worked in the Shawn Michaels style, not the Bret Hart style.

Besides, Bret was going to be extra busy at WrestleMania 10, and Vince needed a showcase match separate from the title scene. Shawn returning from suspension, having never lost the title, and Razor getting good reactions as champ made for the perfect opportunity.

The early going of the match is great tension building. Even before the bell rings, you have another great WrestleMania moment, with Shawn feigning walking under the ladder, but instead smirking at the camera and wagging his finger at the idea. One of the forgotten facts about this match is how well it was staged from a psychology standpoint. This isn't the standard "spot-setup-spot-rest-setup-spot" type of contest to which the ladder match would later devolve. This felt like an actual wrestling match, with the ladder serving as a both a tag partner and a handicap opponent to both men.

Indeed, the early minutes of the match were simply a standard fast-paced wrestling contest. If it weren't for the occasional shots of a red ladder standing in the isle, you wouldn't even know this was a "gimmick" match. It's not until Diesel gets involved (clotheslining Razor outside the ring), and is subsequently thrown out does the real "ladder" match begin. And once the ladder enters the ring, the match takes on a whole new dynamic. The ladder is thrown, slammed, and driven into both men, while the audience's excitement rises with each shot.

Just before the splash comes another moment that might've made the cut in a top 20 countdown: Michaels climbs the ladder reaching for the belts when Razor makes a desperate grab at his pants to stop him. The tug pulls Shawn's perfectly shaved butt out of his pants, causing the female contingent (and any readers of Playgirl) to squeal with delight. Instead of pulling up his pants, Michaels just does the elbow drop off the ladder, cheeks flapping in the wind as he falls. After that he picks Razor up, calls the spot, slams him to the mat and climbs up the ladder.

Unfortunately, the commentary here is really subpar. First of all, King calls the spot before it happens, ruining the mystery of just what Shawn would do. Then Vince (in his patented "fake an old man voice" style he used on play-by-play) simply says "unbelievable" upon impact. The wrestlers sold it great, the crowd went wild, but the booth was mild. Considering this is probably the moment from WrestleMania 10 that replays over and over when highlight packages are shown, it's a spot that deserved a little more fire from the booth.

To be fair, it is possible Vince's usually solid commentary was hindered by his being genuinely scared to death that the future of his main event scene were, in his eyes, nearly killing themselves. What must he have been thinking years later when Edge and Undertaker had a TLC match?

Already, we've highlighted a moment from a future ladder match; one that had more high spots in its first five minutes than this contest had in all 20. Nevertheless, without this contest, TLC never happens. Without this match, there is no Money in the Bank. Wrestling was well-known for gimmick matches, with bull ropes and cages, lumberjacks, and battle royals, but those were still conventional, at least in their choreography and pacing.

This match took the combatants airborne. It is to wrestling what 3D was to gaming in the mid-90's; it opened up a new dimension and created a whole new canvas for wrestling's artists to paint a new kind of masterpiece. It inspired men like Jeff Hardy and Edge the same way Macho Man and Ricky Steamboat at WrestleMania 3 inspired Shawn Michaels and Scott Hall.

There's number six, folks. Tell us what you think in the comments below.

Tomorrow our number five WrestleMania moment comes from Toronto, Ontario, Canada, and the queen mother of all mark out crowds.