TNA takes their show on the road this weekend for their latest pay-per-view (PPV), the 12th edition of Slammiversary!  Coming to you LIVE via your cable or satellite provider, broadcasting from the College Park Center at the University of Texas-Arlington in the heart of the Dallas/Fort Worth metroplex, the show features an array of title matches, a couple with stipulations, guest stars, a Hall of Fame announcement and more!

Slammiversary XII comes at a tumultuous time for TNA, both in the ring and out.  An injury has caused a last minute audible for the show's main event.  Even before that, several matches and conditions were announced on the 'go home' edition of Impact or later, and rumors have been swirling that talent and/or management were attempting to raid Ring of Honor (ROH) for talent to appear on the card.  Their track record of packing houses outside of the Impact Zone isn't good, and they'll be trying to sell PPVs opposite an NBA Finals game, and in a month with two WWE Sunday shows and ROH's debut PPV.

But let's set all that aside (or at least most of it, this is an wrestling website in 2014 - not an 80s Apter mag) and look at what is a packed card! 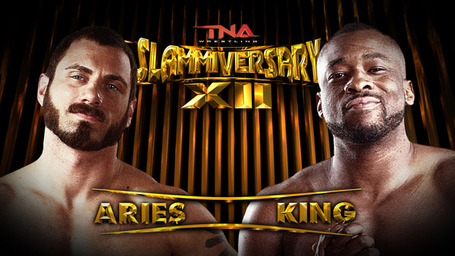 A-Double has been a peripheral player in the main story of MVP's alliance vs. TNA World champ Eric Young, but he gets a chance to step center stage in this match against his form ROH protégé King.

Kenny's return was hyped with a series of "King of the Night" videos setting him up as a playboy heel, and upon arrival he worked a mini-program against MVP (and Bobby Lashley) as a spoiled bad guy upset that the new babyface authority figure wasn't giving him his due.  That was explained away as subterfuge to distract from the two aligning once MVP turned, and since then King has shared mic time and done some jobs for the boss.

Aries is in the camp of faces that are disappointed MVP lied to them about his intentions when he took over wrestling operations from Dixie Carter.  His loose allegiance with EY, Bully Ray and Samoa Joe has given him direction for the first time in months, but he's been cast in the same third wheel/red-headed stepchild role as King when compared to his allies.

The news about MVP's knee set up the stipulation.  While I think there's a chance that the triple threat doesn't end up a two-on-one of alliance heels against Young, I don't think Aries has much of a shot of being the one that busts out of that formla.  The two have good chemistry dating back to ROH, though, and should deliver a good match in whatever time they're given. 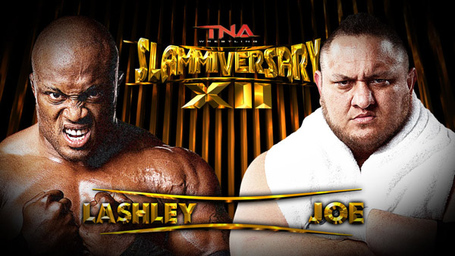 Joe doesn't have a ton of history with Lashley outside of the last few weeks, but he does have a strong case for being deserving of a title shot.  He was routinely on the screwee end of the numerous screwjobs that marked Magnus' reign, and his motivations since returning to television a few weeks ago have been as focused on his competing for the belt as they have on grand notions about what's best for TNA or pro wrestling.

Lashley seemed like a special attractions guy - TNA's bargain basement Brock Lesnar - until they linked him to MVP full-time.  Since then, he's served as the quiet muscle of the stable.  He was rumored to be getting directly placed into the World championship match when MVP's knee injury was still undiagnosed; instead he gets a shot at working double duty with this match.

This should be a fun one.  Lashley isn't a great worker, but when things are tailored to his power game he can deliver a good match, and Joe is a versatile performer who does slobberknocker just fine.  There's a compelling story to having the Samoan Submission Machine in the main event...he could almost play a tweener out for himself in between the earnest champ and an alliance member, but it's just as likely they go with EY against both of MVP's lackeys. 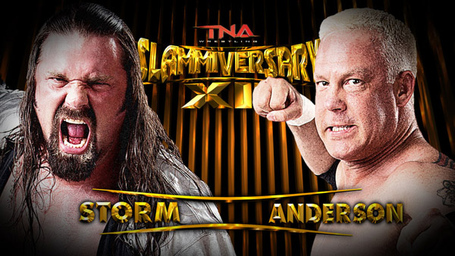 Speaking of tweeners, I honestly have no idea who is the heel and who is the face in this feud.

Anderson is coming off a win in his last program against Samuel Shaw, while Storm did all of the losing in putting over his former tag partner Gunner.  Those two have been bonding over at the "funny farm", as The Asshole calls it, so having these two both comes across as dicks may be on purpose to lead to a tag feud down the line.

In the meantime, the build here has revolved around Anderson mocking Storm's drinking.  It's not my cuppa, but it is nice that TNA takes the time to build up mid-card programs.  I just wish those programs were for fresh faces and not WWE washouts or guys for whom TNA has already screwed up pushes. 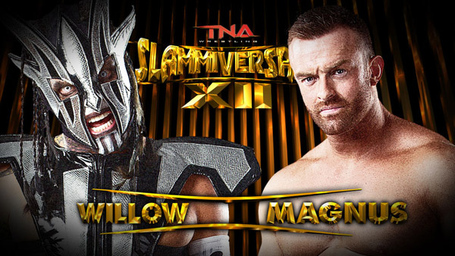 Willow (with Abyss) vs. Magnus (with Bram)

Former World/paper champ Magnus has also been the focus of a good mid-card build, and he needed it coming off of his weakly booked title run.  His psychotic childhood chum Bram returned and inspired him to bring back his vicious side, leading to a recent pry bar attack on Jeff Hardy's alter ego, Willow.

We can debate whether or not it makes sense to hide your most marketable star behind a mask and fake name, but it seems like it was the price TNA had to pay to keep Hardy, so...that's that.  The gimmick is entertaining, albeit for a lot of fans, for the wrong reasons.

Abyss changes character alignment more often than The Big Show or Mark Henry, but there is some recent history between he and Magnus, with the Monster serving as bodyguard for the Brit during the tail end of his championship and becoming disillusioned with the champ's dishonorable ways.

Expect everyone to get involved and for this to take on some hardcore match affectations.  Those should be used to protect whoever loses, and with an already crowded title picture, I'd expect this feud to continue. 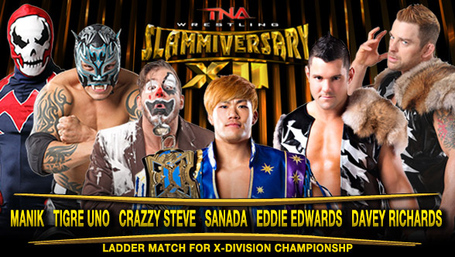 Manik vs. Tigre Uno vs. Crazzy Steve vs. Sanada (c) vs. Eddie Edwards vs. Davey Richards - Ladder Match for the X-Division Championship

Just announced this week, there has almost literally been zero build for this.  Sanada was the subject of some well put together video packages earlier in his run, during his best two-out-of-three series with Tigre Uno.  Crazzy Steve is, as you may have guessed, crazy, but has been limited to a creepy comedy role in The Menagerie stable until now.  The Wolves are tag champs, and were recently forced to compete against one another by MVP, but there doesn't seem to be any storyline dissention between the two.  And, hey look, Manik is back!

Should be a thrilling indy spotfest and possible match of the night candidate, if thrilling indy spotfests are your thing.  Sanada will probably retain, depending on how much longer he's on loan from Japan's Wrestle1 promotion and what the conditions of their deal with TNA are.  Otherwise, a Steve win wouldn't be totally crazzy. 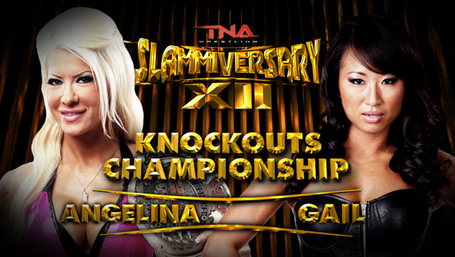 If it's PPV, it must be time to book Gail Kim in a title match.

Like the last few Knockouts championship affairs, it kind of seems to disregard the big story from Impact - which currently involves Brittany's love/hate obsession with Madison Rayne - in favor of whoever's turn it is in the rotation for a PPV payday.  And since the entire women's division on Impact these days consists of six women, well...it doesn't take that long to rotate around. 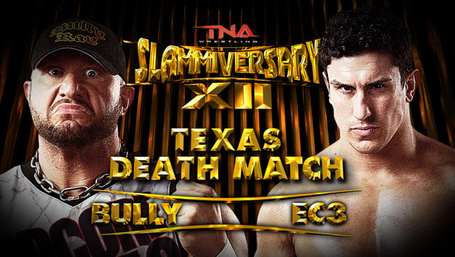 For those wondering, a Texas (or Mexican) Death Match is a Last Man Standing match where a participant must be beaten by conventional means (pinfall or submission) THEN fail to get to his or her feet before a ten count from the referee.  TNA has a history of using famous match type names and adding their own wrinke to it (see: Gauntlet matches), so I'm not 100% sure that's what we're getting here, but now you know.

Bully is after clan Carter due to Dixie donning a disguise and costing him a match against Bobby Roode at Sacrifice.  EC3 is defending his family name and his "undefeated" streak in TNA.  Both are also tied up in the program centered around MVP's alliance, with Aunt D recently declaring war on the current power players after the beatdown Ethan for taking the loss in a First Blood match against a five-pack of faces.

Long story short - between the match type, the intersection of storylines and Dixie Carter near certain involvement, this should be booked to the gills.  Rockstar Spud will go through a table, Dixie might, the younger heel should win, but the plan is to feature Bully prominently during their summer New York area shows, so he might go over and will definitely be positioned strongly coming out of this either way. 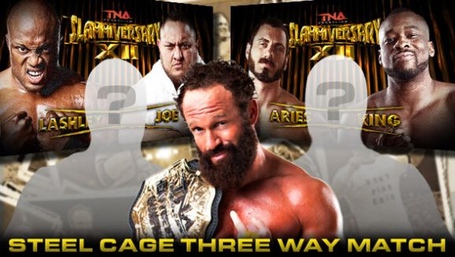 Montel Vontavious Porter doesn't think that EY is best for business an A player a deserving champion, so he set the stage for the right man to be on top of the company...him.

But then, he tweaked his knee doing an independent show, that was diagnosed and he was deemed medically unable to compete at Slammiversary, so we have the qualifying matches featuring his allies and a three way dance for Young's strap.

Word on the screens was that TNA was planning to take the belt off of Super Eric and give it to their most over heel, MVP.  The decision to move the title to Young was always something of a hot shot, and with ratings mostly declining during his time as champ, conventional wisdom said it was time to move on from the experiment.

While the sudden change hampers whatever plans TNA Creative had here, it does add suspense for the fans, as there are cases to be made for Young, Joe or Lashley to come out of this with the belt.  Whichever way they go, the match itself will most likely be rife with run-ins, interference and TNA's typical brand of schmozery.  Dixie Carter has sworm revenge on MVP, and whichever men or factions come out on the losing side of the preliminary bouts will almost certainly factor in to this match.  And that's before even getting into the fact that referees have been central figures on Impact during this storyline.

There your have it, scripted fight fans.  In addition to these eight bouts, Kurt Angle will announce who will join he and Sting in the TNA Hall of Fame (I honestly have no idea who'll they'll go with here - the two most "deserving" names, Jeff Jarrett and AJ Styles, aren't likely to sign up for anything that will promote TNA right now).  A couple of Von Erichs will show up, which just sounds depressing to me, but your mileage may vary.

Who's buying Cagesiders?  And if you are, what matches are driving your decision?