Can a comic book earn respect for pro wrestling?

Mike Kingston thinks so. Check out our conversation with the creator of Headlocked about wrestling, comics, what they have in common, how his book seeks to elevate them both and what you can do to help.

Share All sharing options for: Can a comic book earn respect for pro wrestling?

A few weeks back, we brought you a review of the first four issues of Headlocked, an independent comic book about a college drama student pursuing his dream of becoming a pro wrestler. If you missed it, well, you can just click on that link there, or take our word that it's a book that shows a lot of promise that fans of comics or pro wrestling would enjoy.

The creator and writer of Headlocked is a life-long fan of both comics and wrestling from upstate New York named Mike Kingston. He and I got a chance to have a convo about the book, how his quest to get it published mirrors his protagonist's quest to become a wrestler and what the future holds in the real and fictional worlds. This was all a part of Kingston's big final push for his Kickstarter campaign to fund the next round of stories. If you haven't yet, go check it out, and if it seems like something you might be interested in, help a fellow fan out. 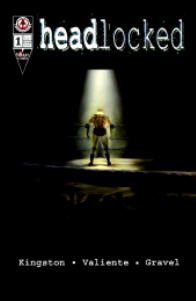 The existing four issue arc of the story (available as a collected edition here) was funded by Kingston alone over the last few years. His initial Kickstarter goal of $16,000 is just to cover art costs. Like many fans trying to break into a field they're passionate about, he has a full-time job. "But in order to get the book out in a timely fashion, I need my artists not to," he says.

A primary vehicle for distribution and promotion has been shows: comic book conventions like San Diego Comic-Con or the Baltimore Comic-Con where he was this past weekend, or WrestleCon on WrestleMania weekend. But sales and buzz there doesn't translate into attention from publishers, who often can't get past the stigma of "wrestling comic", or into retail shops that typically only stock books from the "big two", Disney-owned Marvel Comics and Warner Bros.-owned DC Comics.

The Kickstarter, and the funds raised with it, "is the only thing I have to take to publishers, retailers and distributors and can say, ‘look, we sell some shit'. Because that's always been the big battle with them because there have been so many shitty licensed comics over the years. People just don't understand - otherwise, it's just another wrestling comic and wrestling comics don't sell. I have to fight that perception. If you spend two seconds with it, you realize it's actually a completely different kind of story but I'm never really afforded that opportunity."

Just like the average person on the street will only know WWE or maybe TNA, with comics, everyone knows The Avengers and Batman, but not much else. "It's very hard to break in with something outside of the established genre and mode (big crossover superhero books)."

The history of pro wrestling in comics does not help either. Mike says that no sooner has he posted something on a website about Headlocked, "within five minutes the naked Santa Ultimate Warrior jpg gets put up. Wrestling books have only been produced to make a quick buck for the licensee and to sell action figures for the licensor." 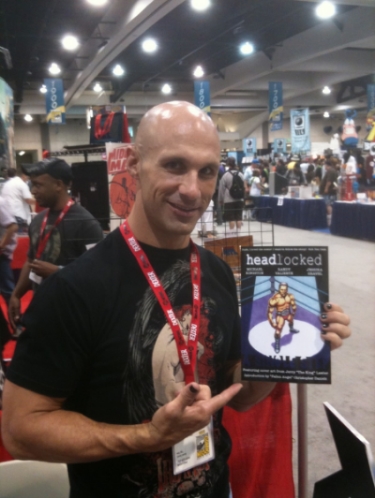 It's for precisely that reason that so many wrestling professionals flock to support the book - they're excited for a realistic (if not always flattering) portrayal of the business in which they toil. "I've had guys beg me to be in the book, I've had people's agents contact me. I'm not here to put people over, though, I want people that have passion for comics and wrestling because hopefully that passion comes through in the product."

WWE's Jerry Lawler was an early supporter, and someone Kingston is now proud to call a friend. The King's painted covers adorn many editions of Headlocked, and the pair will be at New York Comic-Con this fall promoting the title. TNA's Ken Anderson and Christopher Daniels, former WWE and independent star Gregory "Hurricane" Helms are all supporters of and future contributors of short stories to the project. Former wrestlers and now full-time artists (who Kingston pays for their work) Beth Phoenix and Sinn Bodhi will contribute pinups.

Jill Thompson, an Eisner Award winning comics creator and friend of CM Punk and Daniel Bryan, will contribute chapter break pages. Comedian Judah Friedlander of 30 Rock fame was recently announced as the writer of the introduction for the new stories.

The work he's done and the frustration he's experienced getting the book out there parallels the struggles of Headlocked's protagonist, Mike Hartmann. "The main character's emotional journey mirrors mine, because I've been trying to get this thing off the ground forever." Kingston says that his comic "is my defense of wrestling and my defense of my wrestling fandom after 30 some odd years of having to defend it to everyone."

It's an answer from a guy who has "consumed pretty much anything I can get my hands on for my whole life. I read the Observer, I watch shoot interview...because I find all that stuff kind of fascinating." And also someone who gets frustrated because when people create fiction about pro wrestling, it tends to look down on wrestling fans. "It amazes me that Ready to Rumble got made to market to wrestling fans, but the main characters are portrayed as idiot wrestling fans. I mean, you can feel the derision."

Mike and I talked about the role that wrestling and comics play in keeping themselves in a kind of pop culture ghetto, whoring themselves out to any z-list celebrity or pro athlete who wants to write a book or run the ropes. As fans of Chikara, we agree that you can put out something that's not 100% "serious", but that is still passionate about the craft and not treated like rubbish.

Like a lot of us so-called "smart" wrestling fans, Kingston says, "What it is in the ring is awesome, but there's this whole world behind the curtain - beyond just ‘hey, it's fake and they're cutting their foreheads' - just this weird subculture that fascinates me."

Wrestling and comics are pop-culture cousins, sharing genre staples like over-the-top stories, colorful costumes. "And they're dominated by a single aesthetic," Kingston notes, "comics have superheroes and wrestling has WWE and that limits the public's understanding of them as storytelling mediums and informs how everyone - but especially the general public - thinks about them."

"Chikara, and Japanese wrestling and Lucha are so different, but people aren't aware of any of that stuff. Same thing with comics, nobody thinks of Road to Perdition or History of Violence as a comic book."

Looking to take full advantage of the similarities is "why a lot of the characters are designed with 80s WWF/E in mind, because a lot of those archetypes are what people associate with wrestling" and accessibility is key to Kingston for the potential to change minds.

"I've had people buy the book and come back and say ‘you know, I never really thought about wrestling in that way'." 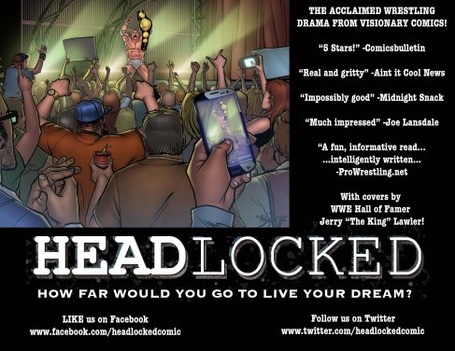 With the Kickstarter coming to a close, look for the next arc, "The Last Territory" to hit around January of next year. Much of the wrestler created content with be exclusives for folks who supported the campaign, so if that interests you, time is running out. "When I reprint those to sell them at shows, I won't include those stories," Kingston promises. "As a property, this is the most important thing that we're ever gonna do. So for people who say why the hell should I pledge when I can just buy it in a store, you literally will not be able to get these stories anywhere else. And it should have some good after-market value, I mean, you get some of those guys to sign it..."

Down the road, the creator sees this phase of his character's story lasting three to six five issue arcs. "We've made a lot of cool characters and a lot of things we want to play with, and really, at this point, he (Hartmann) doesn't know anything about wrestling. So as he learns, you also put a spotlight on these other guys and have there be at least thematic overlap even if they don't interact."

The universe that Mike and his collaborators, most notably artist Mike Mulipola and colorist Chuck Obach, are creating was one of the things that intrigued me the most when I read the preview comic for "The Last Territory", and I'm very excited to see the new work.

So, if this sounds like your thing, and if you've read this far, it probably is - check out the links and consider contributing to the Kickstarter or planning to buy the books. The worst that could happen is that you'd support a fellow fan's pursuit of his dream:

If I never make a dime but could tell the story for five years, I'd be happy as a clam.