The Martial Chronicles: The Fight of the Century

This edition of Martial Chronicles deals with boxing, rather than Pro Wrestling or MMA, but we thought Cagesiders (being the multi-faceted bunch you are) might still find this post both enjoyable and interesting. So we're cross-posting it here for you; it has also been published at bloodyelbow.com and badlefthook.com.

Share All sharing options for: The Martial Chronicles: The Fight of the Century

"The fight of the century is over and a black man is the undisputed champion of the world." Those were the opening words of former champion John L. Sullivan's report from ringside of the Jack Johnson versus James Jeffries fight on this day 102 years ago.

Since that day other contests had been labeled the "Fight of the (20th) Century". Frazier-Ali and Louis-Schmeling are perhaps the two best known today with that appellation. What all three shared in common, besides the participation of some of boxing's greatest champions, was those fights became something more than just fights. The boxers no longer represented only themselves in the ring but became symbolic champions for peoples, nations, ideologies. It is a concept that goes back to ancient times when champions representing opposing armies would meet in singles combat. Thus, Ali-Frazier was not a fight between two undefeated champions but a battle between white, Christian, middle America and a black, Muslim, counter-culture. Louis-Schmeling was not only for the heavyweight title of the world but was a clash between democratic America and Nazi Germany. The same with Johnson-Jeffries, the first fight to be labelled "Fight of the Century" and most worthy of the title. For Jack Johnson and Jim Jeffries were not the only ones fighting in the ring that day, but so were the whole of the white and black race.

At least, so thought people at the time.

In 1910, it is hard to exaggerate how hated Jack Johnson was. At least by white Americans. His December, 1908 victory over Canadian Tommy Burns in which he captured the title was not only met by jeers of "coon" and "flash nigger" from the 20,000 (white) Australians in attendance, it also triggered a general panic amongst the white race. With the realization that boxing had its first black champion, the Detroit Free Press asked:

"Is the Caucasian played out? Are the races we have been calling inferior about to demand to us that we must draw the color line in everything if we are to avoid being whipped individually and collectively?"

Henry Lawson summed up white fears with a poem:

It was not Burns that was beaten-for a nigger has smacked your face.
Take heed-I am tired of writing-but O my people take heed.
For the time may be near for the mating of the Black and the White to Breed.

White America (and other nationalities of European descent) began looking for a savior. A "Great White Hope" as Jack London coined it, who would return the white man to his rightful place at the top of the hierarchy. It quickly became apparent who they were asking to be that savior, with London being one of the first to call out his name in the New York Herald following the Burns fight:

At the time of London's appeal, Jeffries had been retired for five years and had ballooned from his fighting weight of 200 pounds to over 300. But as Johnson beat white challenger after white challenger the calls grew stronger for Jeffries, the unbeatable "Boilermaker" who had retired undefeated and unbeatable. At first Jeffries expressed no interest, but eventually the call grew stronger and he found himself practically drafted into defending his race.

While having no interest at first in the meeting, once he had decided on returning he put all his efforts into getting ready for the match, hiring wrestler Farmer Burns and former champ Jim Corbett to get him back into fighting shape. Updates of his progress became a national obsession, and most (although not all) were convinced he would put that "negro with his golden smile" back in his place.

As the white masses were rallying behind Jeffries, the same was happening with regards to Johnson and Black Americans, although perhaps less enthusiastically. Many African-Americans had a strong dislike of Johnson and his public behavior: boasting, gambling, and public cavorting with not just white women but white prostitutes (miscegenation was as unpopular amongst Black Americans at this time as it was amongst White Americans). Even Booker T. Washington denounced Johnson for "misrepresenting the colored people of this country." But when it came to the fight -- they almost universally supported him.

The contest was held on July 4th, 1910 in Reno Nevada after the original host city, San Francisco, backed down under pressure from the state. 20,000 fans arrived by rail and automobile to what, at the time, was practically the middle of nowhere. They were there to witness what was being billed as the "Fight of the Century". The challenger was a 10-6 favorite going into the contest but many of the more knowledgeable boxing aficionados, including Sullivan and William Muldoon, were not nearly as confident in the white hope. The general white public though, was in for a shock.

"It was a poor fight as fights go, this less than a fifteen-round affair between James J. Jeffries and Jack Johnson. Scarcely ever has there been a championship contest that was so one-sided.

"All of Jeffries's much-vaunted condition and the prodigious preparations that he went through availed him nothing. he wasn't in it from the first bell tap to last, and as he fell bleeding, bruised weakened in the twenty-seventh second of the third minute of the fifteenth round; no sorrier sight has ever gone to make pugilistic history." 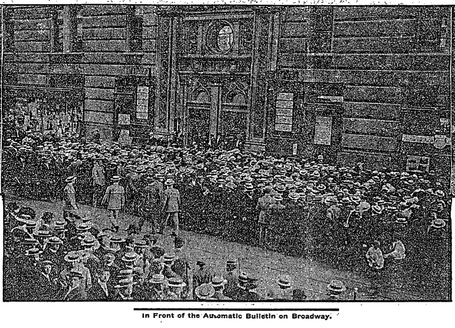 In this era before television or radio or even widespread telephones , the country was startled to find its focus completely riveted on a sporting event. Such a thing had never happened before. 30,000 (almost all but a handful white) thronged into Times Square to read the New York Times's new automatic bulletin machine:

"It seemed as if everyone wanted to Jeffries to win, and when the early bulletins told how he had landed a hard right on the ribs or planted a stiff left in the face, the crowd went wild with joy. But when the bulletins showed that Johnson had delivered a telling blow there was no cheers - just a murmur, the sounds of which showed more plainly than words that it came for from the heart."

Eventually, in the 15th round, the inevitable came as Johnson once more downed Jeffries.

"While Jeffries was not actually counted out, he was saved from this crowning shame only by his friends pleading with Johnson not to hit the fallen man again, and the towel was brought into the ring from his corner. At the end of the fifteenth round, Tex Rickard raised the Black arm, and the great crowd filed out, glum and silent.

"Jim Corbett, who stood in Jeffries' corner all during this fight, telling Johnson what a fool he was and how he was in for the beating of his life, now ran forward with outstretched arms, crying: "Oh, don't, Jack; don't hit him."

The repercussion of having their Great White Hope defeated so soundly by the son of a slave was both brutal and swift. Riots and assaults quickly swept the country. "Three negroes were killed and many wounded in a clash with whites" near Uvaldia, Georgia. Assaults were reported across New York City. A correspondent for the London Times gave a summary of all the violence for that Independence Day:

"Racial riots swept the United States last night from the Atlantic to the Pacific after Jeffries' crushing defeat by Johnson in Reno, Nevada. The following are the results up to the present---

Five thousand cases of disorderly conduct were dealt with by the police courts in various cities this morning in consequences of the rioting.

The goals (jails) in numerous cities were crowded with prisoners, in consequence of the bitter feeling against the Negroes manifested when it became known that a Black man had hammered a white man almost into insensibility and won the heavyweight championship of the world.

Most of the casualties were Negroes who were hunted down by white mobs, mostly because of boasts by the Blacks that they had finally demonstrated their superiority over the whites.

Two Negroes were shot dead at La Providence, Louisiana, after walking down the principal street of the town and announcing that a Negro could thrash a white man if he liked.

A Negro was fatally stabbed at Keystone, West Virginia for boasting in a drinking resort (saloon) that Jeffries had met his desserts and that his punishment by Johnson was a foretaste of that punishment which Negroes intended meting out to white men if the latter tried to assert their superiority in the future.

A nine-year-old white child was shot by Negroes who were riding in a motor car at Washington, the Federal capital. A white man cut a Negro man's throat in a tram car (trolley) at Houston, Texas. A Negro was shot dead in New York City.

Other Negroes were killed in Cincinnati, Omaha, Little Rock and other cities.

In the wake of the violence, the film of the fight, which was to be screened across the country, was banned from being shown less it instigate further responses from outraged whites.

The violence eventually ended, as did Johnson's reign as champion. Following his loss in 1915 to Jess Willard it would be over 20 years before another black man got a chance to compete for the most prestigious title in the sport. For the next generation, the nation would make sure that the title of champion was exclusively a white man's title (this went for professional wrestling as well).

As for the fight's place in history, perhaps no one better summed it up than John L. Sullivan, who wrote that day:

"It will go down in history as the greatest fight that ever took place in some respects, and from a purely sporting point of view the very worst."

† -- This article by our guest columnist John S. Nash crossposted to Cagesideseats.com today (Oct. 22, 2012). In addition to delving into wrestling's past for Cageside Seats, John Nash has regularly chronicled the forgotten history of mixed martial arts at our fellow SBNation Blog: BloodyElbow.com, where this article was also posted, in addition to BadLeftHook.com. Cageside Seats is proud to present a cross-posting of his article archives in this exclusive guest column for your enjoyment. To read more fascinating articles from Mr. Nash, simply bookmark this link and remember to check back frequently for new content.