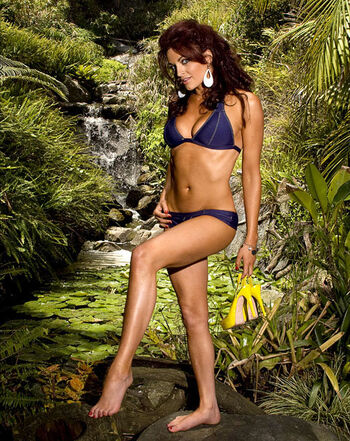 Former WWE Diva Maria Kanellis revealed on Fightful that she wants the WWE to bring back the WWE Divas Championship (AKA the Butterfly Belt).

"You had a ton of workers that came from the Indies too. It was a mix at that time. I think they should bring back the Butterfly belt. I do. I know people will disagree with me and that’s fine," she said. "That’s why wrestling is great because when you watch wrestling, you don’t see everybody looking exactly the same.

The problem with that era was the fact that practically every woman on the WWE roster at the time were cookie-cutter models such as Kelly Kelly, Candice Michelle, Michelle McCool, Trinity, Torrie Wilson, Stacy Keibler, Christy Hemme, Jackie Gayda-Haas, Alicia Fox, Maryse, Eve Torres, Brie & Nikki Bella and of course, Kanellis herself. There were exceptions to the rule such as A.J. Lee, Beth Phoenix, Gail Kim, Natalya and Paige who didn't fit the Diva mold, but for the most part, practically every woman on the roster generally had one of two characters: the prudish babyface or the mean-girl heel.

But when NXT replaced FCW as WWE's developmental territory back in 2012, major changes began to take place. Indie wrestlers who came from the likes of Shimmer, Shine and WSU have gradually started to replace the models on the women's roster thanks in large part to Triple H due to his desire of wanting the women's division to have more meaningful storylines, distinct characters and wanting the women to be treated the same as the men.

As a result, the clean-cut model-type Diva has been replaced by the more edgier type of female wrestler (bonus points if she has tattoos and body piercings) when it comes to WWE's female talents as fans care more about a woman's wrestling talent than her appearance. The likes of Becky Lynch, Charlotte Flair, Ronda Rousey, Rhea Ripley, Asuka, Sasha Banks, Bianca Belair, Bayley, Iyo Sky, Shotzi Blackheart, Dakota Kai and Nikki Ash, while most of them are unattractive, have resonated with the WWE Universe due to their wrestling ability and unique characters.

Kanellis may have been vital for the WWE during the Ruthless Aggression days but unfortunately has no place in the era of the WWE Women's Evolution.