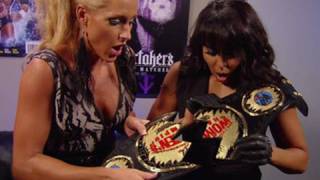 You'll never see this in the WWE ever again.

Ah, the WWE Divas Era where women's storylines, if any, were often portrayed in a far more childish manner. WWE's female talents, whether it was Michelle McCool and Layla calling insulting nicknames to their rivals like calling Mickie James "Piggie James," Kelly Kelly "Smelly Kelly" and Beth Phoenix "Glamaman" to the Bella Twins making fun of Paige's pale skin and Kharma's weight. There was also an angle where Natalya suffered flatulence as well as the love triangle involving Torrie Wilson and Dawn Marie which featured Torrie's real-life father Al Wilson.

However, it looks like those days are in the rearview mirror now that Triple H is in charge of creative as he had a disdain for cattiness in the WWE. For instance, the Bianca Belair vs. Bayley storyline from last week's RAW, which also involved Becky Lynch, Dakota Kai and Iyo Sky. The promo was fierce and intense just like a men's promo which ended with Bayley, Kai and Sky attacking Lynch with a steel chair, something that would never happen with the Divas Era. Later during the Alexa Bliss vs. Asuka match saw the trio attacked Bliss and Asuka until Belair made the save and then during Belair's match against Sky saw all six women got into a brawl.

Look for Belair to defend her title against Bayley in a Hell in a Cell match at Clash at the Castle on Saturday, September 3rd, 2022. With women's feuds being intense and brutal these days, the days of catfights and foolish storylines are now a product of a bygone period.