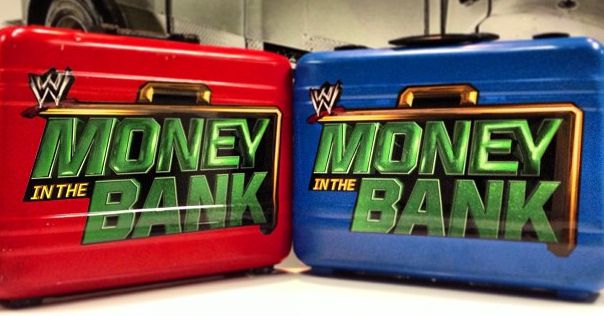 You won't be seeing these briefcases ever again.

The WWE Money In The Bank pay-per-view made its debut on July 18th, 2010 at the Sprint Center (now T-Mobile Center) in Kansas City, Missouri. It was named after the Money in the Bank ladder match which debuted at WrestleMania 21 in Los Angeles, California on April 3rd, 2005 which saw Edge defeat the likes of Chris Jericho, Shelton Benjamin, Chris Benoit, Christian and Kane. Five years later, it would have its very own pay-per-view.

And so without further delay, here was the match card and the results:

KANE WINS THE SMACKDOWN MONEY IN THE BANK LADDER MATCH

Back then, the two Money in the Bank ladder matches were divided by brand and not by gender as each match featured eight male wrestlers. Kane defeated the likes of the Big Show, Christian, Cody Rhodes, Dolph Ziggler, Drew McIntyre, Kofi Kingston and Matt Hardy to claim the blue briefcase.

Prior to the Women's Evolution, WWE's female talents should often have short matches which focused more on women's looks and not on their wrestling ability as Fox outlasted Torres in a match that lasted nearly six minutes. Six years later, the WWE retired the Divas term, as well as the WWE Divas Championship as the focus shifted from sex appeal to true athleticism.

Rey Mysterio defeated Jack Swagger in a grueling but short contest only for Swagger to perform the Ankle Lock on Mysterio. This allowed Kane to cash in his MITB briefcase to defeat Mysterio to become the new World Heavyweight Champion. Kane revealed that Mysterio was the one who put The Undertaker in a vegetative state only for Mysterio to reveal that it was Kane himself who attacked The Phenom.

In keeping with the trend of lackluster women's matches, Layla managed to defeat Kelly Kelly despite nonsensical interference from Michelle McCool and Kelly Kelly.

THE MIZ WINS THE RAW MONEY IN THE BANK LADDER MATCH

The Awesome One defeated the likes of Chris Jericho, Edge, Evan Bourne, John Morrison, Mark Henry (in for the injured R-Truth), Randy Orton and Ted DiBiase, Jr. to win the red briefcase for a future WWE Championship match in which he cashed in on Orton on the November 22nd, episode of RAW after Orton was attacked by The Nexus.

The Celtic Warrior retained the WWE title after The Nexus interfered in the match despite being a steel cage match to prevent Cena from winning. Cena and a little help from his friends managed to defeat The Nexus the following month at SummerSlam.

Times have definitely changed since 2010 as the two Money in the Bank ladder matches are now divided by gender and not by brands as not having a Women's MITB Ladder Match would be frowned upon by fans and PR as gender equality is on the rise in the last decade. Also, women's title matches are much longer these days while most of the men's mid-card matches are considered popcorn matches these days.