Because I need to let off a little steam...

Please note that the original article 94 is coming up next...

Are you sitting comfortably? Then we'll begin.

Once upon a time, before he regenerated into the Fiend like a Dr. Who in tights (but after he had regenerated from Husky Harris) Bray Wyatt came out of NXT as a fully formed creation that, if there was ANY justice in the world, would have been a 10-15 year gimmick. But unfortunately the man on top didn't get it. And in many companies, that would be fine because they would see that the worker was still getting over and so would do their darndest to get out of the way booking-wise so that they didn't accidentally foul it up.

Vince on the other hand, to paraphrase Principal Skinner, believes it's the children that are wrong. And so as Wyatt continued on the main roster so did his gimmick begin to slowly become less and less nuanced. Where as once he would talk about bringing the machine down with Daniel Bryan, a couple of years later he would proclaim himself a God and anoint opponents with...weird diagonal crucifixes (though it would help if Orton could give the slightest shit...).

Most workers would have been disillusioned to the point of asking for their release when they saw the dilution of the gimmick they created and fostered. But not Wyatt. He instead took his anger and his feelings of being underestimated and still managed to incorporate it in kayfabe to create two brand new characters. And rather than allow Wyatt to percolate on the mid card slowly, Vince saw one match and decided to book him against Seth Rollins for the Universal Title (against the wishes of Wyatt by all accounts), where Vince for some un-Godly reason decided that rather than give the hottest character in the company (possibly in ALL WRESTLING at the time) the title once he was in the match, he was going to keep it on the champ whose run was getting increasingly tepid as he flaunted his bank balance to indie wrestlers on the tweets.

So after that total clusterfuck at Hell in a Cell (which also essentially sunk Seth as a babyface, btw), Vince decided that the Fiend was worthy to carry the title, and to do the change at Crown Jewel 2019, essentially meaning that the Fiend not only was tethered to a title which restricted his character work, but they dumped a whole bunch of cold water on him to get there!

See, the thing is that the Fiend is, by all accounts, akin to a horror movie villain. So it makes little sense for others to be going after him. But when you put a title on a guy, of course they are suddenly going to have a big target on their back! Babyfaces do promos about this very thing ad nauseam in the WWE, where they harp on about how everyone wants the strap, etc, etc. When you stick something like a title onto the Fiend, you are essentially robbing him of the very impetus and agency THAT CAUSED BRAY TO BECOME THE FIEND IN KAYFABE IN THE FIRST F*&KING PLACE!!!

And I'm not saying down the line he couldn't be champion, but he's going to sell merch in the short term whether he's main event or 4th on the card because the guy behind the mask can tell a story. He is literally the closest thing to a Mick Foley that the wrestling world has today (I actually wouldn't have minded a Funhouse Bray run as commissioner down the line) but you have to give him time to show the character to the world.

But still, even despite this, he managed to create a very solid feud with Daniel Bryan, showing off their great chemistry, and bolstering D-Bry's babyface credentials in the meantime. The fact that the two of them could make the crowd pop for a possible Bryan win at Survivor Series really is a testament to both men's story telling.

So by the end of January, the Fiend was still intact. While the title did not suit him and was more millstone than crown, Bray (with the able help of Bryan) was doing enough to keep his character intriguing. So what particular iceberg caused this state of affairs to take on water? 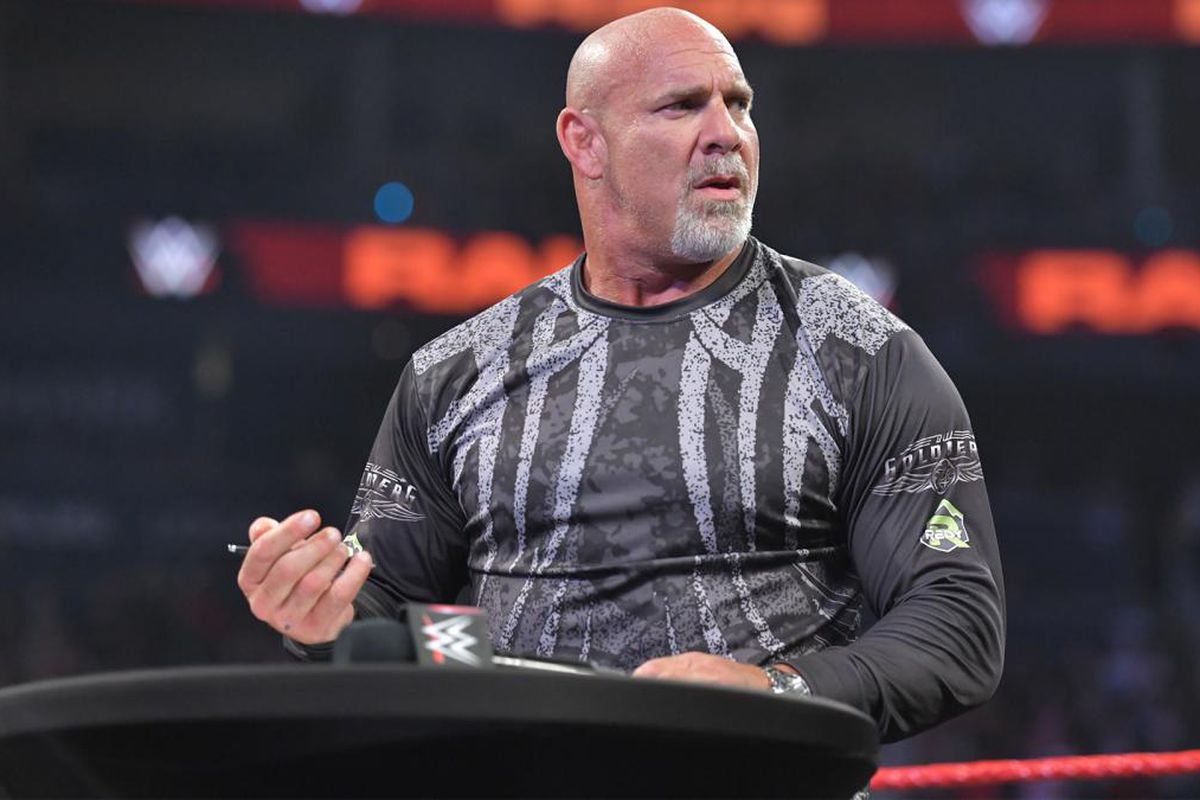 I have talked quite a bit about Goldberg during this series, Cagesiders. But I haven't really done a deep dive into why I find his character in recent WWE so insufferable. So join me as I place my academic hat on to try to explain.

To me, friends, the concept of a part-timer is not a offensive one. Having guys like Undertaker, Triple H and HBK come back and feud with your up and comers is not a terrible thing. The thing is though that these workers are workers that the fans have gone on the journey with. To set yourself against Undertaker at Wrestlemania is to be part of that heritage. But the thing is that Undertaker is a master of showing himself to be vulnerable. From Mania 21 to 29, where the Streak became a big deal, the Deadman was brilliant in the build up to a Wrestlemania in drawing the fans in to thinking that maybe, maybe this is the year when the Streak was broken. And every year his opponent would take him to the limit...and lose little from it. Furthermore, the booking was able to craft stories around this heritage because the kayfabe could build on the mystique. Just like Triple H opponents could build on his relationship with the authority, or HBK with his association with the Screwjob, or just being the Showstopper.

Which leads us back to Bill.

Goldberg's mystique is built on a rigged winning streak that occurred over twenty years ago. And to be fair this is not necessarily all WWE's fault. WCW had a good two years between when the streak was over (for boneheaded reasons) and when Goldberg called it quits with WCW, but couldn't actually think of much to add to his character. This was partly (to be fair to WCW) that Bill had a terrible habit of injuring himself or others at crucial booking junctures, derailing potentially big feuds. And at the time it probably didn't look like it was a fatal flaw, but the fact was that before his return to WWE in 2016, he had ONE pretty ordinary year wrestling in a major American promotion post-2001. So while Triple H, Undertaker, Sting, Jericho and even John Cena now can scale back their schedule because they have the volume of work and angles for the crowd to draw on, Goldberg feels...out of time.

And here's the thing- because Goldberg's streak is now 20 years old, even that doesn't really hook into the fans' subconscious anymore. The first match back in 2016 kinda worked because of the son angle...but now? He just comes back and demands a championship match because there's little else that people would see his character being motivated by.

Now some rumours have it that the original plan was for the Fiend to actually come out on top in Sweet Saudi. This would make some sense, as Goldberg really is a worker that is used by WWE now as a stopgap when you have a big championship and no feud to line up (it is why a lot of his feuds are just so...meh). However, apparently when Bill popped a rating on the Smackdown he returned and began lobbying backstage, Vince flipped the script (after flipping his f*&king lid) and demanded that Goldberg- the 53 year old wrestler who has had less televised matches in the whole of his WWE career than Bray had during his first year on the main roster of the WWE - go over.

But what made this even worse was the build.

Goldberg has often compared his wrestling persona to some sort of superhero that kids can get behind. But the thing is, few superhero movies would really get anywhere if the hero did not take the villain seriously. A great example of this was when they set up the feud in the first week, where Bray had a whole news anchor bit that was funny and still strangely menacing...and they simply had Bill shut it down. The week after they had to get Hogan to put over the match because Bill wasn't there! But it was the final go-home week that was the most egregious where the Fiend appeared behind Goldberg, only for Bill to totally no-sell it (actually saying "I know you're there"), spear the Fiend and then send him packing.

From all reports, Goldberg did not want to look weak against the Fiend. And the fact of the matter is that it points to a strange acknowledgment of the thinness of his character. Other part-timers would have little problem looking vulnerable against an enemy like the Fiend because...well, look at him! Goldberg on the other hand, could not see a world where his character would be sustainable, let alone more interesting if he actually sold the Fiend as dangerous.

So, we had a champion who the challenger wasn't willing to take seriously and a challenger whose work rate and respect from the IWC was...questionable at best.

I'm not going to talk much about the match, only to say that after a PPV (sorry, Premium Live Event) where the Undertaker won a trophy match he wasn't part of only to leave the trophy behind and Ricochet had his 2 week push essentially not only buried but cremated by Brock, it was probably idiotic of anyone to expect much (credit must go to Bray though for swallowing a huge chunk of pride and acting professional). Poor Bray only had the chance to put on two mandible claw attempts- that was it while having to cop 4 spears in quick succession and a very dicey looking Jackhammer. Cue fireworks and new Universal Champion.

It would be safe to say that the reaction was not one that WWE wanted, with a lot of the fanbase outraged by the fact that the guy they had invested so much interest was cast aside by the Ghost of Christmas Past. EC3 went so far to say in an interview with Wrestling Inc. that it was the day he stopped loving wrestling.

Imagine if you had just bought a nice cottage and then some contractor convinces you that you needed to renovate a bathroom. While they build it though they hit a sewer pipe and cause some damage to the house. Still, for a few months the house seems ok and you are getting used to the new bathroom when all of a sudden the contractor comes back and says actually he realises that needs to rip it out because it isn't up to code and now leaves you with a damaged house.

Welcome to Bray's world, where his investment and time was essentially gazumped by a man who just saw him as a fad, and was willing to throw that fad away when he thought the on-trend 53 year old who hadn't changed his schtick in 20+ years came along.

And that's part one of article 95. Because in part 2 we're going to do something that I've wanted to do for a while and now I've got an excuse.

We're going to rebook the Fiend. And not just this omnishambles. The whole thing. SummerSlam 2019-Mania 2021.