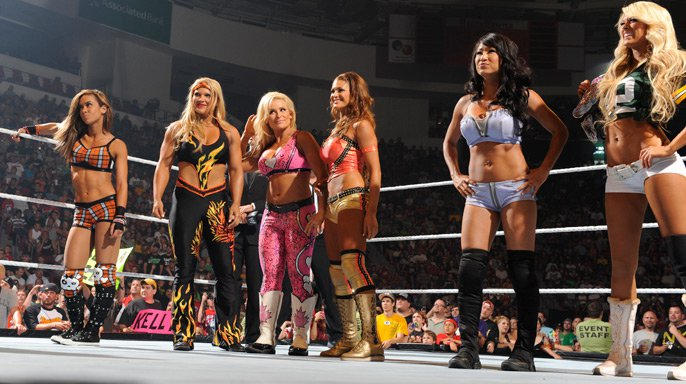 Even though the WWE is in the midst of its Women's Evolution, as people would like to call it, there has been an increased focus on women's wrestling in the WWE ever since Triple H took over for Vince McMahon this past July as all-male match cards are all but a relic of a bygone era.

The problem with the WWE Women's Division is that they don't draw ratings or tickets as opposed to their male counterparts. While the likes of Roman Reigns, Seth Rollins, Brock Lesnar and to a lesser extent, Matt Riddle, Bobby Lashley, Austin Theory, the Usos and Kevin Owens have become bonafide stars, the same cannot be said for the likes of Becky Lynch and Asuka.

One of the main reasons in my opinion as why most of the women don't draw is the fact that they didn't fit the mold that the likes of Trish Stratus, Sable, Torrie Wilson or Kelly Kelly as these four women were very popular with the fans despite not being very talented in the ring (except for Stratus). These four women were very marketable, they had the it factor and of course, the look. And to make matters worse, the women are taking about 50% of the TV time while the likes of Cedric Alexander and Drew Gulak are spending their time backstage doing basically nothing (it's even worse on NXT where it's not unusual for some episodes to have as many as four women's matches).

Even though the fans have complained about the lack of women's matches on AEW programming, Tony Khan knows that women's matches tend to draw low ratings. As a result, shows such as AEW Dynamite and AEW Rampage actually draw big ratings.

My suggestion: give the women only one match or segment on every episode of RAW, SmackDown, NXT or the PLEs. That way, these shows can draw bigger ratings, not smaller like women's soccer, the WNBA, women's college sports or women's tennis.