That was one hell of a curse...

I've been watching the Last Ride and one thing that strikes my mind time and time again is how lucky the WWE were to find the Undertaker. Not just for his wrestling ability, but his ability to keep putting a good face onto an industry that other leading lights did quite a bit to shit on.

With that in mind, let's get to this guy: 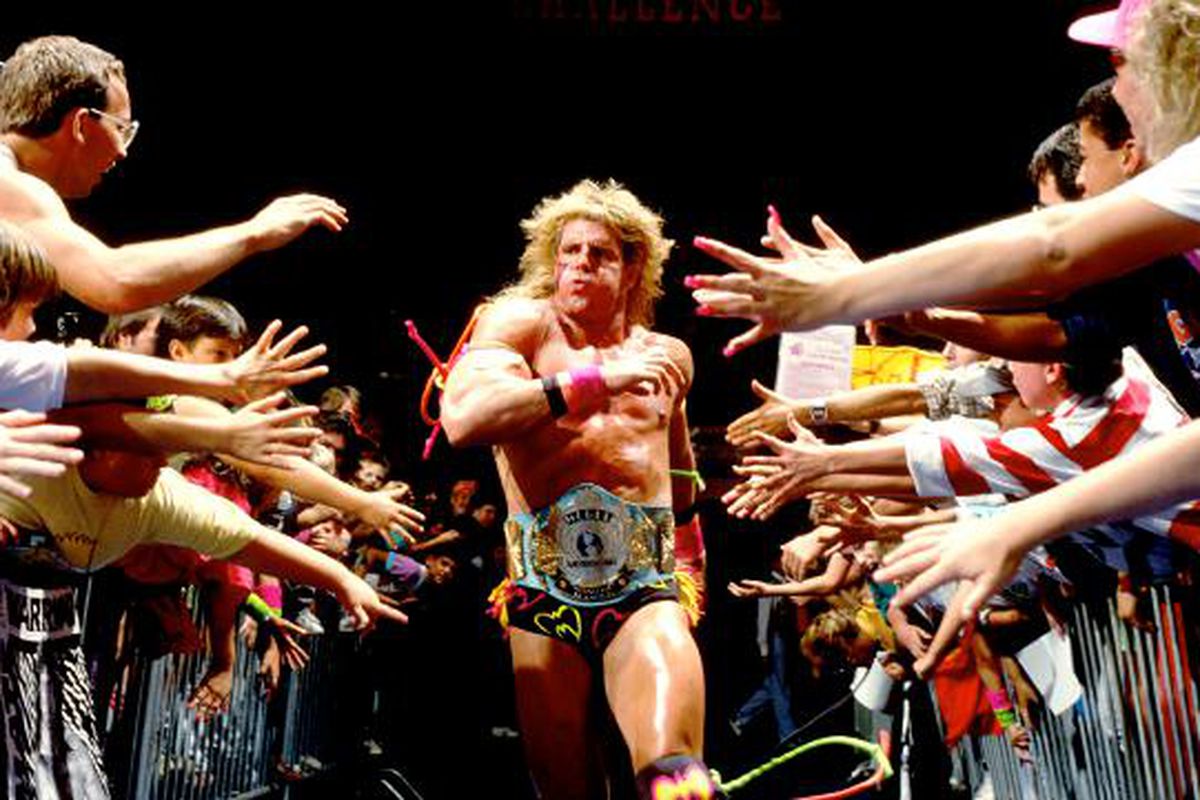 Few WWE superstars have been smashed over the way the Ultimate Warrior was in his first WWE run. While Hulkamania was beginning to cough and splutter, Vince was looking for his replacement and set his eyes on the Warrior. At WrestleMania VI, he put his plan into action by having Ho Kogan take the three second tan to Warrior and usher in the next man to build the company around.

Unfortunately, Warrior was not the savior that Vince had hoped and in the Royal Rumble 1991 he dropped the title to Sergeant Slaughter after interference from Randy Savage, to who he retired at WrestleMania VII. He then began to move into a SummerSlam feud, teaming up with Ho Kogan against Sergeant Slaughter, Colonel Mustafa and General Adnan. However during the build up to SummerSlam, a pay dispute between Warrior and McMahon culminated in Warrior threatening to no-show the PPV, forcing Vince to pay him $550,000. Vince showed his appreciation for Warrior's behaviour by firing him the day after SummerSlam and essentially told him that attempting to strongarm him was "a big mistake".

Jump forward a few months later however, and it became clear the complexion of the equation had changed. After WrestleMania VIII, Hogan was going to take a sabbatical from the WWE and Vince began to worry about a roster that perhaps wasn't as deep as he would have liked. So at the main event of said PPV, just after Papa Shango ambled down to the ring, the explosive rock hit and Warrior came down to give a helping hand to Mr Hogan and signalling a glorious return- PPV extortion be damned!!!!

So what made this return turn into a fart in an elevator? Usually there are a few factors that one can point to that create these cockamamie clusterfucks. However, in this case, the issues mostly can be drawn back to one chemical concoction.

Yes, steroids were hovering over WWE at the time like a dark pharmaceutically enhanced cloud. This was the reason that Hogan had to step aside being the face of the WWE, as the scandal was getting too close for comfort to him (and by proxy, to Vince). Ironically, however the guy he main evented WrestleMania VIII with needed to get an exemption to wrestle Hogan on the show of shows. Yes, Sid Justice had tested positive for steroids and after the match with Hogan was suspended and soon left [Editor's note: Sid denied the report from Wrestling Observer of a failed drug test]. 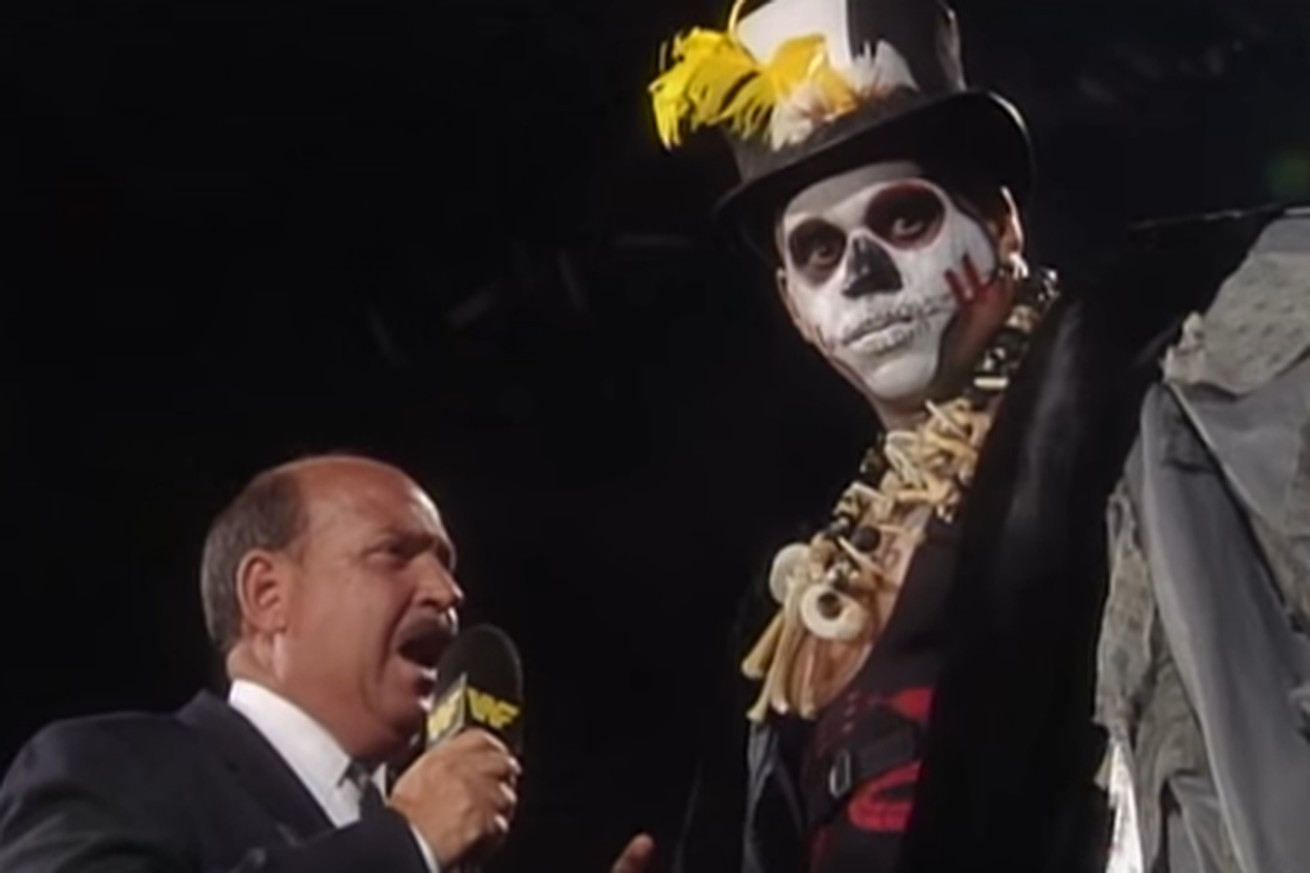 One of the things you have to remember about the WWE at the time was that you were essentially looking at a 4 PPV year (Rumble, 'Mania, SummerSlam, Survivor Series). As a result it was a massive (by these days) 4 MONTHS til Warrior would be wrestling at a PPV. So a feud with Justice made some sense to get Warrior feeling like a big deal again and also maybe pay it off at a SummerSlam match.

But while Justice was main event material, Shango was not. He had always be a colourful midcarder that Vince had used as a way to make his shows seem more characterful. More to the point, while Shango could work, he was hardly Rick Rude. Furthermore, since Warrior had just come back, you could hardly have Shango squash him like a bug two weeks after 'Mania- it would make all of Warrior's momentum come to a grinding halt. So instead, WWE decided to invest in smoke and mirrors by having Shango place a curse on the Warrior on the May 9th episode of Superstars to try and add a little spice to two figures who they were afraid (rightly) couldn't go in the ring.

And so the next week on Superstars, when Warrior was fighting officially Brian Knobbs of the Nasty Boys (unofficially it was one of those early 90s let's-get-a-midcard-tag-team to swarm our babyface hero match), Knobbs managed to rip off a wristband from the Warrior, which piqued Shango's interest, coming out and grabbing the wristband as the match proceeded before returning to the back, However it is the end of the match that business, as JR would say, begins to pick up.

As Warrior salutes the crowd, Papa Shango comes out with a smoking skull (yes, Austin wasn't the first) and goes into a sort of weird voodoo trance before suddenly Warrior clutches his stomach in pain. Aids come out to help him and try to help Warrior to the back but apparently security didn't seem to care that the massive guy with the smoking skull was uttering strange occultisms at the guy (fortunately the aids were there to tell Shango to "get away from him" as he loomed over everyone like a photo-bomber of a particularly weird selfie). When the get the Warrior to the back, things get loopier as he throws up green liquid to the hilarious Vince call "this is unfortunate" before standing up for Warrior by claiming that even President Bush had thrown up occasionally. So, what started off as a potential curse and incredible agony for the Warrior the segment before had now turned into a faux pas on the Warrior's part. At least if you're going to do screwy, stay screwy. It's like if the Undertaker had summoned a lightning bolt and JBL on commentary said "Well the electrician's at the stadium are certainly not earning their keep..."

The next week (May 23rd) on Superstars, Mean Gene interviewed Warrior who was going through the usual Warrior, erm 'promo' ("ANY WEAKNESS IN MY PHYSICAL CONDITION HAS ALREADY BEEN TURNED INTO A GREATER STRENGTH!!!!") when suddenly a liquid substance starts leaking from his hairline. As ridiculous as this sounds, it is actually a pretty cool image- like a sort of wrestling Black Spot from PotC2...totally undermined when Shango two weeks later Shango did the same thing to Mean Gene...only because of Gene's shall we say follicle impairment it came out of his sleeve.

Look, I know its Superstars so I shouldn't expect a lot but there's an idea here if you don't overload it. You know both guys can't go that well in the ring so have Shango play mind games (this is before they perfected the mind game characters with Undertaker and Bray) with Warrior and the black liquid can be used as to signal marked men. That's...kinda cool. But all this dissipates when you then have Shango set jobbers on fire, because then the question becomes "why not just do that to the Warrior?"

This was compounded by the fact that soon they had Warrior tag with the Undertaker against Shango and the Beserker (a kind of broad Norse warrior gimmick?) which unfortunately did more to accentuate Warrior's shortcomings. I mean, even at the time you have a guy whose move set was more extensive, who was more in tune with his gimmick (I mean, one guy had to have the mannerisms of a undead zombie while the other...jogged on the spot to hulk up?) and perhaps most importantly not only had capacity to give his opponents something but also was far safer. This is summed up by a moment at the beginning of one of their matches where Taker and Warrior give their opponents clotheslines over the rope. Taker's looks text book and safe, while Warrior's...seems to get his opponent in all sorts of trouble because he goes in too fast and too low (he actually has to raise the arm almost as he's making contact).

What was more intriguing about all this, however, was that this was supposedly to cook Warrior up for a big SummerSlam match with WWE Champion Randy Savage, where the Warrior was going to turn heel (?), possibly allying with Ric Flair and/or Mr Perfect. However, Warrior put the ixnay on the idea, believing that it would lower his marketing potential. While it is very debatable how good a heel Warrior would have made (though he may have been enhanced with Flair as a manager or something), there is no doubt that the WWE had dearth of top level heels. But it also highlighted a bigger problem with the Warrior.

See, the thing is that characters like the Warrior and Goldberg don't go anywhere. This is fine when they are on top of the food chain, but when they eventually settle down to be part of the card...their gimmick has a sort of arrested development feel. Furthermore, because their gimmicks are so shallow, it often excuses them when they feel this gimmick is being compromised by taking a loss (*cough* Crown Jewel *cough*). And so when Warrior was pushed down the midcard to fight Nailz, he decided to leave. Or did he?

No one can ever say that the Warrior didn't look, erm, 'pharmaceutically enhanced' and with the steroid scandal continuing to swirl, there was rumours that the WWE medical staff simply took Vince aside and said something along the lines of "Look, we're trying to go out there with a straight face and say there's no evidence of anabolic steroid use in the WWE and that (*pointing at Warrior growling while warming up for a promo*) is not helping". Whatever the reason, the Warrior was gone by November 1992.

The 1992 run of the Warrior was a whole lot of noise that signified nothing. More importantly though, the run showed the limitations of monster babyfaces if they were unwilling to change. In the old days, this could be placated by the fact that there was territories for the worker to move between so that when he was in danger of becoming stale in one you could move them on, but in 1992, particularly for a worker who wasn't the strongest anyway, there's only so far you can go because to actually look human would be to shatter the gimmick and the worker underneath. Why else would you do voodoo with Papa Shango?

And that's article 88! Remember I am still taking ideas for the articles on the way to 100 (I'd like some articles outside WWE in particular if you have any suggestions). The first of these? It drops next time! See you then!