Where I essentially look like the protagonist from Munch's the Scream...

This is a strange HSDoW article in a way, as when I write it down I feel myself relegating the guy on the title to the role of supporting character rather than main instigator/victim. And while there are other articles I've written in the past that have made/compelled me to focus on how the tomfoolery has derailed others, this seems different.

So, Jinder was still champion but the Indian tour he was essentially booked as champion for was not until the end of the year. This gap posed WWE with a problem. You needed someone to (hopefully) create a compelling feud for the WWE Championship for "the biggest party of the summer" but at the same time realise the fact that they were essentially fed to a worker to a) wasn't a great champion apart from the whole 'synergy' notion and b) was not going to be a champ that probably would not have been great to be associated with.

So who to choose? A couple of the ideal choices were kinda busy. Orton had of course just had a feud with Mahal so he was out and AJ Styles was busy feuding with Kevin Owens for the United States Title. So...who? Sami Zayn could have been a good choice but I'm guessing that since Sami was kinda used as an interim wrestler for Mahal during the Orton feud it may have been problematic. Rusev had just been spanked by John Cena and the idea of him suddenly wrestling a guy who trashed the US...when that was his gimmick seemed slim. I guess that leaves Cena himself, but then you lose the Roman Reigns match at No Mercy and his chance to pass the torch. Also, the notion that Cena is going to lose to Mahal is...well, laughable.

I say all this not to excuse what they did, but to show the idiocy of this sort of booking. As I said in the previous article, an alternative to attempting to find would be doing what they did with JBL and throwing a lot of novelty and different opponents into the mix. I am assuming that gimmick matches like Ladder and Tables were out because if he got an injury it'd kinda screw up the whole India outreach thing. But that doesn't mean you couldn't throw a Fatal 4-Way into the mix or even call up a rising NXT star or a Raw star to tangle with him on a PPV or two. In other words, do something for Christ's sake to help this guy from drowning into inanity. And, perhaps more importantly, don't drag anyone down with him.

I say all this because who they chose makes me SOOOOOOO MAD. 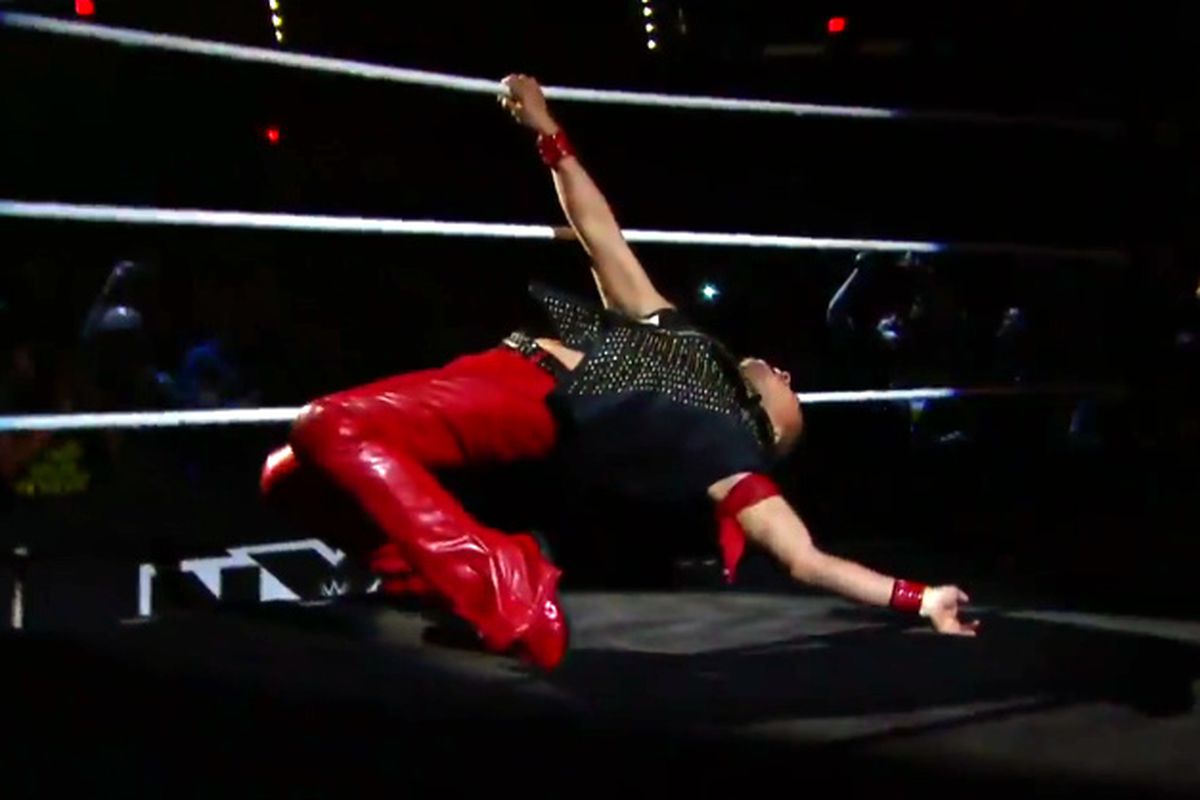 Look, I know that the twilight is coming onto Swagsuke's career and he sees WWE as the reward for a huge amount of toil in NJPW and so he's not going to bend over backwards to earn the massive paychecks. But that's fine. In fact, I wish more workers would learn when to slip into fifth gear and when to put on the old cruise control (see Rollins, Seth or Banks, Sasha). And you only need to look at the reaction that Nak got when he first got to NXT or to SmackDown to realise what a potential asset this guy was to this company who was straining for an uber cool babyface that wasn't shoved down people's throats (see Reigns, Roman), tossed about in a myriad of indecision (see Ambrose, Dean) or not really a babyface despite how much Vince prayed on his widdle beddie (see Orton, Randy).

He was unique, he was exotic, he had charisma to burn and despite the fact that he was (and still is) winding down, he is a consistently good worker who when the motivation is there can be sooooo good (ask Sami Zayn). And yes, he could have sold in a new market (a wrestling market too- just so you know!). So naturally, this guy- this potential money spinner and top merch seller- was the guy THEY FUCKING FED TO JINDER!

"But wait, Vectron!" I hear you cry, "He defeated John Cena clean on the 1st August to contend with Jinder at SummerSlam!" Yes, but this leads to a seed of cognitive dissonance that soon becomes a massive thicket. Because the guy who could beat a 16-time World Champion would not be able to beat Mahal, despite Orton beating him clean on the 8th August and Cena saving his champion by making Baron Corbin look like a rube.

At the same time, on the WWE decided the best way to get heat onto Jinder was to...have him celebrate the Independence Day of India. Y'know, the one that Mohandas K. (otherwise known as 'Mahatma') Gandhi fought for and that Martin Luther King would draw inspiration from to demolish segregation. That one.

The horribly cynical part in me wonders if this was a clip that they wanted to edit to India as part of their PR surge. But to do that, of course, you have to shoehorn a feud around it while keeping Jinder as the heel. And sure, the crowd boos, but how does this position the feud?

But what was worse was Nakamura lost in the same way that Randy Orton lost twice. In that, Shinsuke dominated Mahal until he was distracted by his lackeys and Mahal sneaks behind and hits a Khallas.

Look, I understand that heels have to sometimes resort to underhand tactics. That's fine. But why can't we have faces who learn? Who actually scout their opponents and look for patterns? Or is it that your supposed top champion can only wrestle the same match time and time again?

See, the thing is we're not talking about an established star like Orton anymore, where this sort of stupidity won't really damage his reputation. We're now talking about a rising star, who has oodles of charisma but needs cementing in fans' minds. Furthermore and this is what really annoys me- is that Swagsuke's best asset is that he's so...unique. You see him in his first match against Sami Zayn at Takeover and you can't help but think that this is someone fresh and cool. You see him falling for the same trick that Randy Orton did twice and any gloss of freshness rapidly comes off him.

But a more pressing concern was the fact that the feud has essentially gone ice cold as Jinder wasn't retaining any heat and the matches he was having stunk- even against accomplished guys like Orton and Nakamura. So the WWE was left with a conundrum of how to heat it up again,

Why with some good old fashioned racism of course.

And so on September 12th and 19th, Jinder Mahal went out and made fun of Shinsuke's 'faces' and labelling him with such choice words as "Mr Miyagi" and claiming that people think the Japanese eat cats as well as other witticisms that the Singh brothers laughed at sycophantically.

Look, I can understand that someone in that creative team, (I'm guessing someone who's approx 70+ years old and is quite high up) thinks that such racist epithets are a great way to draw heat on your heel champion. But they also are lazy and counterproductive. Fans of my series will know that one of the reasons I think the post-WrestleMania 19 reign of Triple H was so meh was because Hunter was booked into a corner. Once you plumb the very murky and icky depths of racism...where do you go as a champion? And how do you retain heat in.a way that doesn't offend/exhaust the audience?

Simply put, as soon as Jinder started uttering those awful things, Shinsuke had to win. Because otherwise the racist does. And your story becomes morally and creatively bankrupt. Because there is nowhere for Jinder to go. I mean, for God's sake the guy was already floundering trying to be a babyface in one country and a heel everywhere else and then you decided to try and pile on a bunch of bigoted remarks to add some spice? By doing that you have raised the stakes for both men in a way that if you book the wrong result both men will exponentially suffer. Shin will be the guy who couldn't get it done even when his honour was at stake and why should anyone care about Mahal?

And the sad thing was that WWE still doubled down! And this time Shinsuke couldn't get the job done even though the Singh Brothers were ejected from ringside. In their zeal to come up with some sort of new wrinkle they turned Jinder into a drooling racist and then made sure he was punished by winning cleaner than he did against Randy Orton!!! How does this make Shin look at all compelling? And the match still sucked because Jinder, during his time as champion, was either told NOT to get injured lest their Indian plans be derailed, or just didn't learn any new moves or transitions.

IN SEVEN FUCKING MONTHS AS CHAMPION.

And I know I may seem like I am harping on about this but this feud poisoned Nakamura's good will as far as I am concerned. He came in on fire the SmackDown after Mania and if there was any justice in the world he should have been pencilled in as WWE Champion at SummerSlam. Instead all of the momentum that was behind him was sucked out as he was fed to Jinder Mahal.

It was only when Vince suddenly awoke from whatever fever dream he was in that he realised that he needed to get the title off Jinder sharpish or face a Survivor Series where one of the main events would be Brock Lesnar vs Jinder Mahal- where SmackDown's representative as top champion to face the Beast in one of his 5 or 6 matches per year would be a guy who arguably had fewer moves than Brock did. So he lost it quickly to AJ in Manchester on SmackDown on one of those title changes that screams 'afterthought'.

But in a way that's how this whole sorry reign should have ended. Because in true Vince McMahon style, a hot Japanese wrestler was treated as essentially an afterthought. And rather than protect what was unique and awesome about him, they essentially tried to use it to invest in a far less charismatic or interesting guy. And it only amplifies the fact that Vince is not willing to get outside his comfort zone to push stars like Nak and Kairi Sane- stars that might be less typical than he's used to but could reap huge rewards should the time be invested in them. And by doing that you acknowledge the voice of your most knowledgeable fans, rather than make a transparent marketing ploy out of one of your top titles.

Because Shinsuke is now the only person who has won a Rumble but not won a World Championship in the past 30 years. And this is one of the major reasons why.

And that's the third and final part of my Jinder series! Next time, it's a pretty obvious choice for the HSDoW series. One could almost call it...a slam dunk.