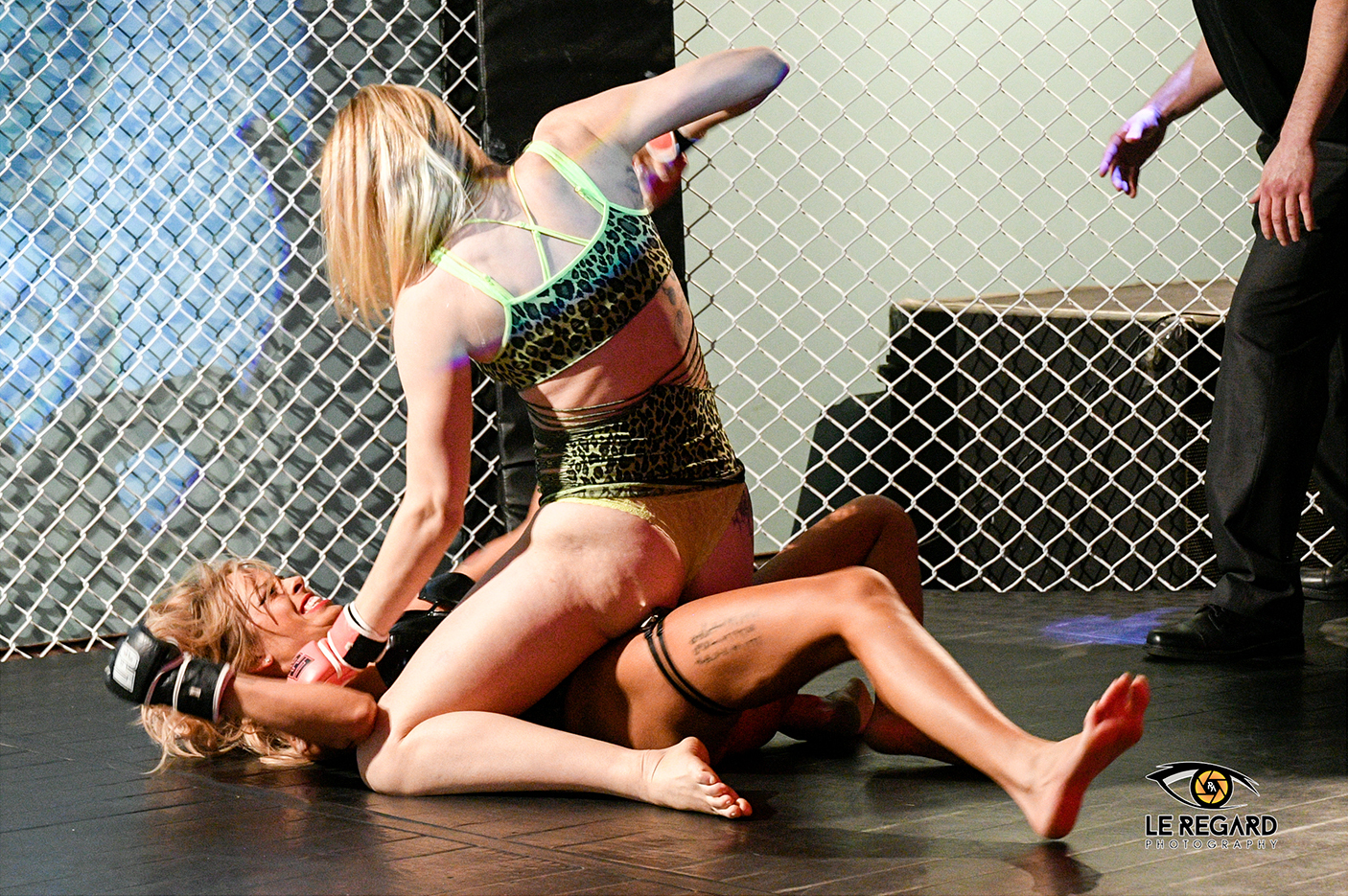 Ever wanted to see two women in lingerie throw down inside an MMA cage? Well you've come to the right place! Welcome to my review of LFC26: Booty Camp, currently available on DVD and VOD at LingerieFC.com.

This show was livestreamed (for free!) on YouTube about a month before it was available for purchase. This is the first time LFC has done a broadcast like this (normally the shows are filmed and edited in advance, and THEN broadcast on PPV.) As such, there were bound to be a few "growing pains" in the livestream department. But overall it was a fun show, and I'm very glad I tuned in, if only for the novelty of watching LFC live.

First off, though, we must address the elephant in the room. The actual livestream of this event was, well, it wasn't the best. A single camera (when we could SEE others being used!) that consistently missed entrances, introductions, and even parts of the action. At one point, the feed itself cut out, with a large "MISSING MEMORY CARD" or some such flashing on screen for a good 30 seconds or so, before the stream resumed. In short, there's room for improvement on the livestream front. Here's hoping the next show has a smoother time on the production side of things. The perils of live broadcast, I suppose.

The good news, however, is that the DVD/VOD version, which I am reviewing here (and the version available for purchase), is a MUCH slicker production. Gone is the single camera angle, instead switching between a few different cameras as needed. Also (mercifully!) gone is the picture-in-picture of our announce team, which in addition to being distracting, actually blocked some of the action from time to time. Before and after a given match is ok, but commentators should really be heard and not seen during the match itself. I was glad to see this gone in the DVD/VOD release. Please keep it off of future livestreams, if possible.

Don't take this to mean that the show itself was bad, however. Far from it, actually. The fights were intense, the atmosphere was great, and the crowd seemed to really enjoy themselves. I won't lie, I was extremely jealous that I wasn’t able to see this one in-person.

The venue for this event was The Nerd bar in Las Vegas, a pop culture Mecca perfect for this sort of thing. Previous LFC shows have been at larger venues, but the turnout was about the same, resulting in some lonely-looking wide shots. Here, the smaller crowd being packed into a smaller space made for a much more intimate and invested audience. (The free admission probably also helped with that.) I got a real "indie show" vibe from this event, and I loved it.

LFC President Maxine "The Boss" Frost (1-2) was not in attendance for this show. In her stead, "Acting President" Holly "The Lotus" Mei (16-5) oversaw the event. It wasn't clear if this was a simple scheduling conflict or if Frost intends to step down as LFC President, especially since Frost reneged on a bet with Coach Joel Kane to do exactly that following her loss at LFC23.

Interestingly, Coach Kane was also was nowhere to be found during this event, with Jessie "El Toro" Santos (10-4) captaining/cornering the Pink Team throughout. The commentators speculated on whether this was merely a coincidence or if Frost and Kane were up to something. Theories ranged from dual restraining orders keeping them both out of the building, to the brief (though not dismissed!) idea that they were having an affair! We may never know for sure.

[UPDATE: It was later confirmed that Frost has indeed stepped down as president, though she will stay with the league as a fighter. Holly Mei will serve as interim president until a replacement can be found.]

Also in attendance were the undefeated Cali Cat (4-0), and former Olympian Andreea "The Storm" Vladoi (12-4-1), who nearly got into an unsanctioned fight of her own with longtime rival (and LFC European Champion) Jolene "The Valkyrie" Hexx (19-5-1), though it MUST be noted that Hexx was the one to throw the first punch. This rivalry is FAR from over, it seems.

Wrestling fans may also recognize Shelly "Aphrodite" DaSilva (9-7) from her time in ECW as Ariel, or in TNA/Impact as Salinas.

Finally, a rather special guest judge for the bouts was Mr. A-Double himself, former WWE and Impact Wrestling World Champion Austin Aries! Quite the surprise seeing him at the judge's table, and I'm a little curious why LFC didn't play up his appearance in the promotional run-up to the event. We didn't even get a shot of him during the broadcast until nearly halfway through the show! It does make me excited for who they might get next, though. (Kevin Kross is based in Las Vegas, has an MMA background, and is dating "The Smokeshow" Scarlett Bordeaux. Just saying.)

The LFC also elected to have "Ring Guys" at this show, a departure from the scantily-clad ring girls that traditionally hold up the signs between rounds. Think "banana hammocks," here, people. It was a unique idea, to be sure, but the livestream chat was definitely NOT into it, and the live audience (and Aries) didn't really seem to be, either. Not all experiments work out, I guess. I'd advise sticking with ring girls for the next show.

Moving on to the event itself, it was a fairly impressive card. Each match on the undercard featured a 0-0 newcomer facing off against an established LFC fighter. In retrospect, the results were pretty much exactly what you'd expect given that setup: a valiant but, with one notable exception, losing effort by the new girls. Welcome to the cage, ladies.

I'll be delving into each individual fight in a separate article, so let me just say that overall the matches were solid. The LFC really delivered on its tagline of "A little bit of MMA, a little bit of wrestling, and a little bit of clothing." The bouts featured everything from armbars and rear naked chokes, to airplane spins and flying headscissors, to bustiers, thongs, and even a wardrobe malfunction or two! GLOW and Invicta FC this AIN’T, folks.

Don’t let the "L" in LFC fool you, however. This is the Lingerie FIGHTING Championships, and these girls can FIGHT. I certainly wouldn’t want to face any of them in the cage. They’ve all clearly had some training (some in multiple styles/disciplines), and the action was fast and frantic.

Overall, I would give this event a solid B+. Definitely worth watching if you like sexy women and MMA (and who doesn’t?) Only a few production snags kept it from being truly great. If they can fix the livestreaming issues, drop the Ring Guys, and maybe hype up the guest judges a bit more, we'd be in definite "A" territory. But as the first show under this new format, I was very satisfied with the event and I look forward to the next one. Keep it up, LFC!