Prologue: After finishing up the last one, I spent quite a bit of time searching around for a way to access Bruno Sammartino's autobiography for free with no success. I'll have to order that one and put it on the schedule for later. Subsequently, I'm still working on poll winner, Crazy is My Superpower, but I found Nino Wrestles the World while working on a book display for Cinco de Mayo, and it was amazing. 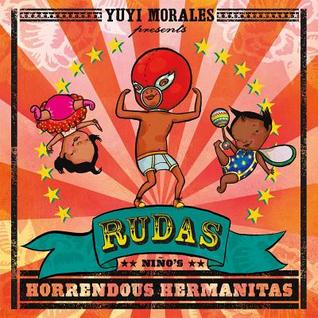 The Build: Yuyi Morales is an artist from Xalapa, Mexico. She started illustrating picture books in 2003 and won a Caldecott Honor for Viva Frida in 2015. She got her start illustrating other people’s texts, but she has written several books as well, including this one. Most of her books highlight some aspect of Mexican culture with this being the first one that focuses on wrestling and specifically lucha libre. It appears to have been successful enough she created a follow up, Rudas: Niño's Horrendous Hermanitas.

The Main Event: The story opens by showing a boy playing with toys and a wrestling mask on the floor. The boy puts on the mask and is transformed into Nino! As a luchador, he takes on a variety of supernatural opponents, subduing them all with children's moves like tickling or foreign objects like puzzles and popsicles.

He is (GLORIOUS until) victorious against all comers until the clock strikes fear in his heart as he knows his siblings’ nap time is over. He is succumbed in a handicap match by his diaper-clad twin sisters before giving in and joining them to form a trios team and face new challengers.

The main text is in English, but all the character names and emphasis words are in Spanish. I initially thought this was because the book was originally published in Spanish and translated, but it appears this hybrid text is the original.

The plain backgrounds keep the attention on Nino and his opponents, who are all stylized and interesting. The front and back covers also include depictions of each character in a baseball card/sports program way listing some general information and their lucha style. There is also an informational paragraph about lucha libre at the end of the book.

This is spectacular. The depiction of this kid pretending to wrestle different characters from his imagination really resonated with me, making me remember the "epic" matches I had with my stuffed animals as a kid.

I read this to my son who is almost 4, and he also really liked it. He wanted to read it again immediately. His first reaction was that it was funny seeing the boy in his lucha mask and underwear, but by the end he was calling Nino a superhero.

I would recommend this to anyone who has young children who are or they hope will become wrestling fans as well as any adult who looks back on their childhood fandom with nostalgia. So probably just about everyone on this site.

Epilogue: As I said, I'm still working on AJ Lee’s book, which I'll put up soon. I’ve also placed Conspiracy, the book about the Hogan/Gawker trial, on hold so that will be in the works. I’m several places back in line so I’ll probably put up a poll with the next one for something in between. Thanks, everyone.