The feud between Sasha Banks and Bayley is a hot topic at the moment, and it is for many reasons. Some people are awaiting a character change for the Bo$$ (or Bayley); some people just want a repeat of their classic from Brooklyn in 2015; and others are in outcry at the fact they (probably) won't go one-on-one at 'Mania. The story, when remembered correctly, is one of the most prolonged and epic tales in modern wrestling.

Ok that may be a stretch for some of you and I can understand that, I'm just a big fan of both women.

We all (hopefully) know their origin stories. Both consistently broadcast the fact that they were fans from a young age, this is all they ever wanted etc. Then, both "came up" through NXT together and slowly formed the Four Horsewomen with Charlotte Flair and Becky Lynch. They each had a series of stunning matches, and let's say the starting point of this fearsome foursome was that Fatal 4-Way match at NXT Takeover Rival. Sasha won, and picked off Charlotte and Becky in separate rivalries at the top of the card. This was Sasha's story.

Sasha, refusing to take Bayley seriously like many, turned a blind eye to what was coming up to meet her at the top of the mountain while she herself was fighting to maintain her place. Fast forward to Takeover Brooklyn and Respect, and both women became recognised for the absolute clinics they contested, not to mention the first female "co-main event" and main event for a WWE Special at Brooklyn and Respect. Takeover Respect became a fitting title in the first ever Women's Ironman match as the rivalry finally gained an undertone of esteem and regard between the two women. They had to respect each other, they were changing the game just like they dreamed. Bayley won the feud, and Sasha moved on. 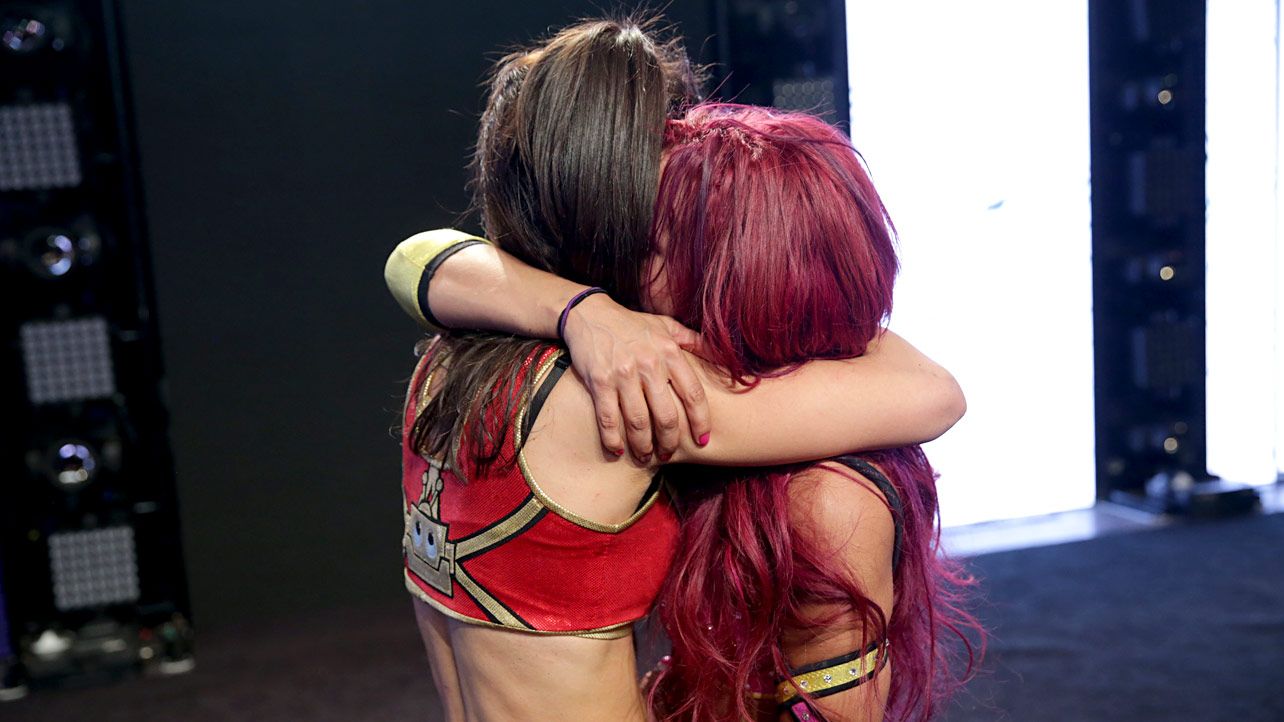 So Sasha moved on to the main roster and Bayley went on to be the leader of the NXT women's division. Fast forward to Battleground 2016, where Bayley and Sasha are reunited as friends. Sasha was mid-title hunt, but she had no need to worry. Bayley wasn't a threat here. She brought Bayley to help her equalise the numbers game because she knew how good she was. Sasha knew she was in control. She used her.

This stems from the fact that Sasha knew she could beat Charlotte one-on-one. She'd done it before, and she did it again the night following Battleground for the Women's title. The two engage in an epic rivalry for most of 2016 and Bayley is inserted somewhere in the middle, but she doesn't last in the title picture. Sasha ultimately fails to overcome Charlotte, and "doesn't feel like the Bo$$ anymore". The title, the bling she so desperately requires as part of her Boss character, is out of her grasp as long as Charlotte has it around her waist.

This is when the cogs start to turn for Banks. Bayley becomes the number one contender for a match at the 2017 Royal Rumble by knocking off Nia Jax with help from Sasha in the form of a distraction. Get the title on Bayley, then she can challenge for the title again. Easy. Sasha didn't care about Bayley - she was just a convenient means to an end.

Bayley fails to knock off Charlotte at the Royal Rumble, but beats her on RAW and becomes the champion soon after. This, unbeknownst to Bayley at the time, was due to help from Sasha interfering on her behalf. Again at Fastlane, Sasha got involved to take down Dana Brooke, providing a distraction that Bayley capitalised on. Bayley retained with help from Sasha. Bayley had the title, now Sasha needed to keep it on her. She knew she could exploit her friendship with Bayley to get that title back - after all, the Boss is who she is, and the Huggable One is who Bayley is.

On paper, this is perfect. Sasha showed flashes of this persona throughout Bayley's reign - once grabbing the title after a tag match and again on this cheeky instagram post. Finally, Banks gets her shot at her friend at Wrestlemania, However, it's not one on one. Thus, we don't see a complete turn from Banks - she might need her help in this match. Bayley retains and Sasha was involved in the match. See the pattern? Sasha was consistently close to the title while Bayley held it - both physically and mentally.

Sasha interrupts Bayley the night of the Superstar Shakeup and her tone changes as she tells Bayley the time for celebration is over. This is it. Wait, enter Alexa Bliss, who puts the entire ordeal on pause as Bayley loses the title to the newcomer. Ironically, both title matches Bayley lost (at Royal Rumble & Payback) didn't involve Sasha in any shape or form. Both women then attempt to climb back up the card, with Sasha actually gaining the title back for another 8 day spurt. Throughout the next few months, Bayley and Sasha share awkward moments that often end in Sasha telling Bayley off in some form. 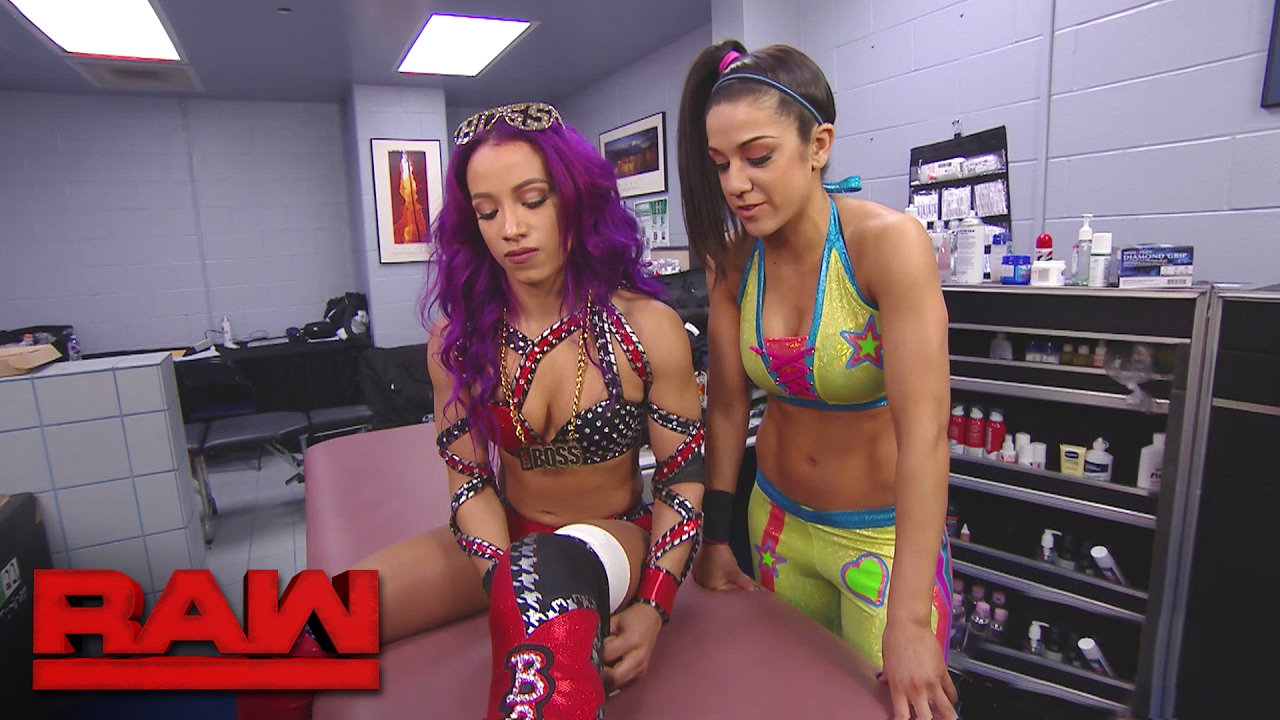 So here we are at Act III of this emotional rollercoaster. Sasha has been getting frustrated and so has Bayley. Neither of them could beat Asuka and end the streak. They're starting to get irritated by each others' presence, let alone those in the way of their goals. What started out as friendly competition and back-and-forths on social media has escalated into something far more personal.

Sasha unceremoniously dumped her "best friend" from the Rumble. She was in there long enough at that stage, she didn't need Bayley around anymore to win the match, showing flashes of her cocky Boss persona once again. She also got unnecessarily agressive towards Bayley in their match on February 12th 2018, and literally Mufasa'd her at Elimination Chamber. And Bayley was right - Sasha does these things because she knows, or she knew Bayley would still be around afterwards.

The cracks finally started to burst and as we saw on RAW this week, and the tipping point has been reached. They got physical with each other outside of the combat setting, so we have to wait and see where it goes from here. Bayley dropped that bombshell of a line about Sasha never retaining her title, but I hope WWE realises its own continuity it has going here and brings up the fact that Bayley has never retained (or won) when Sasha wasn't around.

This feud has been brewing on the main roster for over a year, and goes even further back to NXT. Sasha knew she couldn't beat Bayley as an enemy as shown in NXT, so she decided to exploit Bayley's good will and use it to her advantage.

This tale is layered beyond measure and it really is a fantastic piece of storytelling. It's chronicles a friendship predicated on the ego of one and the good spirit of another. I hope you all enjoyed this somewhat, and thank you for reading!