Because we gotta tie up some time until the future Godfather can make his way to the ring...

Ok, this one takes a bit of setting up so bear with me.

In August of 1991, Ric Flair was fired from WCW after Jim Herd made the genius decision to attempt to repackage him as a Roman soldier. After an acrimonious back and forth, Flair upped sticks and went to WWE with his title belt in tow, thus making Herd look like a complete fool and allowing VInce McMahon to test the waters of a massive Wrestlemania main event between Flair and Vince's franchise player in Hulk Hogan.

However, Hulkamania was not the force it once was. A few months later at Survivor Series Hulk Hogan ventured into a Championship match against the Undertaker...and was greeted with a 50/50 crowd. One tombstone onto a chair thanks to an interfering Flair later and the Phenom captured his first WWE Championship...Which lasted 6 days until Hogan managed to retrieve it using some shenanigans of his own.

This outright cheating by both men outraged WWE President Jack Tunney who declared the WWE Title vacant and declared a new winner would be crowned in the Royal Rumble Match.

While all this was going on, Sid Justice was getting over, despite his rather...sporadic television appearances because he was getting buzz on the house shows. Muscular, chiselled and with an undeniable ring presence, Sid seemed like a worker right out of Vince McMahon's main event wheelhouse. However, he tore a bicep in late 1991 and missed the Survivor Series PPV, seemingly calling a halt to his push.

However, fate, and bonkers creative, had other ideas.

Y'see the obvious idea, as we have discussed above would have been Flair vs Hogan for the Title. If Vince was still convinced that Hogan was the biggest babyface they had, then it made sense to pit him against the biggest heel in the whole of US Wrestling at the time for their biggest title. Add to that the fact that Hogan was taking a hiatus in order to avoid speculation about steroids burn out and it seemed like a great idea to put Flair over as a new heel champion until they could position a future babyface into the position of being put over by Flair.

There are many reasons why this wasn't actually done. Reasons included that their house shows didn't set the house on fire, the above steroid scandal, and the fact that Hogan didn't want to job to the Nature Boy. Ok, if we're going to look at this objectively point one means that they essentially substituted a Flair/Hogan main event because they thought Hogan and Sid would draw better. The second point implies that they were afraid of a steroid scandal and so therefore decided to substitute a main event with one known steroid user...with one with two steroid users (Sid even had to get an exemption after flunking a drug test, according to Dave Meltzer, to be in Wrestlemania 8). So that leaves with the idea that Hogan didn't like to job.

Look, I can understand if Hulk was going to be a royal prick about the whole thing, then it would be difficult to put him into the title picture (although they managed it the next year...). Furthermore, if he was going to take time off, you can't just give him the title (although again, next year...). However, what they did to alleviate this problem made close to NO sense.

The last 4 of the Royal Rumble were Ric Flair, Randy Savage, Sid Justice and Hulk Hogan. Sid, with an assist from Flair, threw out Savage and then proceeded to throw out Hogan while Hogan was attempting to throw out Flair. Now, this could have been seen as a heel act, only by 1992, people were so fed up with Hulk's schtick that Sid was cheered (it's hilarious seeing Hulk appealing to a crowd who is ecstatic to see him out of the friggin' thing). Sid simply shrugs his shoulders and says (rightly) "it's every man for himself". Hulk, then being the good loser that he is, essentially holds Sid by the arm over the rope so that Flair can sneak up and win the title. And we're supposed to believe that he was in the right? Sid didn't do anything wrong! Hulk, on the other hand, blatantly cheated.

This leads to a post-match confrontation between Sid and Hogan where refs (including a young Shane McMahon who seems to be focused on hiding his head behind Hogan's arse) endeavour to separate the two.

So, like last year, the Rumble gave us a champion but no contender. Essetially Jack Tunney believed it should come down to 5 men: Sid (last eliminated under controversial circumstances), Hogan (last champion), Undertaker (champion before than who lost the title under controversial circumstances), Roddy Piper (the IC champion who lasted 30 mins in the Rumble) and Randy Savage (who, um, was a former champion?). Tunney went with Hogan, outraging Sid who thought that as the last man eliminated he should have had the shot at Flair's title. In late Febraury, Sid managed to goad Hogan into a match by threatening his good friend Brutus "the Barber" Beefcake and destroying his barber chair, forcing Flair to face Randy Savage instead. Luckily Flair and Savage managed to burn the house down with a feud that was pure fire, incorporating the best aspects of Flair's sleaziness and underhand tactics with the romance between Savage and Miss Elizabeth. Add to that the title and their respective in work capabilities and it seemed like a slam dunk that they should main event.

Well, nobody told Vince that.

Look, I get that you are billing this as Hulk's last match. That's nice. But this is hardly Flair/HBK or HBK/Taker here. It's not even Taker/Reigns. Hogan was struggling to get the crowd to care and Sid, while getting over, was still new and was hardly a viable replacement for Hogan going forward. You know who could have been? Maybe the dude who carried the title with such aplomb between Wrestlemania IV and V despite the fact that Hulk Hoggin' couldn't get out of his fucking way. Or maybe a guy who was arguably the best damn heel in the whole of the North American continent. Why not give them the main stage to show what they could do?

And don't give me that bullshit about the double main event. Why was Hogan and Sid more prominent on the posters? So let's have a look at the real main event that had to follow a great IC Title match between Piper and Hart, and a very good WWE Title match between Flair and Savage. How did it go living up to that?

The match itself is about as thrilling as you'd expect from two guys whose repertoire of moves see to consist mostly of punches and the odd knee. It's made worse by the fact that both seem to indulge in the over-selling thing of staggering to the other side of the ring when their opponent hits them in the back, which of course just eats up time (particularly when Sid is on offence, as he seems to be out for a leisurely stroll rather than in the middle of a main event).

But if the majority of the match is dull, it livens up at the end...

As the crowd witnesses the typical Hogan comeback, he soon lined up Sid for the legdrop...and hit it. Then he went for the cover, with the crowd assuming that soon they'd hear the familiar tones of Real American-

Only Sid kicked out.

Now, if this was planned, you could imagine the commentary team screaming (after all, several people have kicked out of the Tombstone and announcers still lost their shit when Reigns did it). Instead the commentary and Hogan started gesticulating towards Sid's manager Harvey Wippleman who apparently caused the kick out by...climbing on the apron? Does he have some sort of telekinesis?

It soon become worse when Hulk grabbed Harvey and tossed him towards Sid...who caught him and put him down in possibly the best "Now What?" moment in the history of Wrestlemania.

Of course it soon became clear when a very sheepish Papa Shango emerged that something had truly gone awry, as Shango was supposed to interrupt the Hogan pin. So, having only been a couple of minutes tardy, Shango decided to help Sid gang up on Hogan. 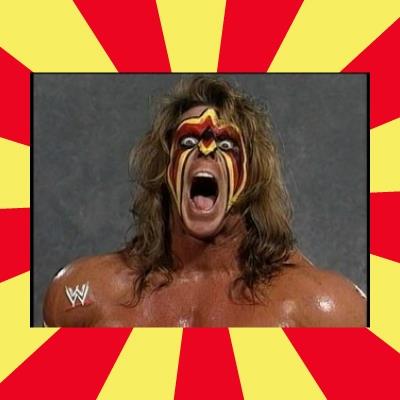 Yes, the Ultimate Warrior made his big return, to which Sid...completely no sold by ambling over to grab a chair...and ambling back to the ring seemingly UNAWARE of the massive return of a former WWE Champion. Cue a big beatdown of the heels by Hogan and Warrior and everyone goes away happy.

Oh, and the result? Hogan won by DQ (I think this was just an excuse for Vince to cue up Real American again...)

Now, you may dismay at the fact that the Undertaker did the job to Roman Reigns. But at least there is a conception of looking down the line with that booking. What in the blue blazes does this main event achieve? Sid loses in a nothing match (apparently), Shango looks like an idiot (a voodoo priest can control others through a curse, but obviously can't tell fucking time...) and an obvious tag team program to take you through the summer isn't going to happen because Hulk is not going to be there.

Meanwhile the WWE Title feud was going from strength to strength with two performers ready and willing to set the bar even higher. Wouldn't that be where you want to finish your show? With the title match and a interesting hook for the future.

This main event showed how reliant Vince had become on Hogan. For at the exact time when Vince should have been looking forward, beyond Hogan and his steroid scandals and his stale schtick, Vince couldn't tear himself away. So instead of getting a great main event, we got the Wrestlemania equivalent of Wacky Races.

And that's article 76! And next time it's an audience choice! Please pick a Championship Reign of any company you would wish for me to cover. I look forward to hear you vent!