Or what if you had a gimmick match and the gimmick didn't show?

Whatever you think of Mark Calaway, it has to be said that he hasn't had it easy. Over the years he's been lumped in the ring against a whole bunch of workers who Vince essentially thought looked menacing without much regard to their wrestling ability. And while the Undertaker did his best, fact of the matter is that not all surprised us like Braun Strowman. 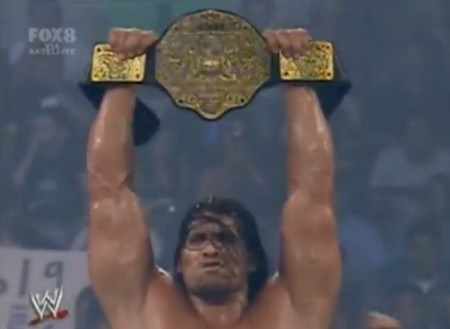 Dalip Singh Rana aka the Great Khali has never been seen as a great worker in any sense of the word by the great majority of the WWE Universe. Yet another variant of Vince's continuous fascination with foreign heels, Khali was about twenty-five years too late for wrestling. Had he been working in the days when the territories were still going strong, he could have moved from territory to territory as the big heel before anyone really found out his glaring weaknesses. In 2007 that ship had long sailed. However it didn't stop Vince from squaring him off against he guy who Vince had often turned to in order to get his new monsters over.

So on April 7th 2006, Khali made his debut with Davari alongside him and thanks to a wonderful selling job by Taker (why is it that so many big guys seem to sell fear better than a lot of little guys?) became seen immediately as a threat.

Of course, this was just a segment. Sooner or later he'd have to wrestle.

Shockingly the match between the Undertaker and the Great Khali at Judgment Day was not up there with Steamboat and Savage, with Khali showing little mobility and Undertaker trying desperately to tell some sort of story despite the fact that Khali was no-selling everything. And before people say that this is how Undertaker got started, yes that's true, but a) Undertaker had a cooler gimmick and a better understanding of the theatre of wrestling, even in 1990. b) it wasn't 1990 anymore anyway and c) Undertaker was able to vary his moves up a bit so that it looked like it hurt- the idea of a chop and a boot felling the Undertaker was just...weird.

Naturally the best idea would have been to gimmick their second encounter in a way that took away from Khali's limited moveset and allowed him to look like a monster but perhaps gave Taker the chance to grit out a win. Some thing like a No DQ match or even a Last Man Standing.

Of course what they did instead was totally bananas. 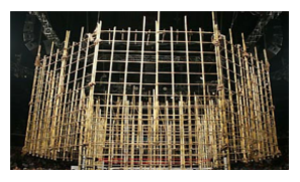 Leaving aside the cringeworthy racial stereotypes (this is 2007 remember?) there is so much that is just idiotic about this gimmick. Essentially this is a cross between a cage match, a Hell in a Cell match and a War Games match but manages to totally bypass all the cool stuff about all of them.

Most of this is due to the ludicrous rules, where the interior structure has 4 doors, with a ref at each door. When a competitor asks (that's right, asks) for the door to be raised the ref will oblige, where it will remain open for 60 seconds. The outer structure, on the other hand, has no doors whatsoever. However to win, both structures have to be escaped.

Now imagine Michael Cole telling the crowd these rules (which obviously hadn't really been broken to them before the match) and you can imagine why the crowd weren't exactly amped for this match. You have a match called the Punjabi Prison and the object is not to bash the crap out of the opponent, but just to get out?!

Well at least it sorta fitted in with the Great Khali, though I would be interested to know how the deeply religious Rana would have reacted when he heard the pitch that essentially Vince was going to make a prison out of bamboo. I mean, goodness knows India was a primitive place despite such inventions as the friggin' base 10 numerical system as well as the game Snakes and Ladders, which some people on the WWE roster must feel they are playing (in Cesaro's case, there seems to be a whole lot more snakes).

Such racial insensitivity was not helped by the fact that the prison was lowered down to the ring with some of the most vague Indian/Pan Arabic sounding muzak I have heard. Which was particularly ironic given the fact that Khali wasn't even cleared to wrestle.

Well at least we can shelve this you might say and-

To be fair to WWE, it was a last minute thing and there was no doubt that the structure probably cost them a mint (and they probably thought that the crowd wanted to see a Punjabi Prison match). Soooo,...who did they put in Khali's place?

The Big Show. Due to the fact that he attacked Undertaker backstage for...um...cause he doesn't like him? So Teddy booked Show in the prison instead. And that kinda doesn't solve the problem about why Khali isn't competing. After all, he laid down the challenge to Taker, and the kayfabe story you're now running with is that because the Big Show attacked Taker, the guy who wanted the match should step aside.

Which leads us into a situation where Big Show is coming down the ramp to the ring and JBL hilariously yells "He doesn't know anything about the Punjabi Prison!!" I reckon there's about 9750 people who could have said exactly the same thing...

Incidentally, there is no doubt that WWE are trying to sell on the brutality on the structure, but JBL overeggs it a tad, going so far to say "This [the Punjabi Prison] couldn't possibly exist!!", while the prison is actually in front of him. It shows the difference between a stipulation match having a heritage (Hell in a Cell) and trying to create one from nothing.

Part of the problem with the match is while the structure looks brutal, it actually doesn't lend itself to innovative spots. The inner structure is around the ring so you can't really throw people into it and because it's made of bamboo rather than mash you can't really grind anyone's face in it the way you can in a Cage, Cell or Chamber match. However, soon Undertaker creates some space, taking out Show's legs and begins to...climb the inner structure.

I suppose you could argue that he didn't want to open the door for Big Show, but it does look weird that Taker is ignoring the rule that Cole made a big song and dance about just before the match began. It makes Undertaker look more silly than anything else.

So they then get back into the centre- where there's a cool chokeslam-into-DDT counter which looks ok. But the thing is that the match continues to be very slow- occasionally broken up by the odd attempt to scarper out of one of the doors which reduces the match to an odd sort of tug of war. Eventually, however, both fight in the outside structure, when Undertaker gives Show a crossbody which busts the prison wide open and manages to take him clear of the structure (apparently).

Hilariously, Khali comes at the very end of the match to cause absolutely no interference (I actually think he was supposed to make Undertaker look desperate to escape but his cue was off and so he hadn't even got near the top of the outside cage when the match finished, making him look like a noob). It's made worse by the fact that Khali is at the opposite end of the cage to the ramp, so when they are taking shots of the Big Show gradually coming to after the 'hellacious' match, it makes Khali and Davari look like two guys who are trying to see a concert for free, rather than important figures.

All of this is not to say that the two competitors don't try their damnedest to make this match a spectacle. Both bust themselves open and take some pretty weird risks, including Undertaker doing a Tarzan like dropkick which actually looks pretty naff but could have gone oh-so-wrong, or Big Show taking a standing leg drop through a table.

And that leads me to the biggest problem with the match.

Looking back at it, I was surprised how much both competitors put their bodies on the line. However, rather than amazed me, it frustrated me because I don't think these risks were able to be appreciated by the crowd due to all the cartoony gimmickry going on around them. That Tarzan spot may have been risky, but it also looked faintly ridiculous in a 2006 wrestling match. Big Show could scream and cry all he wanted post-match to try and get the brutality of the match over, including bleeding from head wounds, but behind him was a structure that was as deeply Indian as Peter Sellers' character in the Party and looked faintly ridiculous compared to the Cell or the Chamber.

It is difficult to think that in any way a Undertaker/Khali Prison match would have been better. There is no doubt some things that Show did that Khali would have found very difficult due to his immobility. However, despite these two putting it all out there, it still felt like a match that was mediocre because the stip hampered them- as it would anyone. Indeed, JBL was right, it was unfair to put Big Show (and Undertaker too) in this sort of match. Not because it was brutal, but because there was nothing about it that lended itself to interesting wrestling. Instead, much of it looked like a bad stunt show.

And that is article 73! Next time it's blood and what happens when that pesky liquid won't go away! See you then!