Another nail in TNA's coffin...

Gimmickry is rife in professional wrestling, simply because not every feud can end up in a one on one match because the story requires something more. And though many of them are not technical masterpieces, it must be remembered that one of the few WWE matches to gain 5 stars was the first Hell in a Cell match between HBK and the Undertaker at Badd Blood in 1997.

But not all fancy stip matches can be winners. Just ask this guy: 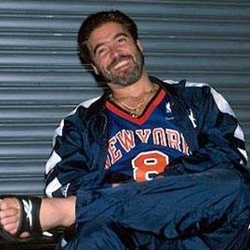 Vince Russo has had a remarkable career in professional wrestling writing. Much of it has been criticised, though if truth be told Russo has brought a lot of that upon himself. Few bookers or writers have claimed themselves to be as integral to the product as Russo has. While guys like Dutch Mantell and Jim Cornette will claim some credit for the things they have put together they will always take pains to acknowledge that the main job of a booker is to get the talent over. On the other hand, I would not be totally surprised, if he thought he could get away with it, if Russo opened every TNA show with 'A Vince Russo Event'.

Anyway, where were we? 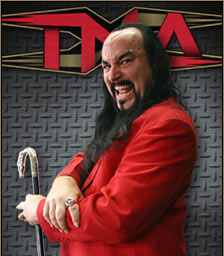 That guy is James Mitchell. He was Abyss' father (though we didn't know that yet) and somebody who had got in Abyss' ear, controlling his actions. Such was his influence over the big dude that Sting was worried, believing that the guy with the snake-headed cane, devil goatee and evil laugh wasn't perhaps the best influence for Abyss and was leading him astray.

Abyss, however, felt differently. And so the two of them duked it out in a Prison Yard Brawl which saw Mitchell incapacitated.

"Ah, you may think, now Sting can reason with him by...STRAPPING HIM TO A DEATH BED?!"

Apparently Sting believed that Abyss needed to die first in order to be a new man where he would be given a choice: choose life (not in the cool Trainspotting way, apparently...) or darkness. This was because Sting believed in him, apparently.

There's been a lot of talk over the years about how Sting and Undertaker are similar characters in many ways. And they are. However, there are some important differences. Sting has always been best when he's been, for want of a better term, a vigilante with the odd hint of the supernatural. The whole 1997 WCW run was great because he was a silent symbol of vengeance who with his baseball bat would beat the bejesus out of everyone. But when Sting tries to do a bigger embrace of the supernatural...it often comes off as hokey. Part of it is that Sting, while a dark babyface, is very much a babyface. Undertaker has NEVER been a babyface but instead has dwelled in the past 20 years or so as a sort of total loner that leans face. Part of it to is that Sting, doesn't have the voice to sell darkness and the unknown.

But the main reason this doesn't work is the fact that when I heard Sting continue to sermonise on the death bed in his promo the imagery I thought of...was Bray Wyatt trying to initiate someone into the family (admittedly with some awful Russo dialogue).

Because it doesn't feel like Sting's saving Abyss, but rather that he's brainwashing Abyss. Add to that all the talk of dying and being reborn; notions of eternity and the heavens; and being tempted by the devil and there's a strange religious vibe to this that is a little weird to see on a wrestling show. I don't have a problem with Sting saying that Mitchell is all wrong for Abyss. I do have a problem with this feud being the TNA equivalent of Sting knocking on Abyss' door and asking if he can drop off some pamphlets.

And again, I just want to emphasise that I have nothing against Sting wanting to help Abyss. I would have thought that after Mitchell was disposed of, Sting could offer to team up with Abyss as a tag team in order to help show him a new path. That would be cool and take some of the stress off Sting (who was getting on, let's face it). Then, Mitchell could return with a new guy who could wipe out Sting and cause Abyss to waver again. That way, a new guy could have a marquee feud and Abyss' face turn would be developed.

First off, let's talk about what the rules are, because nobody told the fans before Destination X. According to the announcer before the match, and I quote, "Where the competitors must call for the death bed to be lowered from high above the ring, and then you gotta take that beaten down opponent, you gotta put him inside that death bed, slam it shut and send it to the ceiling".

And just to add to the spooky atmosphere, someone decided to add candelabras and tombstones around the ring. Because obviously Russo thought that the two poor bastards didn't have enough of a challenge to stop the match looking ridiculous. And because nobody forgot to mention to Russo that most people don't die in a burial plot, but rather on a death bed, a flaw which would be compounded later on.

Speaking of candelabras, about three minutes into the match (including entrances), Sting goes for one of his Stinger Splash sequences where he would hit the guy from corner to corner using the TNA 6-sided ring. However, during one of the splashes Abyss grabs a candelabra and manages to hit Sting right in the face with it. According to where the blood came from. Though it looked like it hit him suspiciously near the gut...

So then Abyss calls for the death bed. Which starts to lower.

Suffice to say you could have watched a Triple H promo by the time this damn deathbed lowered into the ring. And just to make it obvious we were entering the darker stages of the match the lights were dimmed and the ring engulfed in smoke and a blue glow.

And just to make it obvious how the crowd felt about these subtle touches, a massive "Fire Russo" chant began emanating from the crowd. This could have been also due to the fact that the 'death bed' had a coffin on it, once again showing that Russo seemed not to know the difference between a death and a funeral.

As the "Fire Russo" chants get louder, the announcers attempt (badly) to get louder and more invested in the match to divert from the chants. Anyway, Abyss gets Sting in the coffin, but can't shut the lid due to Sting fighting back! The crowd goes...mildly wild (to be fair half the crowd wouldn't to be able to see what was going on due to the fact that the coffin would have obscured their view. All they would have seen is the rather hilarious imagery of Abyss seemingly struggling with the coffin hinges...).

After a little back and forth, finally Sting gets the ascendancy again. He then proceeds to get one of the tombstones (to the chants of "boring!" which Abyss seemingly struggled to carry a bit more, lay it against Abyss head and then swing his baseball bat at it where (and I am not making this up) and shattering the tombstone. A tombstone.

More like tombfoam. HAHAHAHA!!!! I'm sorry, but this match has driven me to it.

Many people point to the next big spot where Abyss chokeslams Sting onto the coffin, eliciting the chant "TNA!" from the crowd, as evidence that the Orlando crowd don't know what they want, considering they just called for Russo's head. I actually think that this shows that the crowd are willing to applaud the sacrifice of their wresters while being angered at what they have to shill.

Of course then we get the whole 'diabolical heel prop plan' bit. This works in wrestling when a) the heel is fairly efficient while doing it, b) it isn't too obvious that it's a set up spot and c) it isn't bleeding obvious that he could have won the match if he hadn't just focused on his opponent. Kevin Owens did this well against Roman in the Royal Rumble match with the chairs. This one, with Abyss getting a tombstone and balancing it across two chairs seemed to take ages, all of which time Sting had barely moved. Just stick him in the damn coffin! But no, Abyss was apparently concerned about the fang shui of the ring.

Of course Sting manages to reverse it and Abyss eats the tombstone, leaving Sting to roll Abyss into the casket (or more accurately, assist Abyss in the casket).

I think the plan was for Sting to go up on top of the coffin to sell the affects of the match on him. Unfortunately (and yes, quite amusingly) the weight of the coffin with Abyss inside and Sting together can't be pulled up by the ropes, something that the ref has to tell Sting as the cables struggle.

Russo has claimed that he made the Rock and he made Stone Cold and D Generation X and the whole Attitude Era. But it's matches like this that really show that he wasn't the guy that made those stars, he just was plugged in and wrote the things around them. Likewise, could you imagine Vince McMahon approving this sort of match for Steve Austin? Or the Rock? As much as wrestling has smoke and mirrors, at the end of the day crowds come to see wrestlers. And this match showed an incredible propensity for focusing on anything but, to the detriment of the two people it was supposed to put over.

And that's article 72! Next time we look what happens when you have a gimmick match but the gimmick isn't there! Until then!