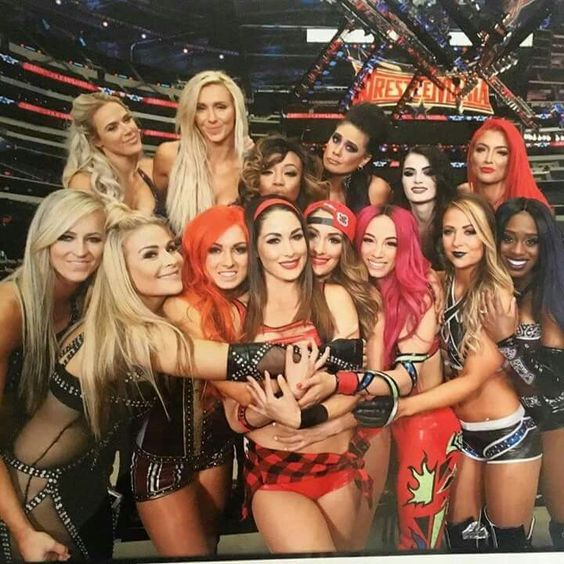 I’ve been watching wrestling since I was three years old, and being that there has never been an appropriate representation of a gay man in wrestling, I naturally gravitated towards the women as my point of interest. Seeing people who could be considered equal parts feminine (self-expression, body language) and masculine (wrestling, fighting etc) was something I connected with. It was definitely not presented the right way- ever- and it still hasn’t been presented properly.

My viewpoint on WWE was skewed, because I didn’t pay attention to any of the men’s wrestling. As I got older, I started paying more and more attention to all of WWE, particularly when NXT as we have come to know it now began. And that was when WWE’s treatment of its women really began to bug me.

I fell in love with NXT because it handled its women’s feuds the same way it handled its men’s feuds. Apart from some of Summer Rae’s angles with the BFF’s, women wrestlers didn’t fight over a man, or because of the dreadful jealousy storyline, or over catty stupidity in general. The women fought over being the best, period. Everyone was trying to become Women’s Champion, as it should be.

Slowly, my favorite era of wrestling came to the forefront of NXT, and really, the wrestling world as a whole (this was when NXT was reaching peak popularity): The Four Horsewoman Era. Bayley, Becky Lynch, Charlotte & Sasha Banks came to be big-name players in NXT by doing what no women had been allowed to do before- wrestle, the right way.

Wrestling in matches equal in depth & LENGTH to their male counterparts. That is how we came to take all four of those aforementioned women seriously, and thus women’s wrestling as a whole. But even then, there were things NXT did that really bothered me.

Bayley vs Sasha Banks for the NXT Women’s Championship at NXT Takeover: Brooklyn is my favorite match of all time. It’s a lot of people’s favorite match of all time. I was there live, and it is a moment I will never forget. However, even on that night, the women had been slighted in a "small" way. Sasha Banks had the best match on both of the previous Takeovers in a match against Becky Lynch and a Fatal Fourway with the Horsewomen. Then, she got to "Co-Main Event" with Bayley at Brooklyn.

What the fuck kind of bullshit is that?

If any man had done that, he’d be closing the show for the next Takeover, no questions asked. Add to that the fact that the story between Bayley & Sasha Banks was built to a boiling point over TWO YEARS (a slow burn that is unrecognizable in the wrestling world now), and it is absolutely baffling that they were not given the opportunity to close the show in Brooklyn. I said before this was a "small" slight on them, because this is how it is viewed by most people, but it shouldn’t be.

That was a huge moment that both competitors had worked towards their entire careers, and unlike many a story WWE has tried to tell, it was actually accepted by the fans. Imagine Daniel Bryan having his career-defining moment happen and it NOT close Wrestlemania 30... Exactly, unimaginable. Or Sami Zayn winning the NXT Championship in a slot before the closing act... Again, vomit-inducing.

While I am well-aware of the fact that we probably all would have said those moments "should have closed the show," just like we do with Bayley vs Sasha, the difference would be that those moments would’ve seen bigger repercussions from the fans that would have had lasting positive impact for Sami & Bryan. Because Bayley vs Sasha happened in a world and time that taught us all to accept a woman’s inferiority over a man, no questions asked, that’s exactly what didn’t happen- no questions were asked. Everyone took it with a grain of salt, because "ehh, WWE." This is unacceptable.

"Small" things like that are what built the foundation of the #WomensRevolutionEvolution as we know it today.

Sasha & Bayley not going last when all signs pointed to them going last. Asuka & Ember as well.

Bayley & Sasha main eventing a show that had no other singles match to challenge their place on the card, as though they had to be protected from underwhelming delivery.

Stephanie making grandoise statements and gesticulations about a "revolution," as though the moment itself isn’t engrossing enough.

Men like Finn Balor, Bobby Roode, Shinsuke Nakamura & Samoa Joe being allowed to consistently underwhelm in the main event slot, yet be allowed to prove themselves in that spot again and again, as though there weren’t endless acts outperforming them each Takeover (not just from the women, but from Tag Teams & European wrestlers as well).

The biggest night for Women’s Wrestling ever, Wrestlemania 32, having the headlining women’s match end at the hands of a man(be it Ric Flair or otherwise).

The first Women’s MITB being determined by a man.

Women being clumped together endlessly, instead of an intelligent two-person feud.

Sasha & Charlotte being overshadowed by branding or Ric Flair.

All of these "small" things add up to create one very BIG and detrimental idea: women aren’t good enough.

By continually undercutting the moments these women have earned for themselves, WWE nullified the effectiveness of the revolution as a whole.

I’m not going to explain why that is so wholly damaging, because it’s pretty self-explanatory. I am, however, going to say how disappointing the revolution has been since the Horsewomen debuted. Instead of having legitimate, one on one feuds, they’ve been reduced to branding fodder. It’s sad.

I could accept some safety precautions being taken in 2014’s NXT, because the revolution was fairly new. But after they’d proven themselves time and time again? I also get why WWE would feel some of its women can’t compete at a main event level, but give them the chance to fucking try, at least.

Only WWE’s golden girls, Alexa Bliss & Charlotte Flair have been allowed to underwhelm in hopes of growth time and time again, which is a clear indicator that not only does WWE not believe in its female employees as a whole, but they’re also not all-in on the women’s revolution in a genuine way.

As a lifelong fan (moreso avid observer, because WWE has never been kind to it’s female employees), it’s aggravating.

If you’re going to lecture me on how WWE only cares about branding and marketing and stockholders and so and so forth, then don’t bother. I’m not saying that I don’t understand WWE’s motives. I’m saying that their motives suck, and we should demand more from them as consumers, instead of just accepting their shit practices.

People are discussing how having Ellsworth or some other sort of male-induced chicanery would be funny for the Women’s Rumble, but that’s the exact kind of "small" thing the Rumble does not need. In over 3 decades of Rumbles where no female equivalent existed, only 3 women have participated in the Rumble. And one of those entrees (Beth Phoenix) saw WWE wink wink ‘womenlol’ by having her eliminate a man by making out with him. None of those entrants lasted long either.

The men have had more than their fair share of all-male Rumbles, so let’s let the women have their own all-female Rumble now too, don’t you think?

We need to demand more from WWE as a whole, and we need to stop allowing WWE to predicate the women’s revolution on male presence or marketing bravado. We need to want more before WWE gives it to us so the real Women’s Revolution can just happen already!

Should the first Women’s Royal Rumble feature a male entrant, if it’s entertaining? Or should it be strictly female?