And you thought Rosemary had it bad...

The Japanese style of wrestling can at times be confronting to the fan who was raised on a diet of WWE or WCW. While the idea of strong style has been mythologised a bit by birth promoters and fans, there is still a difference between the puroresu cards of Japan and the more... elaborate angles run in places like Lucha Underground or indeed the WWE.

Still, despite this emphasis on strong style and portraying matches as genuine fights, there still needs to be a degree of professionalism between the workers. In fact, one could argue with an emphasis on stiffness this degree of trust and professionalism is even more important than it is in places like WWE. Because when it goes wrong...it ain't pretty.

But I'm getting ahead of myself. Let's start by talking about this woman. 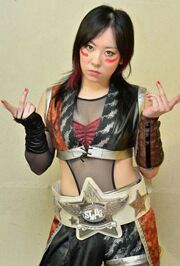 That is Act Yasukawa. It is difficult to equate exactly how the Japanese audiences saw her due to the fact that the heel/face dynamic there is so different. However, puroresu is based around the ideas of perseverance and never giving up. It's one of the reasons that babyfaces are rarely rushed into championship titles. Because for the Japanese audience it's more about the journey than the destination.

Well, Act Yasukawa had an amazing journey. Her adolescence was rife with obstacles, including being bullied and mental illness. However, soon she joined her High School Drama Club where, according to her own words from an interview with Pro Wrestling is Art

I could be anything that I wanted to be. I could be the action hero that I dreamed of. I couldn’t be a samurai in real life, but I could be one in film.

Soon another obstacle reared up when Yasukawa was diagnosed with Graves' disease, a severe thyroid condition. Despite this (and the fact that when she started training she could not do one push-up) a chance meeting with wrestler Yuzuki Aikawa saw Yasukawa join as part of the training class for joshi wrestling company Stardom, alongside Kairi Hojo- better known to some as Mae Young Classic Winner Kairi Sane.

Three months later, however, the disease intensified and Yasukawa's doctor advised her to stop wrestling training. The only other option to get cleared for wrestling was to take tablets to get her strength back- the side effects of which may have prevented her from ever having children. Yasukawa didn't hesitate and went with option b). However, the disease did do enough damage to create a massive cataract to send her blind in her right eye. Yasukawa's response? To wear an eyepatch and incorporate into her gimmick (she also used to spit rum into the crowd, where, being a fan favourite, fans would complain that they didn't get showered on).

Little wonder that Yasukawa would soon be awarded with the Wonder of Stardom championship (the IC title equivalent)- which she held for 234 days- the third longest in the promotion's history, until she had to vacate it due to more complications with her thyroid, as well as receiving cataract surgery to repair her right eye. As soon as she was out of the hospital, even before she was allowed to train, Yasukawa returned to Stardom to help sell merchandise to fans, despite no real obligation to. Her passion was that real.

Which makes the rest of this story all the more terrible...

Y'see on February 22nd 2015, Act Yasukawa was slated to walk away with the World of Stardom title (the top title). Yasukawa, who at the time was in the middle of her second Wonder of Stardom title reign, seemed to finally be able to reach her dream.

If only someone informed her opponent. 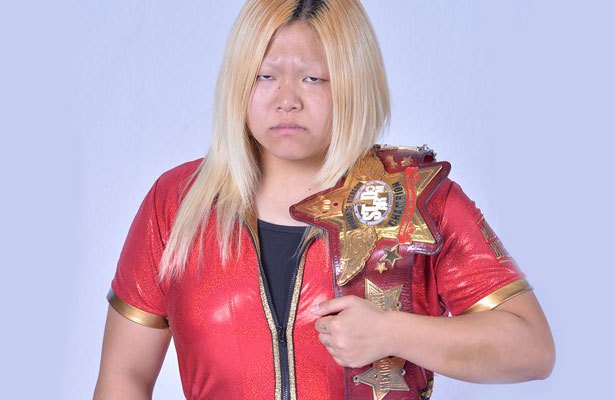 That was the current World of Stardom champion Yoshiko. Now, according to many sources, there was legit heat between the two workers coming into the show on that night. What was the root cause has never (and probably will never be) properly determined. Some say that Yoshiko was jealous of Yasukawa's popularity, despite the fact that Yoshiko was there from the beginning, while others believe that Yoshiko resented the booking. On the other hand it could have been something else entirely. What ever the reason though, it does not excuse what occurred on that night.

While I will go through the 'highlights' of the match here, I am not going to put a link to watch it because it is really uncomfortable viewing. From what I can discern at the beginning, Yasukawa throws a stiff (but worked) punch at Yoshiko before Yoshiko throws one back that's considerably stiffer. Yasukawa then throws one that isn't that stiff but lands flush on Yoshiko's cheek and then it all goes to hell, with Yoshiko forcing Yusukawa into the corner and landing rights right into Yasukawa's face before forcing to her the ground and doing the same.

Finally (after about trying three different approaches, including getting Yoshiko in a pseudo-headlock) the ref manages to cause some separation, allowing Yasukawa to get back into her corner to be treated for what looks like a broken nose and other facial injuries.

At this stage it should have been clear that the match was simply a no go. So why didn't the ring doctor call it? Simple, they didn't have one. Just think about that for a second. In arguably the biggest joshi promotion in the country in a sport where people are required to throw and clothesline and land on each other in the normal set of circumstances and you don't have a ring doctor? So why didn't the ringside trainer call it? Or the ref? Or fucking someone who could see that something was amiss?

Because if anything can be gained by Yasukawa's story, it's that she wasn't going to back down. And that's not unique. We've all heard stories from wrestlers that show they are the least cognisant of their own welfare when the crowd is baying them on. So what we get instead is Yoshiko brawling and smacking Yasukawa all around the head (and occasionally stomping in the back of it for something different) while Yasukawa's trainer screamed at the ref to do something and the ref shrugged his shoulders as if to say "well you could throw in the towel".

In the meantime, while everybody with some power is looking uncomfortable without actually doing something Yasukawa was getting inflicted with blow after blow after blow. And in the heat of the moment (and possibly due to a substantial concussion) Yasukawa would not back down. It needed someone to actually take some leadership of the bloody situation and stop the horrible match that was going on in front of them. Even the crowd as it went on knew something was significantly wrong as, while they chanted for Yasukawa, there is an air of distinct discomfort amongst the fans.

Eventually, however, sanity prevails and after Yasukawa rolls out of the ring after what is yet another barrage of stiff punches, her trainer throws the towel and stops the match (she then proceeds to make her feelings known to her opponent by racing across the ring at her and threatening to rip Yoshiko's hair from its roots with only the other workers who stop it from getting even more ugly).

The match took a huge toll on Yasukawa, with a broken cheekbone, nose and a fractured orbital socket on her right eye- the eye she had surgery on. It would be this particular injury that would force her into retirement- with a three month farewell run culminating in December 2015. Such was her love for the sport and the promotion though that she blogged the next day for her fans urging them not to think badly of the product (she actually had to dictate this blog to her mother as her eyes were swollen over at the time and thus she couldn't see the keyboard). The match itself would soon be known in Japan as Seisan Matchi- Ghastly Match.

Stardom took drastic action following this incident, stripping Yoshiko of the top title and suspending her indefinitely. The President, General Manager and Head Trainer all then took 30% pay cuts, though Head Trainer and veteran worker Nanae Takahashi perhaps was unjustly treated, as she wasn't actually at ringside, but rather was fined for not training the workers properly (?). Little wonder that she decided to leave the company soon after. Furthermore, the promotion decided to employ- shock horror- doctors at ringside, while closed fists were explicitly banned.

All of this however would not get Yasukawa her career back. And that makes me frankly furious. Because this is not a Edge situation where a guy who had a storied career had to retire due to a lot of bumps on the way. It's also not a Daniel Bryan situation where fate has cruelly snatched the man's future years of greatness away from him just when he reached the apex. It's not even a Bret Hart situation where a botched move or two totally ends a great career. This is a situation where a worker decided to go in to hurt rather than to work and as a result another worker was deprived of doing what she loved.

And it wasn't just a worker who saw this as a paycheck, like a certain suplexing gent we could all mention, but instead someone who saw all of this as way to entertain people and to help people who were going through the same mental illnesses that she was as a teenager. Instead, because of a group of officials who collectively were not prepared to nip a potentially volatile situation in the bud. And as a result they lost one of their most potentially marketable stars. Look at the resolve and drive of this woman and tell me you don't see money. Imagine if, like Kairi Sane, she got the chance to move to the Perfomance Center. But that's all we can do- imagine.

Oh, and Yoshiko? Ended up in a couple of MMA fights before returning to wrestling under the new Seadlinning promotion. Run by Nanae Takahashi.

And that's article 79 (if you need a lie down after it I'll understand...). Next time we move into the mysterious world of the Worked Shoot to try and make Scott Steiner seem like a consummate professional. Can it be done? Well, no- otherwise it wouldn't be here, but anyway, see you then!