At Wrestlemania VI Hulk Hogan would hit bare canvas with his arse as Ultimate Warrior rolled out of the way of his patented leg drop before covering Hogan for 3 and a half the pin. History would be made as the Ultimate Warrior would now be able to hold the title and the fans would salivate for the rematch which would no doubt occur at Wrestlemania VII.

Add to that the fact that the Warrior's gimmick and move set didn't endear him to longer matches and it's easy to see that he wasn't going to move any sort of needle in a positive direction. In fact house shows (which at the time was what Vince based his feedback from- rather than the ratings) were going through the floor. So unsurprisingly Hogan vs Warrior 2 was shelved.

What they came up with instead was frankly nutty. 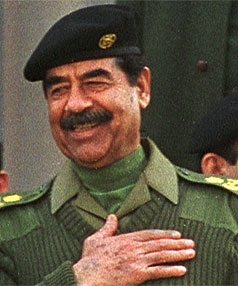 Vince had already made hay out of the Gulf War already with managers such as General Adnan. But it was his decision to take the returning Sergeant Slaughter and turn him into an Iraqi sympathising heel that perhaps showed that McMahon was willing to ride out this for as long as he could. And when Slaughter won the title from the Ultimate Warrior at the Royal Rumble thanks to interference from the Macho King Randy Savage, it looked like the WWE had its heel that Hogan could steamroll over in order to bring the planets in alignment again.

Well, before everyone could begin cuing Real American on the PA, there was still one or two bugbears to sort out.

For a start, no matter how ordinary Warrior had been with the belt, there was a reason why Hogan was taken away from the championship. The simple fact of the matter was that Hogan in 1991 was not lighting the wrestling world on fire the same way that he had been before (the fact that it took him another 5 years to turn heel probably shows how much of a stagnant phase this was in wrestling). But because Vince had ridden the Hogan train into the ground, with only Randy Savage (who was now a heel) and the Ultimate Warrior (who seemed as anachronistic as Hogan) being pushed as any sort of baby face successor, McMahon felt he really had no other option but to plump back to the Hulkster to try and sell tickets.

The second thing was...Slaughter had an odd run to the championship. His gimmick was originally that he turned on America because they had accepted Nikolai Volkoff, a former (kayfabe) wrestler of the Soviet Union in their country. So his 'push' before gaining the championship was not about feuding with Americans per se, but feuding with liberated pro-west members of the former Soviet Union. And then, all of a sudden in January he was WWE Champion. It screamed last minute and did nothing to really help Slaughter as a credible heel.

The third and most perhaps important thing was, that it would seem by the crowd numbers that people were much more willing to forget the gulf war at this stage than actually try to embrace it for their pop culture. Not because it was going badly (as we will see soon, if anything, it was going too well for this story) but because due to the advent of 24 hour news footage there was much more news for citizens at home to consume and as a result they became fatigued by it much more quickly. Add to that the broad stereotypes that the feud was bringing in and it seemed trivial compared with the footage that was coming in night after night.

Oh, and of course the damn war ended almost a month early, leading to Vince having a feud that history had essentially left behind and a stadium with potentially 65 000+ empty seats. So WWE moved stadiums in one of the most humiliating behind-the-scenes Wrestlemania moments in the company's history. The Silverdome this wasn't...

But who knows? Maybe Sarge and the Hulkster could pull the fat out of the fire with a great match and all would be forgiven (or forgotten).

You can't fault WWE's attempts for attempting to get you to invest. As Hogan marches to the ring waving the American flag, there's at least 5 shots of cute kids wearing Hulkamania shirts in the crowd. Gorilla Monsoon talks about Hogan as "the national hero" (I suppose Lincoln slipped his mind...) and Slaughter as "the turncoat" before they get in each other's faces, causing the referee to break them up in a surprisingly amusing bout of hammy acting (incidentally, is it just me or did referees in old matches have a lot more license to 'perform' then they do now?).

One of the main gripes against this match is the timing of the two guys is off. Not consistently, but enough to make you realise that the chemistry is not there. Slaughter at one point attempts to stamp Hogan's hand...only for Hogan not to sell it because his hand was actually a half a foot away. Hogan slings Slaughter on the ropes and tries some sort of elbow...only for Slaughter to take one too many steps before he takes the bump. Or Slaughter clotheslining Hogan out of the ring with a blow that doesn't actually seem to connect.

Speaking on slinging into ropes, there is a lot of throwing into turnbuckles. Which, unsurprisingly, gets repetitive and when you have two guys you already suspect of not having the most extensive move sets...it kinda gets old fast. And then there's the moment where Slaughter has Hogan in the Boston Crab half a foot from the ropes and we're waiting for Hogan to grab the rope...and waiting...and waiting...to the point where even Bobby Heenan says "why doesn't he just grab the rope?"

It may seem from the comments above that I think the match is awful. Actually, in the second half it does pick up. There's a vicious top rope stomp that Slaughter does to the back of Hogan (that would have won him the match if Adnan hadn't distracted the referee from his own guy's pin, which was frankly stupid). Then Hogan gets a bit of colour to put over Slaughter as a sadistic madman, including doing his whole 'seizure-from-blood-loss' selling bit and kicks out of a pin while being covered with the Iraqi flag. One comeback and leg drop later and Real American is soon blaring.

The thing is...throughout the match the announcers keep talking about how we're seeing "a new Hulk Hogan". But we're not. We're seeing the old Hogan and all that entails. Indeed, the match at Wrestlemania 7 only showed how much of rut wrestling was in. This was 1991. Hogan didn't turn heel until 1996. In between you had some great workers like Hart and Michaels who should have got to the top of the card, but Hogan was still there. And then when he went to WCW he pushed bums like Steve Austin and Mick Foley down the WCW card. Go figure.

It's not that WCW and WWE were in denial, it was more that they were more willing to continue to flog the rapidly dying horse of Hulkamania rather than take a leap forward.

And that's article 71! Next time is the first of series of articles where we look at some of the most stupid stipulations and gimmick matches in the history of wrestling. If only there was some way that the crowd could articulate to us who is to blame...