(Ain't this a thing of beauty?)

On this edition of the Saturday Slam, we're going to do something a little different. Instead of highlighting a specific move, we're going to compare two very similar techniques: Clotheslines and Lariats. Now, you're probably on your way to Google right now to look up what makes them similar (I realize this series I've started is wholly counterproductive), but in the spirit of providing content to a community I love, I'll go on and weave something here.

First things first, we have to send for the man: 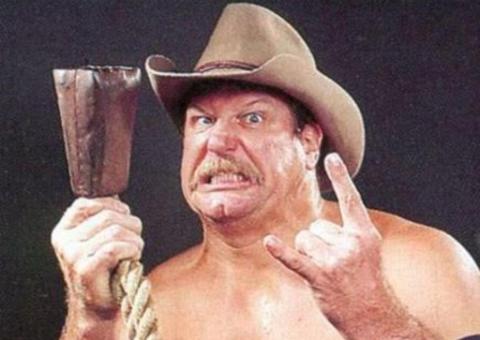 Stan "The Man" Hansen was a tough son of a bitch in his heyday. Known for his incredibly stiff wrestling style (a style he attributed to poor eyesight), Hansen threw the most vicious lariats this side of the Mississippi, and is credited for making the move famous (it's not clear if he innovated the technique, research can only go so far, I'm afraid). His tough demeanor was seemingly vindicated when he was reported to have broken the great Bruno Sammartino's neck with his lariat in a championship match in 1976 (It was later confirmed the injury came from a botched powerslam). Fun bit of trivia, a lariat is another name for a lasso, a loop of rope used by American cowboys to "wrangle the herd," as the saying goes. Plays into Stan Hansen's gimmick of a no-nonsense cowboy who wants to fight all of the things.

The name of the move makes sense from a technical standpoint as well, as a lariat is executed simply by running towards your opponent, curling your arm around their neck and/or chest, and forcing them to the ground.

As you can see, there are multiple variants of a lariat, such as a lariat takedown (or a running neckbreaker), where you swing your legs forward using that momentum to pull your opponent to the mat, or a crooked arm lariat, where you bend your arm upward at the elbow 60-90 degrees, wrapping the arm around your opponent's head instead of your neck. The Rainmaker (shown above, a wrist-lock transitioned into a short-arm lariat) is probably the most well known aside from a standard lariat (or a Western lariat, as it was called), simply because the man behind it, Kazuchika Okada, is so popular with wrestling fans these days. A lariat can also be performed with your legs, simply jump and wrap your legs around your opponent's head and neck, sending them to the mat (Zack Ryder's finishing move, the Rough Ryder, is a leg lariat).

Now, the origins of the Clothesline are just as foggy. It's unclear who originally innovated the technique (feel free to clarify in the comments if you wish, I appreciate any and all input), though multiple wrestlers were known to use the technique. "Hacksaw" Jim Duggan would often finish opponents with a clothesline from a three-point stance (one hand touching the ground with the other arm cocked back to the thigh/hip region, the back slightly inclined forward, as well as the arm which is placed on the ground), and the likes of Dynamite Kid and Nikita Koloff delivered wicked clubs in their respective heydays.

In terms of what makes a clothesline and a lariat different, it's all in the position of the arm. As I stated before, performing a lariat requires you to curl your arm around your opponent's neck and/or chest. A clothesline (like the name would suggest) requires your arm be perfectly straight. This is why people (mainly commentators, much to my chagrin) often confuse a clothesline for a lariat, and vice versa.

For reference, this is a Clothesline (The best in the business today):

And this is a Lariat (A contrived lariat but still a lariat):

Everybody taking notes? Good, because you'll need to on account of the numerous variants of a clothesline. They're both such versatile moves, which as mentioned in previous chapters, I love me some good versatility. You can clothesline someone from the air, off the ropes, from a vertical base, from a wrist-lock, over the ropes (known as a Cactus Clothesline, affectionately honoring Cactus Jack), when you get down to it, nothing beats a good clubbing shot to the jugular (especially if it's sold like death, like when Seth Rollins or the King of Selling, Dolph Ziggler take one).

I've gone on for long enough, I think you ladies and gentleman get the point by now, so we'll call this a chapter. When next we meet, we'll shift gears from moves to holds, an take a look at one of the most famous holds there is. You might say it's the best there is, was, and ever will be...