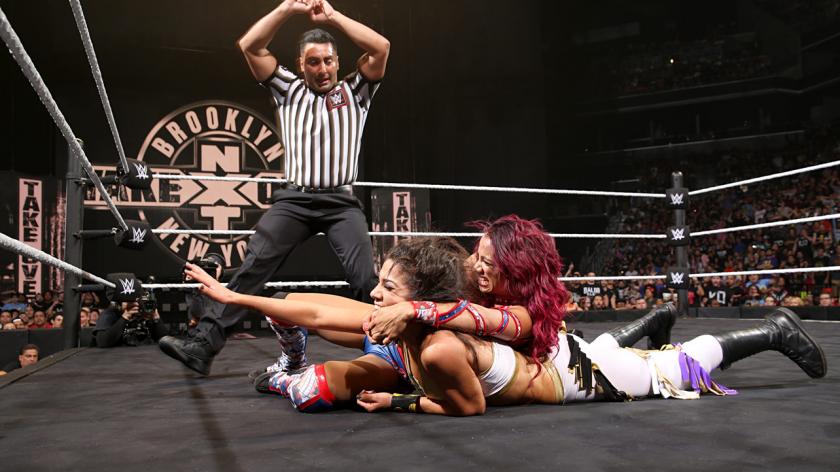 It's insane how much it can't be stressed how much Saturday, August 22, 2015 was a catalyst for women's wrestling in WWE. Actually, not so much a catalyst as it was THE catalyst.

Reading that sentence sounds like a lot of hyperbole and I wouldn't blame you if you thought that. Except that hyperbole feels justified in this instance. It's worth noting we've had excellent women's matches before Bayley and Sasha Banks' incredible barnbuster a year ago today at NXT Takeover Brooklyn, whether on NXT or the main roster long before the pair were in the WWE.

Even in the six months before that match, there were at least two women's match of the year candidates in the Fatal 4 Way between the Four Horsewomen at NXT Takeover Rival and Sasha's incredible championship match against Becky Lynch at NXT Takeover Unstoppable. Such was the quality of the latter that it could have been argued as a contender for outright MOTY, let alone women's MOTY.

It's why the recent WWE 24 documentary on the women's division and the origins of the division, the rise of Trish Stratus and Lita at a time where the division was anything but about the wrestling, the era of the divas and the birth of the Four Horsewomen within NXT and the WWE main roster is such a great watch and shows the massive night and day difference in the past fifteen years. It was refreshing to hear the likes of Trish and Stephanie McMahon talk of the difficulties of being a female talent in a time where the division was about bikini contests, bra and panties matches and 'puppies' (ugh).

But the reason why Sasha Banks and Bayley stand out here is, besides their incredible match in Brooklyn, they merely know: what came before in the past and how they want to go about changing the business for the future. They know this - and can do this - because, their obvious talents aside, they're the biggest fans of all as two girls who wanted to become wrestlers at 10/11 years old. They care because they grew up loving wrestling. It shows in their work and ethic, as well as chemistry for each other both in-and-outside the ring. Even look at Bayley during her title reign in helping to develop other wrestlers in NXT: Nia Jax, Alexa Bliss, Carmella, even Eva Marie.

Said Sasha in the WWE 24 documentary: "When we were in NXT, we called ourselves 'Average Janes' because we were just average. Just loving and so excited for what we were doing."

In building to their match at Takeover last August, they had The Boss gain the NXT Championship in the Fatal 4 Way at Takeover Rival and start her build by having TV matches for the title with Alexa Bliss, Becky Lynch and Charlotte (the latter numerous times).

Bayley's build, meanwhile, was a slower burn that goes way back, but one that paid off in chunks. Look, andrewmswift's chronicles of Bayley do a better job of describing it than I ever could, so I highly advise you check that out if you haven't already.

But the shorter version is this, starting from Takeover Rival: loses the Fatal 4 Way despite being so close to winning it, ends up in a feud with Emma and Dana Brooke which stretched out a bit - including a Takeover Unstoppable tag match with Charlotte as her partner - takes time off from a broken hand before coming back in a series of matches to show she's worth champion material, including a feud-ending match with Emma plus matches with her fellow horsewomen Charlotte and Becky Lynch. All of which she won.

It's worth noting too the incredible contract signing between the pair. It's a huge part to the build and absolutely can't be ignored. Bayley's nervousness and slight stuttering at times (something not there in her contract signing with Asuka for Takeover Brooklyn II thanks to her fantastic character development in the year since), Sasha's taunting of Bayley to the point she just snaps and we suddenly see that passionate side of Bayley, an edgier side not seen until that point that showed that she could end up doing this. One of the best contract signing segments in WWE, if not NXT.

And not to mention the video package before their match which is up there with even the best promo videos in the WWE, such as Rock-Austin at WM17.

The match itself, there's no need to go over with a finecomb. You know what happened. I know what happened. And if by some God-given reason you've been off the grid for the past year and you've not seen it yet but you're somehow reading this - what's wrong with you, get on that now. But to say it still lives long in the memory would be absolutely the correct way of saying it.

The reason it's absolutely the best women's match in WWE history, and quite simply one of the best matches of all time regardless of gender (it's my favourite wrestling match ever), is because of the clash of ideologies, psychology, the chemistry, the spots and move-set, the rivalry between the two built up over a two-year period. The pair deserved - and still do deserve - most of the plaudits and applause for the match they gave, but part of the credit has to go to Paul Levesque, Ryan Ward and the NXT creative team too for putting together a slow-burning feud that gave an absolutely incredible payoff and perhaps gave the brand its Daniel Bryan moment in having Bayley win the title.

But the reason why it was such the catalyst for women's wrestling in the WWE from that match forward all comes to one simple thing: it showed at an event where there were more eyes on the product than ever before, both at the Barclays Center and watching at home on the Network, that women can put together five-star matches and not just be relegated to mere eye candy. It showed women's wrestling can move on and has moved on from an era of sex appeal and barely any wrestling.

Women, not divas, are now on par with the men as superstars. The butterfly belt is gone and resigned to history. And biggest of all, a marquee match at Wrestlemania where the competitors were front and centre of the main art at AT&T Stadium, Dallas. I certainly couldn't have imagined such a thing a year beforehand after Wrestlemania 31 in Santa Clara, especially moreso the night after on Raw during the six-woman tag match.

The divas revolution/women's evolution has stalled at times and even given moments where you question where they're going to go next after something idiotic or stupid happens on a booking level (the Reid Flair spot in the Charlotte-Paige contract signing pre-Survivor Series, a fantastic feud in Charlotte-Becky Lynch for the title ruined by Ric Flair's "wheelin dealin' etc etc bull-nonsense at the Royal Rumble).

But when you have moments like the Takeover Brooklyn match and the subsequent curtain call between the Four Horsewomen - an iconic moment, not just in WWE but in all of wrestling - the Ironwoman match at Takeover Respect, the Sasha pop at the Royal Rumble, the Wrestlemania triple-threat, Sasha Banks-Charlotte's utterly incredible title match on the first new-era Raw, the Attitude Era-like pop and reception to Bayley's main roster debut at Battleground, there's still hope yet and even reaffirmed when these moments happen.

It's truly amazing how much has happened in a year for these two since Brooklyn. For Sasha, being one/third of a Wrestlemania main event, her championship coronation and the response after on Raw and being one of the faces of the entire company (she's the last face you see on the Raw intro, a shift away from the likes of Cena and Reigns).

For Bayley, carrying the NXT women's division in her time as champion, being the face, the heart, the soul of the brand as well as her aforementioned main roster debut at Battleground and her final farewell this past Saturday night after the Women's Championship match at Takeover Brooklyn, a moment she truly deserved on the biggest stage of NXT's year. If she gets her full main roster debut tonight like we suspect she might (and even rumoured), she is going to get the pop of the year. That, I have no doubt.

If you had told me at the start of the decade, my favourite wrestler would be a female wrestler, I would have laughed at you. Six years later, lo and behold, we've come a long way with women's wrestling in the WWE that such a thing isn't a pipedream anymore. The Four Horsewomen - but especially Bayley in particular - made me believe in women's wrestling again. Such a thing absolutely can't be ignored. It all started again for me with that Fatal 4 Way at Takeover Rival with all four of the Horsewomen, made official by Takeover Brooklyn and solidified by Takeover Respect thanks to Bayley and Sasha.

Last year's NXT Takeover Brooklyn was the greenshoots out of something special in the works. There may have been some teething along the way and there surely will be more of it to come. But if it's anything like the slow-burning payoff to Bayley's coronation as NXT Women's Champion a year ago today, the payoff here will be nothing short of incredible.

Here's to it. And here's to what went down a year ago. Thanks, Bayley and Sasha.

Johnny Cullen writes about games for a living and has written for the likes of Eurogamer, VG247 and Official PlayStation Magazine UK and also podcasts about games for My Favourite Game. You can follow him on Twitter - for mostly games hijinks but also WWE tweets (and be a bit obsessive over Bayley), The Last of Us, Metal Gear Solid 3 and Jonsi & Alex) - @JohnnyCullen.