They just don't make rings like they used to...

There is something of a wonderful story behind the emergence of AJ Styles in WWE. Not just because he is arguably the wrestler of the year at the moment, or because he is emerging as one of the faces of the blue brand but because many of us in the IWC were afraid that at 38 the WWE would regard him as too old to invest in him and we would always be deprived of seeing what he could do against on the biggest stage of them all.

On January 4th 2010, Eric Bischoff and Hulk Hogan made their first appearances in the Impact zone, marking the on-screen debut of the two men who were charged with taking the franchise to the next level. Behind the scenes they began to sign past WWE stars to bring legitimacy to the brand. 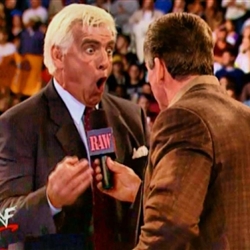 Yes, Ric Flair was brought back by Bischoff and Hogan and was soon seen associating with AJ Styles, anointing the Phenomenal One as the new Nature Boy.

Now, at this point a word needs to be said about Flair. There is no doubt that in the ring there was few better at putting over opponents and making them into stars. If there was a Ric Flair like figure in the WWE at the moment maybe Roman Reigns would have had an easier time getting to the top. However, as a manager putting over opponents and his own clients alike there needs to be a separate evaluation.

Look, one can understand how writers of WWE and TNA would probably think that the Nature Boy would put his prospective client over, given his history of doing it as an in-ring performer, but the fact of the matter is that there is only one instance where Flair has really added anything to a guy's schtick and that was Triple H/Evolution- partly because he was still wrestling a bit a the time and partly because Triple H was secure enough in his own gimmick that he could achieve a sort of parity with Flair's own (at the time slightly subdued) legend status (at least in kayfabe). But when he gave the Miz the Figure Four leg lock prior to Wrestlemania 29 all that was being thought of was the fact that the Miz was being compared to Flair- a comparison that poor Mike could never hope to win. Even in the case of Charlotte all it did was reemphasise the fact that she was Flair's daughter, without giving her the chance to strike out on her own. And when the likes of Becky Lynch and Sasha Banks were beaten by Charlotte, they were invariably distracted by Flair who, though a legend, was a 60+ year old man- a fact that put a bit of handbrake on the whole 'Divas Revolution' idea.

Paul Heyman is a great manager because he covers Brock's defences- allowing the audience to focus on Brock's strengths. Flair on the other hand, is just too big a gimmick to be kept on the side, and therefore makes his client's deficiencies all the more obvious.

But what of Styles' opponent? 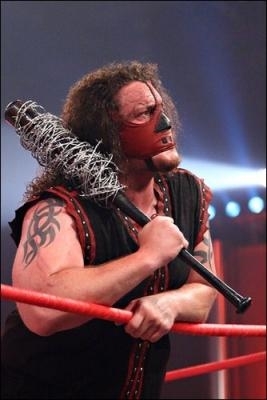 Dutch Mantell has said how much he feels Abyss has been misused in Nashville and it is easy to see why. At Against All Odds he was up against Mick Foley with the stipulation that if a barbed wire bat was not used in their match, Abyss would be unmasked. And although the Monster was victorious against the Hardcore Legend, the bat was not utilised, meaning on February 18th 2010 Bischoff was going to unmask Abyss in the ring. Luckily, Hogan came to the ring and saved Abyss from Bischoff and his henchmen before giving him a pep talk in the locker room.

Strictly as a promo, I can honestly say that I think it's one of the best promos Hogan has given post-WCW. He is full of piss and vinegar and puts over how much he had to do to earn that ring and how now he's a shell of the man he used to be because of it. Abyss is also good- channelling a broken Mankind-y sort of vibe (though one could only dream how good it would have been if it was actually Mankind or Cactus Jack getting this pep talk). So the actual workers can't really be faulted.

However, halfway through the promo, we seem to go from TNA to Lucha Underground as Hulk Hogan grants Abyss his ring in order to make him 'a god' of wrestling. For one thing, it's a kinda needless McGuffin, like if the Starship Enterprise had a outdoor patio. Secondly, there's the fact that Hogan says it'll make Abyss ten times the wrestler, the man and stronger than Hulk ever was.

Look, I know that Hogan was trying to put Abyss over here and I applaud him for trying (although the cynic in me wonders if this was an oversell so that the audience would just brush it off) but 'ten times the wrestler'? Really? Why not just get Hogan to say that he believes in him and put him over a bit? Or slap him around until the monster comes out screaming rather than this odd tribute to Captain Planet. Because now what we have is a baby face who is apparently powered by a WWE Hall of Fame Ring (an odd nod to the competition- perhaps the reason VInce didn't sue) and a heel who has been anointed as the next keeper of a gimmick he can't possibly live up to.

And that's just before the match...

The entrances of this match are a bit laughable in themselves. You have Abyss cupping his ears to one side of the crowd than the other a la Hulk Hogan while Styles comes out in a bedecked robe with a hood (which covers his face completely making him look like an idiot) with Nature Boy Aj Stlyes written on the back of it. It's like in the WWE video games where you'd get Sheamus to come out to Dude Love's entrance actions (or maybe that was just me...).

The match itself starts out fine...there's some nifty moments in there and the raised entrance ramp allows TNA to do things that WWE workers simply can't- which can be seen when AJ tries a running drop kick on Abyss who is tied up in the ropes only to be countered into a over head belly to belly suplex back into the ring. As a person who watches WWE predominantly it's an interesting small point of difference which can make the structure of a match subtly but significantly different. There's also a nice heelish bit where AJ attempts to put a chair into the corner, only for the ref to spot him doing that, however while the ref is trying to take the chair out AJ attempts to choke Abyss on the ropes with a cable.

Then AJ hits his Spiral Tap move (a corkscrew senton bomb which is just...beautiful) and Abyss kicks out, Abyss then manages to hit his Black Hole Slam on AJ, who a moment before was berating the ref for what he thought was a slow count to which AJ kicks out. The crowd are up and waiting for the big finish.

And that's when it all goes to Hell.

Flair, who's in a wheelchair due to a previous altercation with Abyss, wheels up to the ring (remember the entrance ramp height) and blinds the ref with pepper spray before tossing AJ the belt after AJ gives Abyss a low blow that we don't really see because the camera is too busy with Flair. Then AJ whacks him with the belt before Hogan comes out, complete with new ref Earl Hebner and wheels Flair back to the entrance.

AJ, while perturbed, hits a springboard 450 splash and covers before Abyss does his own version of Hulking up (which essentially involves shaking his fists for about 45 seconds while walking around the ring while poor AJ attempts to walk behind him and hit him while Abyss no sells). He then hits the big boot on Styles before chokeslamming AJ through the ring (in actual fact, he pretty much chokeslams AJ to a point where the ring dips before a mysterious hand tears the ring apart to let AJ down). Then the ref throws the match out which seems...weird (if AJ can't continue, doesn't that make it Abyss' title- isn't that the point of a 10 count?) before Ric Flair comes out to claim Styles' retained championship. before he gets choked and sprayed with the mace along with Desmond Wolfe and both then fall down the hole, turning the TNA Heavyweight Match into something from Wacky Races.

My main problem with this whole feud is not the workers, but the fact, like the Hogan/Abyss promo I talked about earlier, there doesn't really seem to be a consistent tone that everyone is aiming for here. Just when you think they're going for an old southern style wrasslin' sort of program, the whole thing does an about face and becomes OTT with chokeslams and pepper spray and overbooking. And I can't help but think if you removed Flair and Hogan from the equation it wouldn't feel like you were trying to please everybody but rather be focused on trying to put these two accomplished workers over in a great match.

And by doing this of course you are essentially treating your rising stars not as the future of your brand, but a kind of shadow of workers past. It's like Chris Jericho said- what's the point in being the next HBK when you could be the first Y2J?

Unfortunately TNA could not see that- and Abyss and AJ suffered as a result.

And that's article 64! Next time we're staying in Nashville to look at a group from Philly. See you then!