Please Note that there has been a delay between these articles due to PhD commitments and a family bereavement. Thanks for your patience!

Where Kurt Angle learned the truth- that Paul Heyman sometimes goes too far...and so signed with Vince McMahon.

Pro wresting is a funny business.

Essentially you are trying to get one guy hated and one guy loved- in most feuds at least. We as an audience want to see the baddies get their comeuppance from the big hero who then walks away with his title/ girl/ pride restored/ insert whatever wacky stip here.

And as wrestling has gone on, promoters have often found harder and harder to generate the kind of outrage that would get the fans hot enough to really buy into a feud.

And one of the promotions that was arguably more guilty of this than any was Paul Heyman's Extreme Championship Wrestling.

Other promoters have given their two cents about what ECW did to the landscape of wrestling, so I will not go into great detail here. Suffice to say though that the extremes (ha ha) it went to in order to attempt to portray something fresh did work in the short term but also blunted the 'cut through' of angles in the long term. Was this continuous search for controversy and shock at the root of this misfire? Or was it just an mis-thought out angle?

In December of 1995 James Fullington, better known as the Sandman, was in the beginnings of a championship run. Certainly not the most talented wrestler in terms of ring-work, Fullington was a great example of how Heyman could tailor make a gimmick to his talent and then let the worker make it his own. Although he was being booked as a heel for much of 1995, his schtick was getting over in the eyes of the fans who once again wanted to cheer the Sandman on.

Generally it's easier to make a heel into a good guy than the other way around. After all, if you're cheering dudes for doing what they're doing all you have to do is line them up against heels instead of faces and watch them go! Turning the other way around requires a bit of justification, otherwise...why would they have beef with the babyfaces?

In other words, it should've been easy to make Sandman beloved again. All it would take is the right evil bastard for him to line up against. 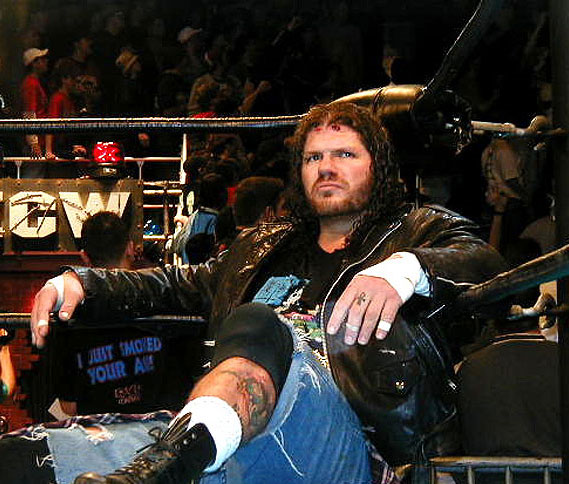 Scott Levy aka Raven essentially re-invented himself in the world of ECW. Taking homage from the Edgar Allen Poe gothic novel as well as grunge culture, Levy used his own intelligence to begin to craft and articulate a heel persona that was truly unique (though it has to be said that the poem the Raven is not a horror poem but rather a poem about a student whose guilt addled mind over the death of his love makes him fixate and drift into madness).

Sandman was a dude who left to beat the shit out of people and drink beer and the crowd loved him for it. He was simple. Raven? Raven was anything but.

It had the makings of an awesome rivalry.

1996 saw both men share time with the ECW Championship as neither could get a clear break over the other. However, soon Raven would play a trump card by introducing Sandman's ex-wife and (more importantly) Sandman's son Tyler as part of the Raven's Nest- his faction and cult. Raven's mind games would see Sandman break down into tears as Tyler claimed that he loved Raven more than Sandman, while Raven continued to poison his mind with claims that their parents' divorce was Sandman's fault as well as having Tyler perform his taunt 'the Raven's Crucifix'.

Both wrestlers knew there was only so much of Tyler striking a stigmata pose they could do before it would eventually begin to pall for fans. With Raven doing a surprise return on the October 26th episode of ECW television, Levy came up with the idea of crucifying the Sandman.

In an almost comical turn of events, Fullington provided Levy with the cross (not in kayfabe but in real life- Sandman is not that stupid), having built it himself in his garage. And so on October 26th, Tyler, dressed in a Sandman shirt would come to the ring and embrace his father...only for it to be a ruse to lure Sandman into a vicious sneak attack from Raven who piledrove Sandman through the table and then with the help of Stevie Richards and the Blue Meanie tied him to the cross, leaving ECW fans with the following image. 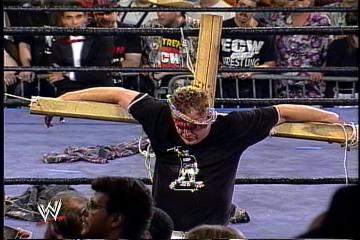 According to Raven, the three prominent people who were the most put off by this were Taz, Joey Styles and a visiting Kurt Angle, who Paul Heyman was attempting to lure to the ECW roster. Angle was so outraged that he demanded that any footage of him or his name in the show be cut or he would sue.

Heyman replied by saying that he had no knowledge that Raven was going to perform the angle (obviously he thought that Richards and Meanie were about to carry the crucifix out in order to indulge in some early Yuletide caroling) and made Levy apologise for his actions, which he did in a sort of "If-anyone-has-been-offended-I-apologise" (Translation: If you have some weird beef with this- then fine.)

Levy has never really begrudged Heyman for making him go out there and apologise, as Heyman was in the act of chasing Angle but as Levy correctly says, it wasn't as if ECW were ever going to realistic shot of getting him. McMahon would have always seen Angle as a hot prospect and the idea of Heyman getting his hands on Angle would have infuriated Vince (it would have also annoyed a lot of the older WWE bookers and agents who would have probably been worried that such a brilliant talent like Angle could be beaten into disrepair before he even got to WWE).

The big problem with Raven apologising though was it essentially showed to the ECW audience where the line was- which not only allowed the audience to sort of 'gauge' exactly how far ECW could and would go, but it also made them question why this angle, this one was the one which suddenly got everyone so scared.

See I understand if people are offended by religious iconography. That's fine. But I'm actually on Raven's side a bit for this debate. For a start, crucifixion's were a popular punishment for Rome's enemies long before Christ came along and against lots of different races and cultures than just Christians. Secondly, yes, Raven probably drew on our own familiarity with the cross thanks to the Bible, but it's not like he was the first. Thirdly for all those who thought that Raven was having a pop against Christianity because he was from the Jewish faith (like Heyman)- otherwise he would have crucified Sandman on a Star of David...Really? No offence, but I don't really see how lashing Sandman to a prominent symbol of Zion would have made for a less controversial show.
Because ECW had men beating up defenceless women, objectification of women, horrific injuries including a time where a youth was severely injured in the ring when he lied about his age and was bladed too deep. And yet for all that (and a shitload more) this, this is the thing where Styles and Taz decided to get up on their soapbox about. And not because seven year old Tyler was watching his father hang bloodied like a piece of meat- that was fine. But to do it while invoking Christian iconography. that was too much.
Again, I realise some will find it offensive, but I just wish there was some perspective here. I find a whole lot of wrestling offensive for all sorts of reasons. But this wasn't a Katie Vick angle where a championship match was being dragged through the mud thanks to allegations of necrophilia and manslaughter. Nor was it a Claire Lynch storyline- where sexual assault and drug abuse were trivialised in order to get a cheap pop (or lack of one). This was a guy who wanted to push the envelope and heat up the feud with a moment that would get people talking. It wasn't perfect by any means (I think that you can truly see that Richards and the Meanie simply do not want to be there and Tyler is waaaay too young to be out in the ring to convey any sort of real emotion) but if there were more Scott Levys willing to try their hand, wrestling would be a far more interesting place.
Because I don't think we've really got that much less offensive in the PG Era. We still marginalise and stereotype. We do offensive promos but most of them have something to do with poo dropping from somewhere or a photoshop gag where you slut-shame or call another worker fat. Raven would have considered those ideas generic and tired. And he was right.
And that's article 59! Next time it's a surprise! Yes, it's a main event on a Non WWE PPV! But what could it be? Find out next time!