Booking 101 articulates that on the biggest show of the year, your main event should consist of Biggest Heel vs Biggest Babyface for the Biggest Title. Sure, sometimes there are exceptions where there are two faces (Hogan/Warrior) or there is a truly iconic event that cannot be topped (HBK/Undertaker or Cena/Rock) but otherwise it seems like basic booking science.

WCW, on the other hand, by the end of the year 2000, had kinda gone to the trouble to ensure that Biggest Babyface and Biggest Heel of the company were incredibly difficult to place because they had either a) gone to the WWE with the promise of a real push (Benoit, Jericho, Big Show) or b) found that any potential top babyface (Goldberg, Sting, DDP) had their push cut off at the knees and was now the same as everybody else.

So who do you entrust the biggest PPV of your company to under these circumstances? Do you try and give these potential face of the company one final push in order to show that they can usher in a new age? Find a young hungry individual like a Mike Awesome and give him the title?

Or do you go for something totally weird?

Sid Vicious was no stranger to the weird and wonderful world of WCW. He began in the company in 1989 before leaving Atlanta to go to the WWE, where he managed to headline a Wrestlemania in 1992 against Hulk Hogan (despite the fact that Savage and Flair were wrestling for the title. Maybe Randy pulled on Vince's arm or something...). He then promptly left the company soon after and returned to WCW...

Where he managed to get half the locker room offside in 1993 when he was involved in an altercation with locker room favourite Arn Anderson that saw Anderson with 20 stab wounds and Vicious with four. With several wrestlers threatening to walk out of the company if Sid wasn't given his marching orders, the powers that be sent him on his way.

After a couple of years in Memphis, Sid was called back to the WWE, where he headlined another Wrestlemania (13) as the champion against the Undertaker, who defeated Sid in a match best known for the legend that grew around what happened in Sid's pants.

In 1999, however, he retuned to WCW and would win the World Heavyweight Championship in 2000. By April of 2000, it looked like Vicious was being set up for a major heel run with the title...until Bischoff and Russo pushed the reset button on the championships and stripped Vicious of his title. He was kept off TV for several months after this, before Ric Flair announced him as the #1 contender for the title at Starrcade- claiming he was as big a superstar as the Rock.

And who would he be facing? Which pillar of the wrestling community? 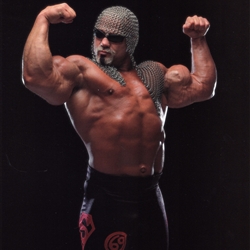 Back in the glorious innocent days of before the nWo, Scott Steiner was known with his brother Rick as being incredibly mobile big men who invented the frankensteiner- a move that by all rights should have been created by a cruiserweight. However, by the end of 1997 and early 1998, Steiner had become, erm, much bigger. He cut his hair as well and dyed it white. Gone was one half of the Steiner Brothers and in his place stood Big Poppa Pump.

And a whole lot of PR hurt came with him.

To be fair, WCW have only themselves to blame for how Steiner ended up. Instead of disciplining him whenever he shot his mouth off about Ric Flair on television; or when he assualted a EMT worker who had come into the ring to tend to kayfabe injuries of the other wrestlers in the match (Steiner claimed he thought that the worker was an actor...and so punching him would therefore be ok?); or when he threatened Terry Taylor to the point that Taylor would reschedule his flights if he knew Big Poppa Pump was on the same one, they allowed him to become the biggest heel of the company.

And he was carrying the WCW World Heavyweight Championship into Starrcade against Sid Vicious.

For once, the problem with this match...is not the match itself, but everything that came before it.

For a start, what's the deal with calling Vicious as bigger a star as the Rock? Not only is it ridiculously false, but it also reeks of insecurity. Has the Undertaker ever been compared to Goldberg on WWE TV during the Monday Night Wars? Was Steve Austin compared to Sting? As far as Vince was concerned, the locker room he needed to be concerned about was his own. But time after time WCW seemed to want to reference WWE and its workers in some delusional attempt to get its own workers over. Why not just have them win matches?

To be fair, the reason why Vicious was the #1 contender was perfectly logical. Since he was stripped for the title earlier in 2000, it was only fair that he would have a chance to defend it. However the problems came because the two guys had to hype the match. Which made working promos.

And if anyone has ever seen Sid Vicious or Scott Steiner cut a promo...you'd know that they were already up a certain creek without a certain instrument.

Straight away we weren't off to the best of starts when Vicious called out Steiner for having "a fictitious name". As opposed to the totally original and genuine name of Sid Vicious? I mean, it's one thing to call someone out for having a fictitious name when you have one too- another when you are the not even the most famous man to ever hold your epithet.

Secondly, it's not exactly a sort of idea that really gets a feud cooking like Cane Dewey or the Pipe Bomb. Now I am aware that they can't all be winners, but this is not a swing-and-a-miss, it's more attempting-to-bunt-the-ball-with-your-head sort of thing.

WCW probably realised the problem they had with these two on the microphone and so then decided to be a bit...creative hyping the match.

So for the next couple of weeks, creative had Steiner and Sid beat the piss out of everyone else and totally avoid anything to do with each other. Sid chokeslammed Oklahoma (anything to get that fucker Ferrara off my TV screen,,,) after Okie insulted Sid. Sid therefore was arrested and taken to jail for this. Steiner, apparently miffed that Sid was in jail, blamed Ric Flair for this (despite the fact that Flair hadn't sent him to jail in the first place) and so therefore clamped the Steiner Recliner onto Arn Anderson for being Ric's friend.

While on one level this did put over Steiner as a terrifying menace, it did also mean that the cast of characters for the feud were soon building up. This was shown on Thunder the same week where Steiner was to be stripped of the title until Arn Anderson came on the Turnertron to persuade Flair that it would be better if Steiner went down at Starrcade as the champion. Flair agreed, and so the title stayed on Steiner. But he also slapped a no contact clause on Steiner and Vicious- if either laid hands on the other before Starrcade, they would lose their title/title opportunity.

So what did Sid, the face of the feud do? He threatened Flair!! The guy who was just trying to restore some semblance of sanity to the friggin' promotion. He then faced Commisioner Mike Sanders on the same Nitro (because why not make this more complicated) before beating up a valet who had done nothing to him and stealing the car keys so that he could drive some cars into a circle so he could brawl with Steiner. Why not just brawl out the back?!

This was of course made worse by the fact that while Sid Vicious was acting stupid in kayfabe, Steiner was acting stupid full stop. His rage induced antics hit a new low when on the go-home Nitro (the same one as above) he cut a promo on Diamond Dallas Page which included a line about DDP having to have a sex change to have the balls to face him.

Was DDP in the main event? Nope.

Was DDP going to be involved? Nope.

All it did was antagonise one of the best workers in the locker room, who confronted Steiner and, frankly got the piss beaten out of him by a man who has massive anger issues. DDP and Kevin Nash then promptly grabbed their bags and left the building (their 'stand' lasted 6 days as they returned for Starrcade).

Now, if your title holder was a erratic loose cannon like this, surely your first instinct would be to get the belt off him. For all of Vicious' faults, he was at least a relatively sane worker by this time who had made nice with Arn Anderson and was moderately respected in the locker room. Steiner, on the other hand, represented a lot with what was wrong with WCW- a brash, arrogant worker who was getting away with murder because the company was too lazy, disorganised and/or shit-scared to do anything about it. And since it is your biggest PPV of the year, surely, surely you want to have the crowd leave happy.

One of the interesting aspects of the WWE/WCW contests is how the main events of their biggest PPVs shape up. Wrestlemania's Main Events 13, 14, 15 and 16 only had one heel going over (Triple H in 16's Fatal Four Way). Starrcade, on the other hand in the same time period had two- but both with major asterisks next to their name (Piper and Sting won, but didn't win the titles or in Sting's case, didn't hold onto it).

The match itself is often seen as ok. I think that's being a little charitable. There is a couple of moments that are frankly hilarious (at one point Vicious is put in the Steiner Recliner and he grimaces in pain for about 10 seconds before just reaching for the rope which is just there) and the match doesn't really move faster than first gear (though it allows Steiner to yell charming bon mots at the audience which are picked up by the cameras) but the real problem is that Steiner is still champion. And besides the fact that he moveset has drastically reduced from his tag team days, or his mic skills are frighteningly erratic, WCW were essentially enabling one of their most unprofessional workers by allowing him to retain their highest belt on the main event of their biggest show.

Many would say that Steiner was 'hot' at the time of this feud. But that's not really true. The sad thing is, that WCW managed to ensure that everyone else was ice cold. Sting, Goldberg, DDP; all of them were servicable men who could have carried that title, but thanks to atrocious booking, they had become yesterday's news. Not to mention the fact that new blood was always cast aside as not needed and you can understand how such a feud as this occurs. It's not so much that this was the worst option. It's what happens when you feel you've exhausted all the others.

And that's article 56! Next week it's Wrestlemania-fallout week and so to celebrate we are looking back at one of the most terrible main events in Mania history! See you then!