Where Eric Bischoff was doing his best David Letterman...

In 1998, Hulk Hogan stepped away from the championship scene after losing the WCW World Title to Goldberg in a match. While the match was stupidly held on a Nitro rather than a PPV- thus losing the company a shitload of money, there was a nice logic to the move. Hogan was able to move into a marquee tag match with Dennis Rodman against Karl Malone and Diamond Dallas Page which would have garnered a lot of mainstream press coverage, which would have taken some of the pressure off the early months of Goldberg's reign, while Hogan's ageing body could have some respite in a tag match of about 10-12 minutes in length with plenty of overbooking. That they royally fucked that bit up is neither here nor there. Still, there was a lot of mainstream attention for the match and so it wasn't long before Bischoff looked ahead to the next pay per view: Road Wild.

He liked the idea of keeping DDP and Hogan feuding, but who could he get to be the celebs? 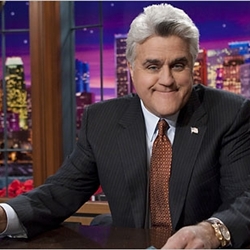 Yes, Bischoff paid Leno a massive pay cheque for their next PPV in Road Wild. Leno was a massive motorcycle fan and since the PPV was in Sturgis it seemed to fit well. Couple that with the fact that Leno's Tonight Show aimed for that Middle America as opposed to the New York orientated humour of Conan and David Letterman and there's no doubt that Bischoff thought Leno would have cut through appeal.

But that wasn't the only problem...

Y'see the fact of the matter was that Bischoff needed to draw Leno in some how. Otherwise, why the hell would Leno turn up at a motorcycle rally and wrestle Hogan? And so Bischoff constructed a $75,000 pseudo- Late Show set in order to have segments where he and Hogan could bury Leno on Nitro.

It seems odd that a man so fixated on rating as Bischoff for so long suddenly decided that the best way to turn WCW's fortunes around was to essentially jettison massive segments of the TV each and every week to two guys (Hogan and Bischoff) sitting in a Late Show segments known as nWo Nightcap.

For his part, Leno did reference the nWo a couple of times in his monologues on the Tonight Show- thus giving the event some mainstream publicity...But while this was going on, Bischoff and Hogan were shooting themselves in the foot by getting some of the loyaler fans to switch to Raw simply because they had felt insulted by the notion not only of the match taking place, but that they were willing to devote 20mins of a show to a match where half the in ring talent was not that athletically inclined.

Still, maybe the match could surprise us all.

It has to be said, the entrances for this match are not a great omen for what was to come. First its the nWo who come out- complete with Miss Elizabeth and the Disciple, though if Hogan could just get out of the way...I'd be able to make sure...It is interesting how Hogan mugs for the camera and demands it, while DDP manages to walk with Leno and make him look like an equal.

However, there is a slightly unfortunate moment where Leno is in the ring before the match starts where he's holding a plastic cup in his hand in his Tonight Show t-shirt and sweat pants pumping a fist in the air and he looks...more like a guy cheering the wrestlers rather than the in ring talent.

Now this is all not to say that I don't think that there isn't a place for this sort of match in wrestling. One of my favourite moments that I remember watching during all the wrestling I have watched was an old 6 man tag match between the New Midnight Express and Jim Cornette against the Original Midnight Express and Paul E. Dangerously, where at one point Denis Condrey of the Original Midnight Express was on the mat and totally vulnerable and Cornette tagged in and gave him a elbow drop followed by his own version of the Nature Boy strut before tagging out again. It was great because it was a moment that was plausible (the other two wrestlers had done all the work and so Cornette could take advantage) while maintaining the fact that Cornette wasn't a wrestler- he was just a guy who couldn't believe his luck.

However WCW seemed to want to portray Bischoff and Leno as having some sort of athletic prowess. And that's where things started to go bad. The announcers keep seeming to emphasise that Bischoff has a black belt in karate and Leno has been in training with DDP for the last 10 days (not realising what a dump they are taking on the whole of their mid card who trained for months at the Power Plant with that statement).

The odd thing (well, maybe not too odd for WCW) is that if you were watching the first three minutes of this match cold...you would swear the nWo team are the baby faces. It's Leno who interferes first- slapping Hogan when he's not the legal man and his bandleader Kevin Eubanks also interferes by driving Hogan into a post when he rolls out of the ring. So by the time Hogan does put on the chokehold, you kinda think...it's a little tit for tat. What's even more hilarious is when Leno rampages halfway across the ring to stop the double teaming of Page (from a legal tag transition) and thus...distracts the ref making it easier for Hogan and Bischoff to double team Page.

And frankly I feel sorry for anyone who has to sell Eric Bischoff's karate kicks. Poor DDP does his best but they look so useless and slow. DDP essentially has to stand in the corner for ages between kicks and you just want to scream at him to counter. If this was WWE2K16 the reversal button window would be available for about a minute.

And Bischoff is ok fighting DDP- a wrestler, but when Leno comes into the ring, he suddenly screams like a little girl and tags in Hogan?! What is that?! Is he fearful of big chins? And then when Hogan is tagged in, why does DDP suddenly give him a pep talk rather than just tag himself in because Jay's not a freakin' wrestler. If DDP was indisposed for the moment (like the Disciple had taken him out momentarily) and Jay was essentially a deer in the headlights- that would make sense. This doesn't.

And the poor announce team has to sell it. After the first dodge of a Hogan grapple one announcer says that Jay "has played sports". Well I've played cricket and AFL for 10 years of my life but that doesn't mean I think I could grapple with the Undertaker.

To be fair the second half of the match is a little better- as it becomes more and more overbooked and so the announcers (and the audience) throw up their hands and let it wash over them. This becomes clear when Leno's- ahem- 'punches' flatten Bischoff late in the match before Hogan tries to interfere only to clotheslined over by DDP and Kevin Eubanks hits the Diamond Cutter (and a pretty good looking one too) before Leno gets the cover.

All in all the match is pretty bad. But what really hurts this all is the feud. This is WCW using a celebrity in the absolutely wrong way because they had to change their own product to suit the feud. How does that make sense? What sort of buy rate would Road Wild 1998 have to get (considering also that there are no at the gate tickets) for this sudden major change of format (and the resulting damage it did towards much of its loyaler customers towards its company)? And that sorta sums up a lot of WCW's stunts- there was no real risk assessment behind them.

And that's article 52! Next time we turn our gaze to a match that doesn't seem like it could be that bad. I mean it's all-

What do you mean Triple H says we're fucked?! Oh well, see you next time!!