Where betrayal plagues the WWE! As well as a loss of creative logic...

So at the end of the last article (you can read the last three articles at the bottom of this page) Vince had managed to squander one of the best opportunities not only to get the whole InVasion angle back on track, but to actually make it more exciting than anyone would have thought possible by adding the wild card element of ECW. Instead, over the course of one show that potential was flushed down the can as it was revealed that not only would ECW be joining WCW in an alliance, but ECW was owned now by Stephanie McMahon.

So essentially we were back to two sides. What was worse was that one side (the WWE) was packed to the brim with headliners and top rung talent whereas the Alliance was still bereft of many of the main event talent of their respective companies- such as Sting, Goldberg and Ric Flair.

One could argue that Vince could have spent longer building up the WCW/ECW arrivals, but as said previously the fact of the matter was that Vince had little airtime to do such a thing. With the network vetoing any more wrestling programming and Vince now with approximately 30 more wrestlers on his roster, the scheduling had suddenly become very tight. Furthermore, the crowd were very resistant to see the WCW wrestlers trample all over the WWE program. They'd come to see the Undertaker and Triple H- not DDP and Rhyno.

So essentially Vince had two options. Pray that the networks change their mind soon and tread water in the mean time with an angle that could lose steam really quickly or rush the first WWE vs WCW/ECW match. Vince went with the latter decision (and if you don't believe that he rushed it, just a month earlier the InVasion PPV was supposed to be called Fully Loaded. Make of that what you will).

But there was still one problem. No one in their right mind would believe that a team made up of the cream of the WWE would lose to the Alliance. What Vince needed if this InVasion story was to continue was a traitor. Someone who would turn the whole equation on its head. Admittedly it also meant getting a WWE superstar to save WCW's bacon and essentially re-emphasise the fact that WCW is totally inferior to WWE in every way, but hey 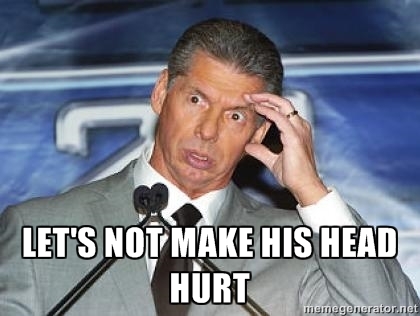 So to cut a long story short WWE creative just had to decide who would cross the divide. The Undertaker? It would be a big coup, but 'Taker was extremely loyal to WWE and a true babyface in the middle of a feud with DDP (which will be examined in a later article). Angle? He was certainly a big star but didn't have the history with ECW or WCW. And with the Rock and Triple H unavailable it came down to one man. 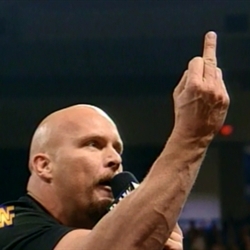 GrecoRomanGuy summed up this idea thus:

"They didn't trust anyone to be strong enough on the WCW side to be an Alliance leader, so they gave it to Stone Cold. Terrible idea. Not worth saving."

There. I just saved you a long-ass Fanpost to slog through.

But your old pal Vectron is here to dig up all those repressed memories. You're welcome.

See the thing was that Stone Cold was already a heel and doing rather nicely with the WWE Championship. Why would he change?

And so began one of the most convoluted character arcs in the history of modern pro wrestling.

It all started with Austin attempting to comfort Vince as the Invasion angle took shape by singing songs to him and generally being a sycophant that was just weird, playing Kumbya and We are the Champions for Vince to perk him up from his sorrowful moods. Vince however, naturally, was more concerned with the fact that there was all these wrestlers threatening to ruin him and so the notion of one of his marquee players suddenly being all sensitive was not something he really thought would help him in the war to come.

Later that same night (July 12) Vince told Austin to come to the ring. He said that the WWE needed the old Austin-the foul mouthed SOB and demanded that Austin knock him down. Austin however turned his back on Vince and left the ring- leaving his WWE teamates to be overwhelmed by the Alliance later that night.

If all this had taken place over the course of a few weeks it may have made some sense. As it was though, the audience barely had a chance to acknowledge that Austin was acting oddly before Vince told him to stop and then he walked off.

On the July 16 edition of Raw, which was the go home show for the InVasion, Austin was seen playing pool at a bar. However, later that night as the WWE are once again being overwhelmed by the Alliance, Austin runs in and makes the save, thus cementing himself as captain of team WWE against the Alliance forces.

"Yay!!" We thought, "Finally, the Monday Night Wars' leading warrior is not acting like a pussy and is back where he belongs- kicking ass for the WWE!"

Which lasted all of 6 days.

Which brought us to the inaugural brawl at the InVasion PPV- Stone Cold, Kurt Angle, Chris Jericho and the Brothers of Destruction vs Booker T, DDP, Rhyno and the Dudleys.

As an aside, when I watched this back, all I could think of looking back over the promo video was "Why couldn't Shane and Stephanie let Paul do the freakin' talking?" Everytime Paul Heyman seemed to get on a roll and seemed to be getting to cut a great promo you'd hear Stephanie whining over the top of him, or Shane then bringing the mood down with a solid, but unspectacular promo.

Anyway, back to the match.

I have to say that the presentation of the set is actually really good- with the Alliance coming down from the left and the WWE coming from the right. I kinda wish more thought went into set design like this these days. The crowd is also seriously hot.

The announcing on the other hand is um...interesting- going from "really biased" (totally no-selling the abilities of the Alliance wrestlers) to "really illogical" (when it's not burying WCW or ECW of course). At more than one point Booker T is labelled a "sellout" for siding with WCW by JR. That's right, shame on you Booker T for selling out to WCW by...remaining loyal?

Another hilarious moment comes when Michael Cole asks JR what happens if the Alliance wins this match- to which JR replies (trying to sound deep and meaningful) that "it is a question I cannot answer" but which in fact actually only emphases the fact that there is no damn stakes to this match! What are the Alliance fighting for? Why not put in a kayfabe stipulation in so that this brawl actually means something. If I am a general, why the fuck am I leading my troops to conquer a hill that has no strategic value. Shouldn't I marshal my forces to take a city or a town?

But then we get to the match and it is a bit...formulaic. It's essentially Team WWE beating the ever loving shit out of the Alliance wrestlers, trying to get covers until one of the other Alliance members breaks it up- essentially implying that while we WWE wrestlers can get out of their regular moves by ourselves, them ordinary WCW/ECW wrestlers need help (even at the end of the match, when the WWE start to break up pins, they casually saunter in as opposed to the frantic diving of the Alliance). Occasionally this is broken up by a underhand move by the Alliance (to the outrage of JR, who seems to mysteriously forgotten the fact that it's a NO DQ match) who gain the ascendancy for a little while before the WWE member in question hits a big move and gets a hot tag. Then it's rinse and repeat. Even the crowd, who is white hot at the start of this is not exactly bored, is a bit...de-energised.

Until the overbooked mess at the end, of course.

I'm not going to go through the whole schmozzle of the last few minutes. Suffice to say Kurt Angle had Booker in the Ankle Lock before Austin interfered and gave Angle the Stunner, costing Angle and Team WWE the match. Now, you would think this would be a hot angle, right?

The thing is, the crowd doesn't react as "That bastard Austin has turned his back on the WWE!!! How dare he!! Booo!!"

I think this is due to a couple of reasons.

Firstly, I don't really think the fans are prepared to swallow the fact that Austin fought tooth and nail for the WWE for about 25 minutes and then decided to flip the bird. That in itself is odd. Secondly, and more importantly, what the crowd wanted was the old Austin back...and despite the fact he was on Team Alliance now, he wasn't playing guitar, he was swilling beers and handing out Stunners left and right.

Y'see what WWE didn't want to face up to is that Austin is essentially a baby face acting like a heel. He always has been. They even tried having him switch heel by allying him with Vince McMahon- his sworn enemy- and that was a bust because, dammit we want to like the guy. And so they had to neuter more and more about what made Stone Cold so compelling until he really was annoying. But the thing is, when you bring that back, even if it is for a swerve, fans will clamour to it.

All of this shows the real stupidity of the InVasion angle. Because Vince was so rushed to do something, he had to push the Alliance and WWE as two different teams- therefore by default making a baby face team and a heel team. Of course, in doing that, some wrestler's characters would be wrong footed, as they would be square pegs that needed to fit in new round holes. The sad thing about this was that one of the square pegs was Austin himself. While the Rock managed to miss some of the early InVasion stuff and therefore not get caught out, this angle culminating in the InVasion PPV, probably spelt the death knell of Austin as the top baby face of the company simply because he would never quite be on the level of the Rock again.

Furthermore, this turn also showed that the ex-WCW/ECW guys could not be trusted to be the face of their own inVasion. Even the reason Austin gave for turning seemed somewhat insulting- claiming that he felt under appreciated with Angle and the Rock competing with him as top guy. One could easily translate that to mean "Look, over there I felt like there was a lot of dudes who were around my level and so I didn't get as much attention as I wanted, but you guys and your car wreck of a team really need me so I'm expecting some world class fawning!"

And that's Part 4. Next time we focus in on yards and dogs.