In which our hero succeeds in firing the authority; I mean getting fired by the authority; Sorry, being Intercontinental Champion; what I mean is challenging for the IC Championship

Boy this is hard!

At the beginning of 2014, Ziggler was concussed by Ryback.

I just thought I'd get that out of the way as an omen to show that this year didn't seem to be any better than the year before. Indeed, while Dolph Ziggler made an appearance at the Royal Rumble match and in the 30-man Battle Royal at Wrestlemania he was notably absent from big PPV matches in the beginning of the year. He then participated in the Money in the Bank match at Money in the Bank but was defeated of course by the new golden boy of the Authority Seth Rollins (more on him later...). At Battleground he was the runner-up in a Battle Royal to crown a new Intercontinental Champion after being eliminated by the Miz but at Summerslam finally, FINALLY Dolph Ziggler had gold back around his waist after beating the Miz for the IC title.

Which he then lost at Night of Champions only to get it back the next night on Raw.

Still, Ziggler did try to make the best out of it and at Hell in a Cell had a good match with Cesaro for the title where he retained.

And yet it only took one handshake from this man 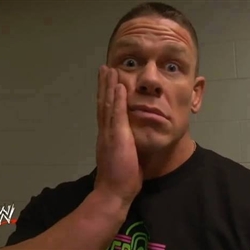 to turn it all to Hell.

Y'see while this was all going on Cena was embroiled in a boneheaded feud with the Authority in a role that was obviously earmarked for one D. Bryan. The asinine thing about that though was when Bryan was laid low with injury, they simply thought they could slot Cena in and it would all be good.

For a start, the Authority's reasoning for feuding with Cena seemed to be...vague at best. Because he wasn't allied with Hunter and Stephanie there seemed to be a concerted effort to ensure that he wasn't WWE Champion.

This would have made more sense if a) they weren't so obsessed with pointing out how much Cena obviously was "best for business" and thus the notion of being spiteful towards him was...a little odd and b) the fact that the motherfucking champion wasn't going to be anywhere near the ring until the Royal Rumble!!!

I am sorry, but it really shits me that the best that the WWE could do in the months when Brock walked away with his belt was set up a half arsed feud between John Cena and the Authority, You can't have a babyface who apparently is the scourge of the authority but seems to be placed in PPV Main Events and gets #1 contender matches in spite of the fact that he actually lost the match to qualify for the main event of a PPV.

You know who really should have been the one with the cross hairs. This guy: 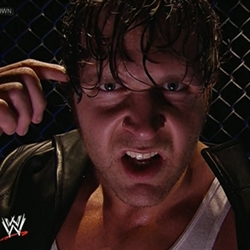 Ambrose was the guy that everyone in the WWE wanted to get behind at the time of Brock's absence from WWE and he had a bone to pick with that little weasel Rollins, So what did WWE do? Try to claim that somehow Cena had equal beef by the fact that he had interrupted a title match.

That's like comparing Anakin Skywalker's fall to the Dark Side with a baby crying cause his rattle was stolen. But it didn't stop Ambrose getting shunted sideways into a feud with Bray Wyatt that did little for either man (I sincerely think that those two will tangle at a Wrestlemania one day) while Mr Rebel-Without-a-Cause himself John Cena squared off against the Authority.

And the Authority had already come to the conclusion that Cena and Ziggler were on the same page.

Thus Ziggler's run with the Intercontinental Title was cut short as he was beaten (with help) by Luke Harper. However, Ziggler continued to be part of Team Cena against Team Authority. If his team won- the Authority was finished. But if Team Authority won Ziggler was fired.

It isn't really enough here to say that Ziggler outlasted Harper, Kane, Rollins and the antics of the Authority. It should have been his crowning achievement. Survivor Series 2014 should have been talked about for Ziggler's amazing efforts as well as the Stinger's debut. Not to mention the fact that finally, finally the WWE could move on from this whole Authority angle that had been going on since Summerslam of 2013.

Of course it lasted for just over a month before the Authority returned and fired every one on Team Cena that wasn't named John Cena. Luckily 2 weeks later Cena managed to win their jobs back with the assistance of Sting. While it did manage to roll along the Cena/Authority and Triple H/Sting storylines it also came with the unfortunate side effect of rendering Ziggler back to irrelevancy.

I mean, he out lasted Harper, Rollins and Kane and was the freaking hero of Survivor Series. That should have been easy to transform into some real momentum. Instead because Mr Cena had nothing to do and the WWE didn't know what to do after the ending of the Authority Ziggler found his legs cut out from under him once again. Not only that, but he went from being "hero of Survivor Series" to "person who now owes John Cena his job". That difference of character does little to put someone over as a bad-ass.

And they didn't even make him out as different! They could have pumped him up as the hero of Survivor Series or the man who vanquished the Authority. And when the Authority came back, they could have been scared of him. Rollins may have avoided Ziggler at all costs. You should have had babyfaces coming up to him after the Authority was fired and thanking him and heels (particularly Kane, Big Show, J&J etc.) trying to beat the shit out of him only to find random babyfaces coming down the aisle for the save.

Not for nothing, but this gets frustrating after a while...

I'm actually not going to talk much about the Royal Rumble because that in itself is a future HSDoW, but suffice to say Ziggler once again found himself an after thought from the main story of the Authority and the one babyface that could bring Balance to the Force. It just happened to be Reigns instead of Cena. Likewise at Fastlane Ziggler found himself (along with Rowan and Ryback) on the losing side of a 6-Man Tag Match against the Authority because Randy Orton was coming back and Orton had to look great chasing off Rollins.

I said in the previous article that Dolph sucked as a babyface. Looking back at this period of his career (late 2013-early 2014), I realise I may have been a little harsh. Because despite the fact that creative didn't give a toss about him over the notion that he was to fling around for the Big Show in order to make him seem like he really was a formidable monster and not an over the hill worker that was somehow getting to the Final 4 (again, future article), people dreamed of a day when he could strut his stuff and show that he was a truly terrific wrestler that didn't need massive soap opery storylines to succeed as a babyface or a heel. He was good enough on his own. He just didn't need women around to make him look like a sleazy prick. 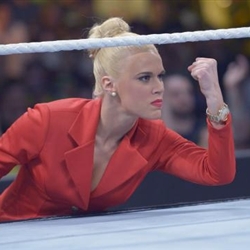 But what would I know...