Where imitation may have not been the most sincere form of flattery...

So after we left off last time, Sandow had essentially been cast off to the scrap heap with nary a care of where he was going to end up next. The fact that he couldn't finish off Cena despite the fact that Cena had a totally useless arm was not lost on smarks who wondered if Sandow could truly recover from being shat on from such a tall height.

And for a while it looked like this may be the outcome, with only an unsuccessful IC Title Match against Big E Langston at TLC standing out as anything like a highlight. From Late January to May 20 2014, in fact, Sandow did not win a match. Not one.

So what changed? What saviour came to rescue Sandow from the depths of indifference? 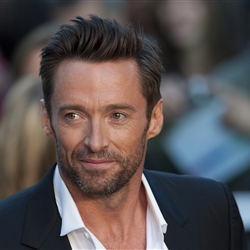 Can we get him back to rehab Rusev?

Yes, Hugh Jackman was hosting Raw on the 28th April 2014 and in a segment with the Showoff Dolph Ziggler, was interrupted by Sandow dressed as Magneto. At the time it seemed like another way of just ridiculing Sandow. But here's the curious thing about WWE as opposed to many other wrestling companies. While winning prominent matches and being involved in good angles are no doubt the best way to get a push, sometimes getting on TV is enough because it reminds creative of what you can do, and possibly opens up other ideas of how creative can utilise you.

Sandow therefore began appearing on subsequent episodes on Raw dressed as all sorts of characters- including Sherlock Holmes, Bret Hart, Vince McMahon, Bruce Springsteen and Abe Lincoln. All of this seemed like nice entertainment bits that weren't really going to send Sandow anywhere except being pushed as the next Santino Marella. But then fortune seemed to smile on Sandow again through this man. 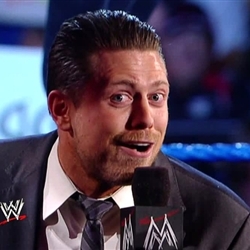 There are some people who are just born heels. They could rescue a baby from a burning house, before donating a cheque to a charity and then manage to sing a beautiful ballad and they would still be booed out of the building. The marks will hate them because they just seem like naturally obnoxious characters; the smarks will hate them because they don't have the wrestling pedigree for the smarks to appreciate their work. In this way, they often don't have to work to become heels compared to guys such as Chris Jericho and CM Punk- simply because the smarks want to boo them. Eva Marie is a great example of this. Nobody wants to like her. The Miz is another.

And so when the Miz was on one of his 'movie star' ego trips, he began employing Damien Sandow as his entourage/ body double. As a partnership it was a good match for Damien Sandow- as he could show off his comedy chops and he actually won the Tag Team Championship with Miz- with the fan support he was getting becoming obvious as the crowd would boo Miz and cheer Mizdow. At the same time, everyone was waiting, waiting for the moment that the entitled little prick would piss Sandow off too much and Sandow would cave his weasely face in on his way to getting a renewed midcard push.

Was that too much to ask?

In actuality, the WWE definately wanted the feud to happen...they just waited for ages. Miz and Mizdow (as he was called then) lost the Tag Team belts on the December 29th episode of Raw. It wasn't until Wrestlemania that Mizdow actually gave Miz any sort of comeuppance- in the Andre the Giant Battle Royal pre-show!! I mean, if you're going to build a moment for three fucking months, at least stick on the main show and not as some smelly afterthought. And by that time, the crowd were exhausted by Sandow's conflicted sort of feelings. The guy was treating Sandow like dirt and it took him three months to say "Hey, I don't need this shit"?

Secondly if you put the angle earlier, you could have actually given them a match. Instead they were essentially left as an afterthought post-Wrestlemania where they traded wins back and forth unitl Sandow challenged Miz for a match for the rights to the Miz brand.

That's right. Instead of challenging for his independence he wanted to challenge for the other guy's gimmick.

There didn't need to be any sort of stipulation like that. Miz's pride was hurt, and Sandow wanted to establish that he could be ok without the Miz. That's what the story should have been. Instead we had Sandow wanting to be the Miz?! We didn't cheer him because he was the Miz!! We cheered him because he was very good at imitating who we all thought was a smarmy prick!

And then he lost the goddamn feud! The Miz rolled on, and Sandow...was hung out to dry. We cheered him on; we wanted him to do well, and instead they just ripped the rug from under him. Again. And it's not as if Miz can't afford to lose the odd feud- he lost to Alex Riley.

This feud had so much potential. You could have had something happen at the Rumble (maybe Miz blames Mizdow for his elimination, or Mizdow does a lot better than he does) and Miz beats the shit out of him the next night to teach him a lesson. You could then make a match for Fast Lane (replace the Goldust/Stardust match- that was rushed anyway) which Sandow wins. Put them both then in the Battle Royale at Wrestlemania, and have Miz chuck out Sandow, before having a rubber match at Extreme Rules with some sort of stipulation (say Falls Count Anywhere) which Sandow wins. He would then move back into the midcard shuffle to challenge for the midcard titles or you could even hook him up with another good wrestler with little to do and form a tag team.

Instead he became Macho Mandow and teamed up with Curtis Axel's Hulk Hogan to form the Meta Powers...until the real Hogan messed that whole thing up.

Sandow is not Santino Marella. And yet, someone in the backrooms of the WWE obviously think that there's not a lot more too him. And there's the tragedy. He took a pretentious gimmick that could have fallen flat on its face and made it his own. And all WWE have done since is run away from that idea by lumping him with all sorts of other notions and quirks. I laughed at Damien Mizdow. But I miss appreciating Damien Sandow.

And that's article 51! Next time, we're back to one parters as we go across to Atlanta to see one of the most ludicrously indulgent tag team matches ever booked. See you next time!

#51 The Rise and Fall of Damien Sandow/Mizdow Part One