Last night I went to NXT's live event in Asbury Park, and this morning I got to meet my favorite wrestler in the world. And Finn Bálor, too. So, I figured I'd pen up a post about those two events.

Asuka def. Alexa Bliss: Crowd was pretty hot for Asuka after her music hit and as she came down to the ropes. She definitely has this whole thing locked down and it's pretty great to see. With the way things going I may soon find myself rooting against her but... yeah. Anyways, Alexa's music hit and she got a pretty hearty pop from the crowd after 'BLISS' showed up on the minitron. She knows how to work a card. This was a pretty solid opener. Nothing too ambitious. Asuka won with the Asuka Lock and the finish was... sorta awkward? I don't know. For whatever reason the bell didn't ring immediately. Anyways, good start.

Apollo Crews def. Alex Riley: Imagine being excited about going to #NXTAsburyPark, excited about seeing what you think will be a good show... and then seeing Alex Riley. Geez, his theme music is so terrible. Asbury Park didn't really take a liking to him, though there were crowd chants in his support. I think they might have been ironic though. I hope. "YOU STILL SUCK!" chants followed that though so I'm guessing yes. This was pretty passable. Crews won with his spin-out powerbomb.

Carmella def. Peyton Royce: Carmella did her usual thing, and started off by saying she was the Princess of Staten Island. Naturally, that didn't go over too well with the Garden State crowd. Being who she is tho, 'The Most Fabulous Diva' quickly changed course and suggested she'd be 'The Princess of New Jersey.' That got a pop. Imagine my surprise next when Peyton Royce showed up. This was a pretty fun contest. Carmella taunted Peyton with her precious flower and Peyton comically pouted in the middle of the ring during the match while her opponent had her flower. Carmella won via the Koji Clutch she'd been starting to use.

Enzo & Cass def. The Vaudevillains: As you might expect, 'Zo and Cass got a huge pop as they came to the ring. Enzo debuted (?) a new jersey with the number '0' on the back with 'DIMES.' Seems like they're going to run with that unless it was just customwear. 'Smack Talk Skywalker' went on about his memories in Jersey, on the Jersey Shore, etc. Then they made a reference to Bruce Springsteen saying they were 'Born to Run.' 'BRUUUUUCE' chants rung out and Enzo said he first thought they were boos and quickly realized it was a 'BRUUUUUCE' chant.

They then made a few more references and then made a Frankie Valli & The Four Seasons reference, saying they were a couple of 'Jersey Boys.' Cass then sung the opening lick to 'Sherry Baby' which got a huge pop and a bit of a singalong happened. Enzo hilariously said afterwards, "I don't think there's any doubt. Sherry's coming out tonight."

Then there was a match! This was the best MOTN to this point in time with a few close near falls. Enzo and Cass won with "Air Enzo."

Austin Aries def. Elias Samson: After a brief intermission we were back to it. Samson came out and, boy, I feel sorry for him. Crowd wasn't feeling him. Doused with heat. To his credit, he played it off and made a couple jabs at Asbury (referencing it as 'Ass-bury' ha ha ha) before Aries came out to a good pop. For whatever dumb reason, the crowd started dueling Cena chants, which made me angry. Take that sh*t to RAW. Anyways, this was decent and you could tell Aries was on a different level than Samson. Went on for a bit, but eventually Aries won the match.

Bayley def. Eva Marie to retain the NXT Women's Championship: Eva gets molten level heat. As you might expect. Then a 'You can't wrestle/She's still hot' chant dueled, which... what a stupid chant.

Bayley then came out to a big pop as one might expect. Tube men: over, as they got a big pop as well. For whatever reason, a 'We want Sasha' was started up soon after this... which, again, take these dumb chants to RAW and SmackDown! folks. Please. Moreover, there was a random 'SUPER DRAGON' chant. The crowd decided during this match that they'd be stupid. None of the usual Bayley chants/sing songs could get started. Instead it was just heat on Eva (Which, one critique I have of her is that she is so damn adamant for some reason to taunt after almost every one of her moves. Slow it down) and stupid chants. But I guess that's what happens when you book Eva against Bayley. I wish it was like #NXTPhilly, where Bayley faced Bliss.

Bayls did her usual best and the match ended with a Bayley-to-Belly. She hilariously yucked it up and did Eva's air guitar and blew her a few kisses to the crowd's delight. She went around to hug a few lucky folks at ringside and even the referee, too.

Finn Bálor & Sami Zayn def. Baron Corbin & Samoa Joe: This was a very fun way to end the show. All four got very respectable reactions from the crowd with Finn getting the loudest of the bunch. The OLÉ chant is so fun to do at a live show. Match went on for quite a while. Sami hit Joe with a Helluva Kick while he was on the apron and he walked into Deep Six, which turned into a near fall. Finn got a blind tag on Zayn and came in and hit Bloody Sunday on Corbin for the win.

After the show was over Finn and Sami traded outfits with Sami rocking the leather jacket and title while Finn rocked the fleece and Kangol hat.

Riley showing up and stupid crowd chants aside, this was a very good show.

So then this morning came around. As some may know I'm a big time Bayley fan so when I heard the news that Bayley and Finn were coming to Freehold, New Jersey, I simply couldn't resist. So this morning, low sleep be damned, I made my way down to iPlayAmerica to meet her. And Finn, too.

We got there and the line was predictably pretty long. Having shelled out the $80 for VIP (how could I not?) I was able to get moved in pretty quickly.

After about an hour and a half in total of waiting (counting getting there was the doors were about to open around 9 a.m. to about 10:30 a.m) I was finally set to meet my favorite wrestler ever.

And I was just speechless.

I was so starstruck that I barely said anything at all during the few moments that I got. I had thought over scenarios in my head leading up to this, thinking the situation out and what I was gonna say and just... nothing came out.

I was rocking my 'I'm a Hugger' shirt so when Bayley saw me timidly making my way over, she jokingly was all, "C'mon, c'mon" and after quickening my pace she gave me a hug.

Woo. That was so great.

I did the whole 'Too Sweet' thing with Finn and since I still wasn't saying all that much - I was just in legit AWE - Bayley was all 'Are you just doing the picture?' and I was just, "...Yeah." The picture was then taken and I graciously thanked them both, got my Bayley action figure and copy of WWE 2K16 signed, two pre-signed photos and one heck of a memory. 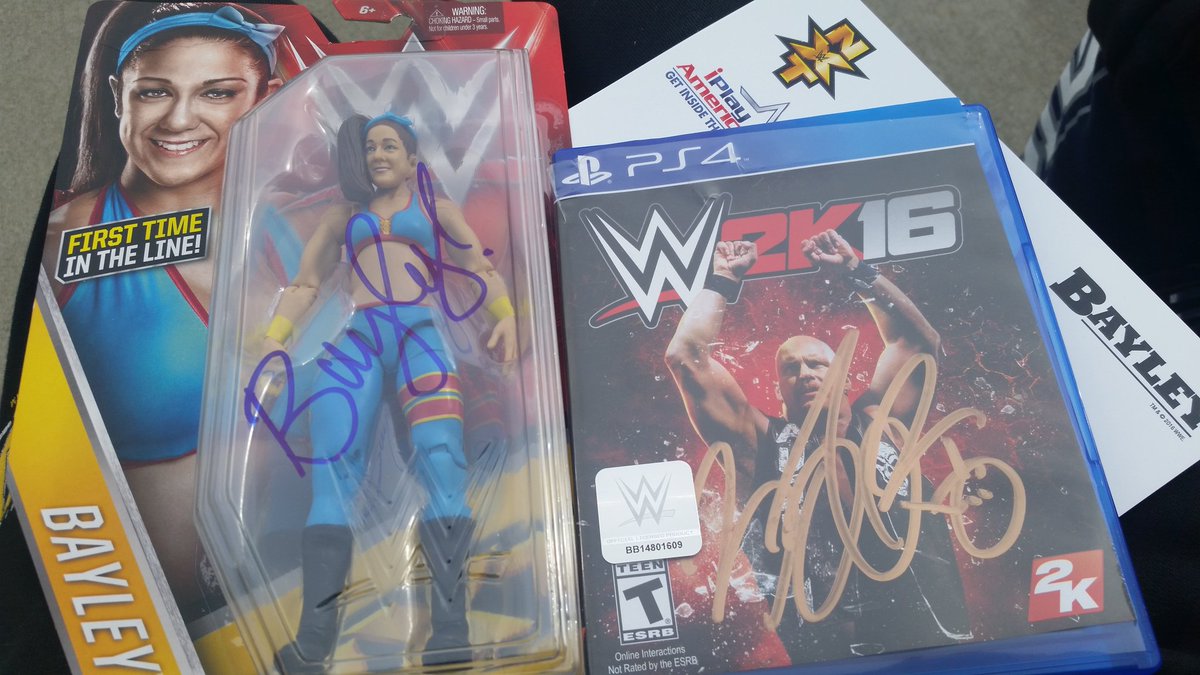 It all ended around 10:40 a.m. ET, so the 15 hours and 10 minutes spent reminded me of why I'm sometimes so happy and proud to be a wrestling fan (aside from those dumb crowd chants). What a time.