Seems to be a few unwashed masses in WWE Creative...

Nobody likes to be patronised to.

We all like to think of ourselves as pretty stable individuals who have a good handle on our lives. Sure, we listen to our friends when they have advice and such, but nobody likes to be browbeaten as if they were 5 again.

Which is what made the following man so compelling as a heel. 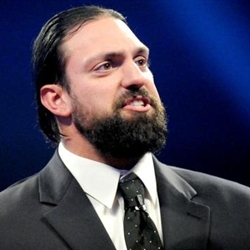 There is something wonderful about seeing an old school promo strut his stuff, and there were few more heels that were as old school as Damien Sandow in early 2012. Patronising and dismissive towards the audience, he would walk out on matches that he claimed were beneath him- citing that the crowd would not learn anything from them. He claimed to be the "Intellectual Saviour of the Unwashed Masses" and would come out to Handel's Hallelujah chorus for fuck's sake! And if that wasn't enough, he then teamed up with Cody Rhodes to form the Rhodes Scholars (a quite clever name) that would turn up on TV randomly and essentially act snobbish and snide towards all sorts of wrestlers.

In essence they were a fun, midcard act. Nobody expected them to suddenly become the Shield or the Wyatt Family, but when you're booking 5 hours of prime time television each week, such talent is gold.

Indeed, it looked like Sandow and Rhodes had a fruitful career in front of them in the midcard, but fate (well, creative anyway had other plans and soon slapped the WHC Money in the Bank Briefcase on Damien Sandow.

Even today looking back it seemed like a surprising choice. You had Jack Swagger, Antonio Cesaro, Wade Barrett, Dean Ambrose, Cody Rhodes and Fandango all in the match- all of which had won some sort of title. Sandow was certainly a good mid card worker, but when it came to name opponents, all of the others had major feuds with big names. Sandow, on the other hand, was still somewhat lacking.

Having said that, at the time it was also seen as an interesting choice that could take the WWE forward. After all, there was no doubt that Sandow could talk on the mic and he could certainly work. Not to mention he had a ready-made feud for him in Cody Rhodes. What could possibly go wrong?

Well, for a start that beautiful briefcase soon turned out to be holding not so much a dream as a nightmare of Edvard Munchian proportions.

For a start, like so many Money in the Bank holders of the past, Sandow was essentially booked into the ground as Creative had him losing match after match- no doubt with the justification that "hey, he's only one pin from winning the world title- he can afford a loss or two!"

The trouble is with this notion is that soon one loss becomes two, which becomes four and the guy who once looked like a viable challenger for the belt is now just some schmuck holding a briefcase in the cold. And that leads to poor audience acceptance and bad Word Title runs. Which leads to Creative shrugging their shoulders and saying, "Well, we tried with Wrestler X by giving him the Money In the Bank contract, but when he got the belt, he just wasn't a compelling champion".

Really guys? I wonder why?

This wasn't helped by the fact that Sandow suddenly went from having a fixed (albeit minimal) set of offensive manoeuvres to suddenly trying to introduce seemingly 5 different finishers that he was forever tinkering with. At first there was the Elbow of Disdain and the Terminus Neckbreaker. Then came the Silencer Slam move, and the Modified Sharpshooter, and that modified Rock Bottom until even the announcers were having trouble keeping up with what Sandow was doing to win matches. If any of these finishers were properly put over it may have made a difference, but instead it made Sandow look indecisive. When Undertaker does his throat slash, you know the Tombstone is coming. When Bray Wyatt heads to the corner and bends over backwards, Sister Abigail isn't far away. Yes, there is an element of predictability about that, but it also allows the fans to mark out. Without this, Sandow seemed to lack something that made a World Title Run seem plausible.

But though Sandow was fed to the likes of Cody Rhodes and Dolph Ziggler, many fans held out hope that at least at some point he would get a run with the World Heavyweight Championship.

Of course, they hadn't banked on this guy: 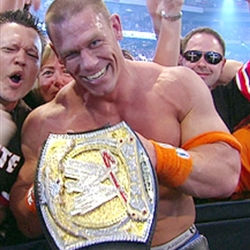 Y'see, after losing the WWE Title to Daniel Bryan Cena took a couple of months off rehabbing an arm injury before walking back into a successful World Heavyweight Title Match at Hell in Cell with Alberto Del RIo (because you can do that sort of thing when you're John Cena). The next night on Raw John Cena came to the ring with his World Title, did his usual schtick about coming back against the odds, thanking the fans and "the Champ is here!!!" before Damien Sandow comes out.

Now before we get on to the bad part of this segment, I want to talk about the good. Because the good is actually quite good indeed. Damien Sandow walks to the ring, stands toe to toe with Cena and essentially tells him that triceps injury of his can't be 100% healed and what with the cross arm breaker that Del Rio slapped on it the night before during their title match it must be hurting bad. He claims Cena is only out here pretending to be fully fit in order for Sandow not to cash in on him. Sandow then shapes to leave before targeting Cena's arm and giving Cena a massive beatdown (at one point screaming "Rise above this" before ramming Cena's arm into the barricade). It was great storytelling that played off Cena's pride and ego and made Sandow seem like an intellectual heel that could identify weaknesses and exploit them.

And then it all went to Hell.

Put it this way- during the match Jerry Lawler actually says "John Cena is Superman!" Despite the beating he took before the match on his bad arm, Sandow's finisher, plenty of other offense and still managed to win. Why? Because he's Cena, that's why.

Furthermore, I have no doubt that Creative knew that there was only going to be one title soon enough and so they wanted to get the heat off Sandow's cash in out of the way as soon as possible because they had painted themselves into a corner and damn well knew it. And if you don't believe me, you can tell by the commentary, which instead of trying to call Sandow out as vicious and downright underhand, is being totally fucking condescending to him. Michael Cole- supposedly the 'face' play-by-play' says "you can take nothing away from that young man- he did everything in his power to take that championship away from John Cena" (er, isn't that why he's the bad guy?). I have no doubt that this is because somewhere in Gorilla position VInce was having a rare crisis of conscience knowing that he had for all intents and purposes buried a talent for being in the wrong place at the wrong time because God forbid, we couldn't have Cena losing even if he had his arm smacked several times with a briefcase and chair after being submitted to an fucking arm bar the night before.

You know what would have made more sense? Give Sandow the damn title. No, really. Have Cena try to compete for a while but after say, 12 minutes the Doctor calls it. Cena tries to resist, but he's too beat up and Sandow wins by forfeit and gets the Title.

Have Cena stay around on TV (so your ratings don't fade) but just say that the Doctors won't clear him for competition. At the same time, Sandow can gloat about being the new World Champion. At Survivor Series you do a Triple Threat- Cena; whose arm is finally mended vs Del Rio vs Sandow. Sandow flukes a win (maybe he takes a page out of CM Punk's book and tosses Cena out of the ring after he AA's Del Rio) and retains.

However, nobody really treats him like a Champion. Everyone is disdainful of him and think that he's not up to much. So he decides to put it on the line against Cena at TLC in a normal match (we'll give Orton someone to feud with in the meantime- say Punk). Everyone thinks this will be over in about 10 minutes, but Sandow surprises everyone. What's more, he doesn't resort to cheap heel tactics. He legitimately wrestles Cena and frustrates Cena a little by kicking out of some big moves. However Cena eventually wins, and shakes Sandow's hand at the end of it.

This way, you only get one Cena/Orton match and you can save Title Unification for the Rumble where it should be a big deal. What's more you have a nice upper mid carder who would be ideally placed to start feuding for the US or the Intercontinental Title and add a bit more colour to the mid card.

What they did instead will not surprise you...