Odd couple tag teams are a staple of North American wrestling. From partners with a grudge like Chris Candido and Lance Storm in ECW to size and style change-ups like Decay in TNA to thrown-together squads that click like Heath Slater and Rhyno on SmackDown, any two people can revitalize a tag team division. In Virginia, the same rule applies with the state's top team on the independent scene – "Innocent" Isaiah Santero and "The Beau Show" Beau Crockett, collectively The Cutie And The Beast.

One year ago, CWF Mid-Atlantic Wrestling (the spiritual successor to the Carolinas territory of old) held a Battlebowl. Crockett, a 230-pound compact powerhouse, was hoping to make an impact as he had in Virginia's micro-indy system. He wasn't prepared to be paired up with Santero, the lightest member of the roster. He really wasn't prepared for Santero's reaction.

"I was smitten," Santero admits (all statements from the wrestlers are in character). "I still am."

The first match ended badly. Although Crockett and Santero individually were able to hold their own, their teamwork left a lot to be desired. Santero in particular showed signs of immaturity, getting caught fawning over his partner rather than focusing on the match. Eventually, Santero could hold it in no more and kissed Crockett. The self-made distraction was their undoing, and their first match ended in a loss.

Despite the early setback and the break of decorum, Crockett gave Santero another chance. It wound up being the best thing he did, as the duo began to go on a winning streak. Each man's strengths played well for the team: Santero could take all sorts of damage and not stay down, while Crockett had an effective blitz sequence of attacks once he got in. So while their matches had a predictable pattern – Santero would get hurt, have to stay alive, and eventually tag in Crockett to clean house – there was no arguing with success.

There was, however, some arguing with their personal dynamic. Neither man was really where they wanted the relationship to be. On the one hand, Crockett wanted Santero to remain professional. On the other, Santero was hoping Crockett would reciprocate his feelings. Instead, they remain a tag team, successful around the Mid-Atlantic, and an uneasy partnership.

On July 1, the duo went to the site of their biggest successes, the nascent indy Northern Virginia Pro Wrestling. NVPW, an offshoot of the Carolinas with some CZW influence, had put them against Brandon "Money" Greene, a rich man with dirty brawling tactics, and Rayo, his reluctant understudy. But before the match, Greene tried to exploit what he thought was the tension between the two.

"We all know the reason this team is successful is you, Beau," he exhorted on the house microphone. "So I'm offering you a chance to be bigger than you ever have before. I have here a stack of money in this envelope. I'll give it to you if you break up the team with Isaiah, and we can go straight to the top!"

Before Crockett could answer, Santero snatched the mic from Greene's hands. "Oh, HECK no!" Santero declared. This wasn't just about the success they had together. In the months of teaming, they'd formed a bond no money could break. They weren't just friends, Santero declared; they were partners.

This is nothing new; Crockett has made it publicly clear that everything is professional. He recoils when Santero blind tags – though in his defense, the tag is usually a goose more than a slap on the back. He doesn't return the celebratory hugs Santero gives him. He insists the team be introduced as hailing from "two very different locations". Their most famous publicity photo was taken 2 seconds after Santero leaped into an unprepared and stunned Crockett's arms, as seen here: 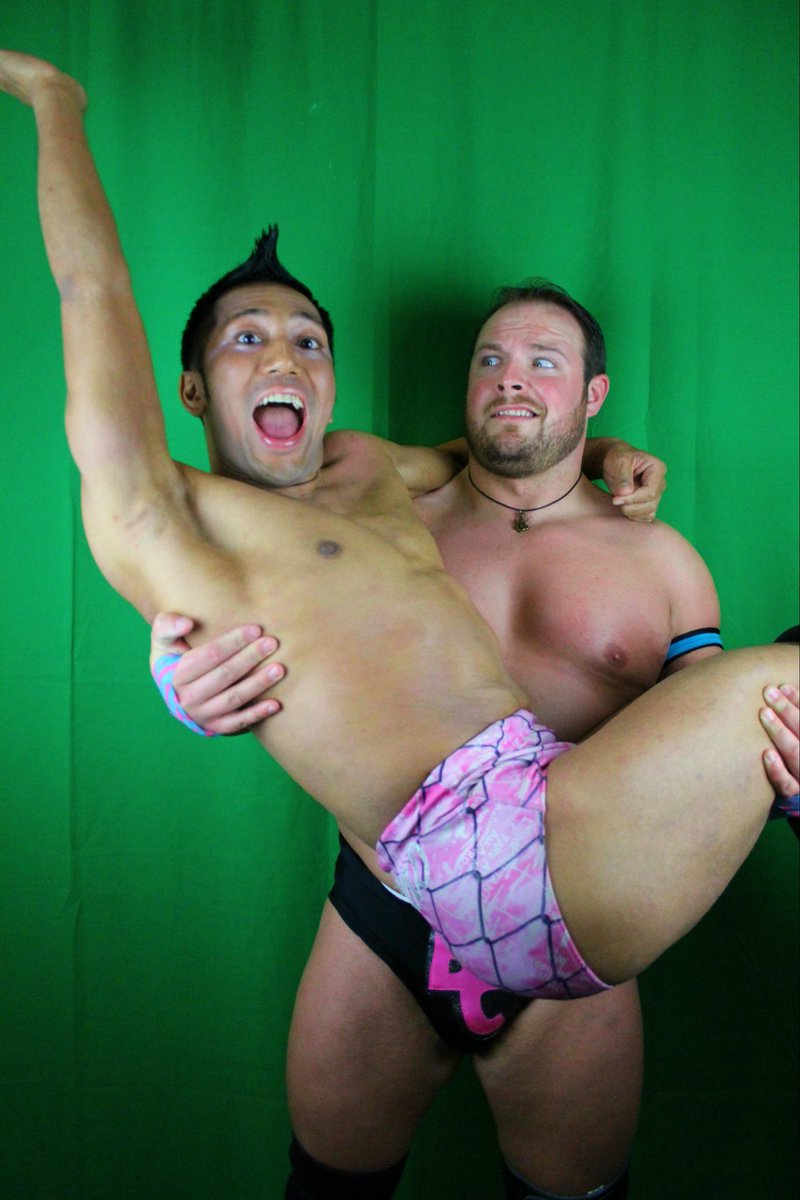 On that July Friday night, Crockett would confirm it. He told Greene that he enjoyed the tag team, and it would take a lot more than Greene was offering to break it up. "Sorry, Money, but this envelope feels a little light for betraying a friend."

Unfortunately, Greene had a Plan B: the Storm of Entrails, Dan O'Hare and Shlak, were waiting to jump Cutie and the Beast from behind. It took a save from the Sammich Squad – Carolinas tag champions Aaron Biggs and the Mecha Mercenary – to even up the sides. A 2 on 2 match became 4 on 4.

The alliance with the tag champs was nothing new. They'd been part of 8-man tags before. So with the two teams on good terms, why not a title match? "Well, there have been times when we haven't been on the same page," Crockett explained. "There have been matches where I've needed something to defend myself, and I grabbed one of their belts. They got the wrong idea. I think we'll wait until things smooth over before we ask."

But on this night, there was no confusion. NVPW doesn't have its own titles, so the champs left their belts in the back. After Rayo refused to use a foreign object, the Squad used their 400-pound bodies to crush Rayo between them. That was the setup for their partners to finish it off.

Crockett stood at Rayo's side as Santero raced to a corner. Santero got a running start and leaped at Crockett, who lifted him up by the waist. At the top, Santero hit the swan dive pose, the two momentarily reminiscent of Patrick Swayze and Jennifer Beals in Dirty Dancing. From there, Crockett dropped Santero onto Rayo, completing their tag team finisher to get the win.

"It's called Time Of My Life," Crockett said when asked about it. "[Coming up with] it was a collaborative effort, really. I took a look at Isaiah and said, 'I could probably do something lifting him.' So I asked if we do something out of the corner."

Santero stepped in. "And nobody puts Isaiah in the corner. And then... we just thought of it from there."

The move was the finishing touch on a team that coalesced over 9 months. After another successful eight-man in the Carolinas – with someone other than the champs as the partners – Santero stopped Crockett from leaving. He proposed they become a permanent tag team around the horn. In this case, he quite literally proposed – asking the question while down on one knee.

"I can't believe I'm saying this," Crockett blurted out, a little uncomfortable with the details, "but... all right." And with that, The Cutie and The Beast were official.

After their August win at NVPW, the duo was wandering backstage. Santero had suffered a groin injury during the match – one which the WWE would have described as "ringpost-itis" – thanks to their Chicago opponents, Beauty and the Beast. Crockett checked on his partner.

"Yeah, I think I have an injury in my groin," Santero said, wincing. "But it'll be okay if you put a little ice on it."

Crockett, as though replying to an inside joke, flatly responded, "No, I'm not doing that."

It's clear that, even though he's not inclined to fall in love with his partner, Crockett sees Santero as a good friend. Over time, his reactions to Santero have softened. In March, he would scold Santero for a post-match celebratory hug and walk out on his own. By August, he was playing along much more – even giving Santero a running lift (just like in Dirty Dancing again) to celebrate their victory. For the Halloween show, they dressed as one of culture's most famous duos – Mario (Crockett) and Peach (Santero). 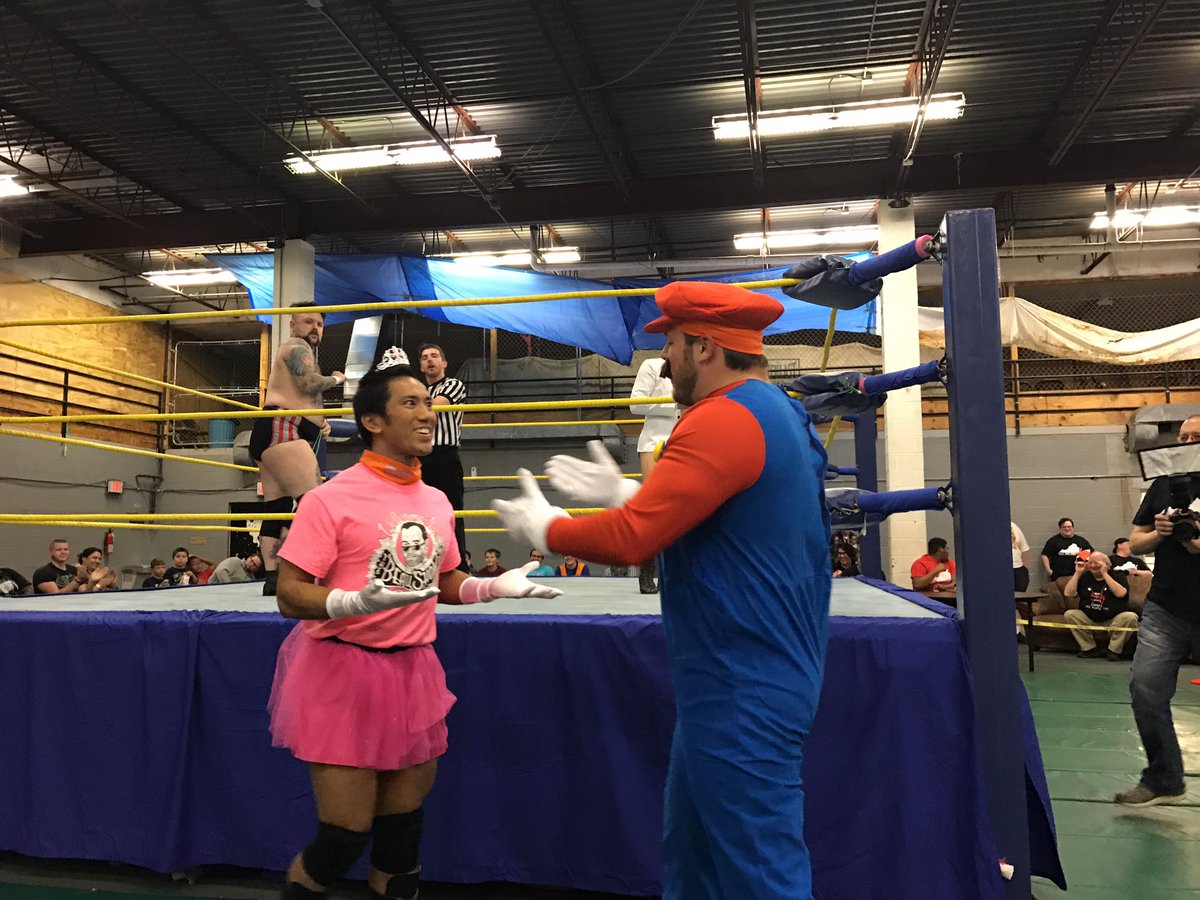 "Yeah, I like to reward him if we do well," Crockett said. "I don't want him to get ideas, but if we both do well, it's worth it."

And the smile on Santero's face as he soars above the aisle after a win, Bill Medley's duet in the background, shows he appreciates the reward.

The Cutie and Beast are a popular duo in Virginia. They've ridden their newfound appreciation to wins over teams like Chicago's Beauty and the Beast and even Ring of Honor alumni the Bravado Brothers. Certainly, they have a chance of working their way up the ladder.

Many fans have suggested they ask CHIKARA for a tryout. "We've heard that a lot," Crockett says, and certainly their mismatched dynamic would be at home in an organization that specializes in oddballs. CZW is also on their radar, since NVPW has given them a chance to face off against some of their Dojo Wars graduates. They also hope Ring of Honor can give them a look.

"I just want them to respond," Santero said. "I even added them to my Myspace so that we'd get their attention."

"Wait," Crockett said, doing a double-take, "you still use Myspace?"

Until the time comes when the bigger boys call, The Cutie and The Beast will tour Virginia and North Carolina, appearing on CWF Mid-Atlantic's web-based TV show while getting audiences clapping to the beat of 80s dance ballads. Although their latest match – against Tennessee-based Team IOU – didn't end the way they hoped, they're clearly a team on the rise. They fight bigger teams – Crockett is 5'10, 230, while Santero is 5'6 and weighs "a Venti serving of fabulousness" – and often succeed. Their pastel blue T-shirts and headbands are big sellers at the shows.

Even if love isn't quite in the air, the best successes can come out of nowhere. From a nightmare pairing in Battlebowl to a dream combination a year later, The Cutie and The Beast has blossomed into Virginia wrestling's best-kept secret (well, until now). While they're not a draw by themselves, they get the crowd buzzing. One thing's clear: both men are having the time of their life.

The author would like to thank The Cutie and The Beast for their assistance in providing information for this profile. Out of respect to the workers, all answers are from the characters. The team is on Twitter @CATBWrestling.