Total Divas is back and I sure hope you’re ready.

Season 6 premiered like an hour ago, but I have no chill. I can't wait to recap the show and discuss it with the fine folks of Cageside Seats!

This is not about me, but quickly: I have a special place in my heart for Total Divas because this is the show that got me into wrestling - thus, place all the blame there. I really had no idea about anything WWE, but I was so curious because of Total Divas that I went with fellow TD watchers to Raw on April 21, 2014 solely to see Brie & Nikki.

I fell in love with this weird and magical world. One WWE network subscription, way too many T-shirts I have to explain, and a growing Note on my iPhone that says things like "Look up Brian Pillman. Look up Y2J ‘armbar’. What is Mount Rushmore, something with KO" later... and here we are.

It is WrestleMania week and everyone is excited. A Paige sighting is startling at first, just a warning. Eva Marie comments "it feels so good to be back up on the main roster". Brie notes that it is her retirement match and Bryan didn't have to come and didn't want to come. She tells her mom how she didn't realize that Bryan not only lost his father and his career, but he lost his friends.

The Ravishing Russian makes her Total Divas debut and she is sans accent. In a surprise to absolutely nobody, Rusev's proposal puts all of mankind to shame. Rusev proposed to his beautiful wife (did you hear he is the only one who can have her?) as they floated about in a swimming pool atop an inflatable animal thing and he utters the timeless, romantic words every girl yearns to here: "Will you engage me and stuff?" I'm not even sure that I quoted that right, I was so swept away on a fluffy cloud of romance. Lana splashes and screams about how gorgeous the ring is.

A scene airs on a show called Total Divas of the women learning they are no longer "Divas". Hmm. Naomi comments "It’s a big deal for me because for so long we were looked at as Divas, or eye candy. Being called Superstars puts us on same level as the men, and I am." Go ‘head girl with that confidence.

Speaking of confidence, Lana is lacking some surrounding her in-ring debut. She has a fashion show for Nattie, auditioning her in-ring gear and testing out wrestling in it. Nattie admonishes Lana for worrying about looking cute and reminds Lana she has no idea what she’s in for. "I’m not trying to be rude, but I don’t want you to screw this match up."

Thankfully this is months before she becomes the coach of Team Smackdown Live for Survivor Series. It does give us exchanges like this one, however.

Lana: Brie and Paige said to not be afraid of my boobs

Nattie: Well, Brie doesn’t have much to be afraid of.

We get to hear Maryse/Brie drama from Maryse first as she spills to some of the cast members. Every time I see her I think about how Maryse’s hair looks so soft (no Big Cass, not now!!!).

Maryse notes that she and the Bellas started around the same time. She and Brie were even roommates (omg can you imagine) but they haven’t spoken one word to each other in three and a half years. Per Maryse, a group of them was offered a contract and they decided to stand together and try to get more money. The deal fell apart, and shortly after Brie texted Maryse "Hey girl don’t be mad…" and Maryse found out the twins still got the deal.

Maryse warns "You’ll hear two sides of the story. My side is the correct side."

Renee Young attempts to broker peace and a few days later invites Maryse to their girls’ dinner with Brie, Paige, a delicious looking cheese plate and meatballs. Maryse wastes no time before getting into it with Brie. Brie claims the three women were offered a really great business opportunity, then "they" decided they wanted just the twins. She says she fought to get Maryse included. "When this went down, it proved to me that I was always there for you, rooting you on, but the minute I got something you blamed me for you not getting it as well."

Maryse stalks off to go "have a cocktail with my beautiful husband whom I love."

Is this supposed to add on to another layer of Miz/Daniel Bryan drama? Or am I thinking too much?

My girl crush Renee makes her Total Divas debut and she is as adorable as ever. She says she is dating world heavyweight champion Dean Ambrose and smiles coyly "It’s great!"

I cannot wait to see this couple on TV. I am thirsty for this in a borderline-pathetic way.

This is already long. Sheesh. Told you I have no chill.

And It Ends With A Yes Lock:

Brie and Nikki have a squabble pre-Mania. Brie is sad about the sad situations surrounding her retirement match. Nikki cautions Brie to think about who she vents to, because Nikki doesn’t think she’ll get to have a last match like Brie does. Nikki thinks Bryan’s situation is overshadowing the struggles she is going through. They ultimately make up because this is how sisters operate.

They show snippets of the 10 women tag at Mania. Is it weird I got emotional seeing Brie lock in dat Yes Lock? I never saw the match but it looked well-received.

Nattie, in what is hopefully foreshadowing for her coaching role at Survivor Series on Sunday, praises the girls backstage and is very enthusiastic about the future of the division. Nikki notes "I will forever be longest reigning Divas champion and no one can break that reign."

And now she wants that record with the womens’ title! Uh oh.

If you're not watching this show, you should be. You need it, trust me.

Did you watch? Let's chat in the comments because I am SO excited (in case this wasn't obvious) for this season.

Maybe next week's recap won't be so long, but I make no promises because this is a good show.

*We Want Lana* chant at a WM signing:

Rusev: I got Lana. You got nothing!

Fan: You guys are my ideal couple

Lana: Are you nervous?

Lana: I love you

John Cena in his John Cena voice: "Is there anything you’d like to talk to me about, Nicole?"

Naomi: "Paige told me she knows how to do hair so she’s going to dye it for me." 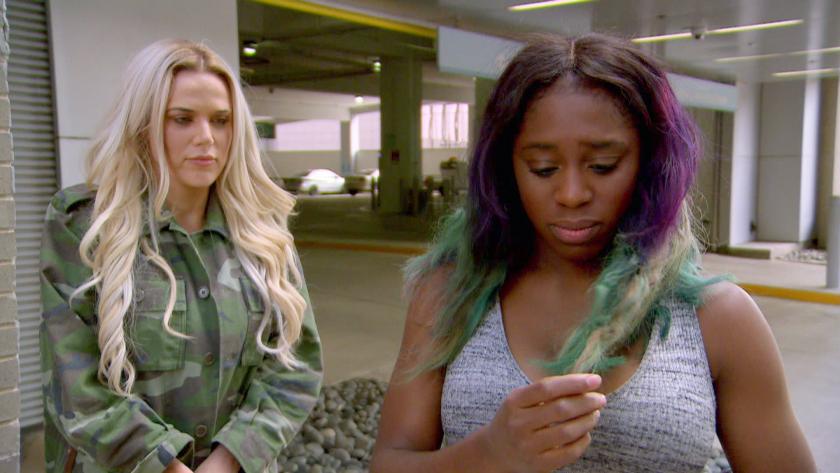 Eva Marie: I have to text Jonathan and ask him to how to order the sushi roll that I like.

Paige about WrestleMania: You have over 100,000 people to judge you, which is great!

Naomi to the make-up team after her hair debacle, sharing a lesson she has learned: Don’t drink during Mania week, period.

Eva Marie, women's wrestling advocate, about their match at Mania: "Who doesn’t like to see 10 girls out there getting it on?"

Renee: Do you SEE the cheese options?