Skipping the formalities for today, Cagesiders, because we have quite the doozy of a comparison on our hands. Today we're looking at two very similar maneuvers: Hurricanranas and Frankensteiners. So, as the great King Ross would say, let's get crackin' with the knackin'!

We begin in Mexico. in the early 1950s, with one Daniel García Arteaga. Arteaga had just finished a bit part in the film Huracán Ramírez, which follows the story of Fernando Torres, a college dropout turned lounge singer turned luchador, wrestling as Ramírez to help support his family, despite his father's wishes. This would begin a series of five movies with the Huracán Ramírez character, a trend in those days with masked luchadors becoming real-life superheroes (The great El Santo, lucha libre's patron deity, has fifty movies and a comic series to his name). 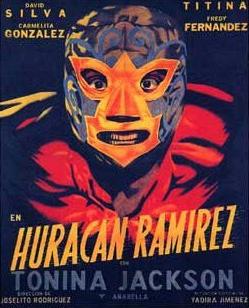 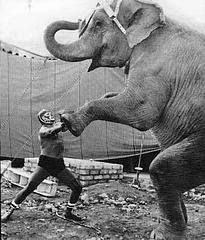 (The original promotional poster for the film. And Huracán Ramírez wrestling an elephant, because we all have to pay our dues, am I right?)

Arteaga, as mentioned, did not play the titular character. In fact, he wasn't even the first man to don the mask. That honor belongs to Eduardo Bonada, who gave up the role when he no longer wanted to hide his identity from the public, and passed the legacy to Arteaga. Under the mask, Arteaga became one of the most iconic and talented luchadors of all time. And if you haven't figured it out by this point, the honor of innovating the Hurricanrana (Or, as it was called back then, la Huracarrana) also belongs to Arteaga, and he used this maneuver to win multiple championships in Mexico, cementing his own legacy while bringing honor to the Huracán Ramírez name.

Before we get to how the move is executed, I should explain that the two maneuvers we're discussing today are both technically variants of one standard technique, the headscissors takedown. That maneuver is executed by wrapping your legs around your opponent's head (called scissoring), and dragging them into a forced somersault as you fall to the mat (There is also a variant of the move where you scissor the legs from a handstand, and roll forward into the takedown). This move is a staple of lucha libre, and what was the template for what would later become the Hurricanrana. Although the two maneuvers are still very similar in execution, the difference between the two is a hurricanrana normally ends in a double leg cradle pinning position, though in American wrestling the move is usually performed without the cradle (Technically speaking, a rana is any double-leg cradle).

(I could not, for the life of me, find a GIF of a standard Hurricanrana, so here's a flying variation. When in doubt, Super Sentai pulls through.)

Shifting gears to the Frankensteiner, this maneuver came a bit later in the wrestling world. And we have one man to thank for that, and he's everyone's favorite large father of fluid mechanics:

(Seen here in his prime. Because yes, he had a prime.)

Scott Steiner, believe it or not, is the man we have to thank for innovating the Frankensteiner (If you couldn't guess from the name). At least, that's what he likes to take great pride in doing. You see, at the end of the day, the Frankensteiner is a variant of a Hurricanrana. That's not to say Steiner played no part at all. On the contrary, Steiner was the man to popularize the move in the United States, simply under a different name.

Now, I'm sure some of you will be adamant in disagreeing with my statement that the Frankensteiner is a variant, and you're entitled to that, but allow me to explain my reasoning through detailing the execution of the maneuver. A Frankensteiner is simply a Hurricanrana performed on a running opponent. The key difference between the two moves, however, is an opponent taking a Frankensteiner will land on their head, as opposed to their back, which is how you take a Hurricanrana.

A frankensteiner is generally more dangerous to pull off, considering you take the bulk of the impact on your head and neck, and the sudden shift in momentum could potentially cause whiplash. A hurricanrana is safer in this regard, as the impact can be taken on the back and shoulders of an opponent, minimizing any long-term damage, with the exception of whiplash if botched. A hurricanrana's danger lies within two variations of the move: We have the dragonrana, where a wrestler performs a front flip off the top rope, onto their opponent's shoulders, into a true hurricanrana (Popularized and named after Dragon Kid, Nobuyoshi Nakamura); And the phoenixrana, where a wrestler performs a 180° turn in mid-air (akin to a Phoenix Splash), into a hurricanrana.

(A dragonrana in action. Couldn't find a GIF of a phoenixrana, unfortunately.)

Despite comparisons, these two maneuvers are still very impressive and effective, especially when done by the right person. Look to any Cruiserweight wrestler or any luchador, and you're bound to find one you love. My personal favorite user of the hurricanrana is the aforementioned Dragon Kid, and for a Frankensteiner, I look to Neville in the GIF above. Part of loving wrestling is loving diversity, as I've said in previous Saturday Slams, and I'll always stand by that statement. Sure, they're different in execution, but they both still have their place in history, and will likely keep that place in history as well.

And that's article five in the dropbox! When next we meet, we'll be taking a look at what may be the most basic of wrestling holds, and the many, many, many, OH SO MANY ways you can execute it. Count to three, friends, we're looking at the Pin next week!

WRITER'S NOTE: A fair bit of warning for next week's post, it may or may not be delayed. On top of taking longer to write, I've recently been on the hunt for a part-time job, and I'm (hopefully) next in line for one I applied for last week. I could start any time, and I wanted to give you all a heads-up just in case the Saturday Slam next week is delayed because of that. If anything changes, I'll likely post news in The Daily, so keep an eye out. That being said, I really appreciate all the feedback I've been given for these articles, be it positive or negative. Thank you for reading, as always, and I'll see you down the road!