In the world of professional wrestling, here's often a lot of talk about "establishing/preserving your legacy." Think back to an iconic moment, like The Undertaker capturing his first WWF Championship from Hulk Hogan, that would be establishing a legacy. Then, think back to another in his career, like capturing the World Heavyweight Championship from Batista at WrestleMania 23 after a near seven years without a championship, that would be preserving your legacy. The formula seems to be one moment that establishes you as the next biggest star, and another moment in the future that cements your position in the professional wrestling world as a true icon.

However, for all the talk of a wrestler's legacy, no one truly appreciates the legacy of a certain move or a hold, when in reality, it would be that move or hold that often played the biggest role in an establishing moment. What maneuver won The Undertaker those championships? The Tombstone Piledriver. What hold won Bret Hart his first WWF Championship? The Sharpshooter.

What was the final nail in Brock Lesnar's second Undisputed WWE Championship reign? The Frog Splash.

No move, to me, is more iconic than the Frog Splash, simply because it has such a rich history. It was, and is, a move that even a novice wrestling lover could potentially recognize. This is helped by names like Eddie Guerrero and Rob Van Dam using this move to finish opponents. It is potentially as recognizable as the Attitude Adjustment or the Pedigree, you think of it when you think of wrestling. So, on this edition of the Saturday Slam, let's give it the recognition it deserves!

Now, there have been many, many names that have utilized the Frog Splash in their careers, whether they use it to finish an opponent or a just a normal maneuver in their arsenal. However, to find who innovated the technique, we look to Mexico in the early 80s, to one Arturo Casco Hernández, better known by his ring name, La Fiera (Spanish for "The Beast"). 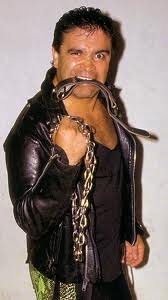 (The man himself. Must be some tasty leather.)

At the time, the splash had no specific name, it was simply a splash. It wasn't until the late 80s that the Frog Splash received its name. "Love Machine" Art Barr debuted in AAA, Mexico's premier lucha libre promotion, with best friend Eddie Guerrero as part of the rudo tag team "La Pareja del Terror" (Meaning "The Pair of Terror), and adopted the splash from La Fiera as a finishing move, calling it the Jackknife Splash (Named for the motion your body makes in midair while executing the move). The duo achieved high success as the most hated tag team in lucha libre history, even going on to win AAA World Tag Team Championships. The naming of the splash came from the mind of 2 Cold Scorpio, who remarked that Barr "looked like a frog" in midair, and thus the Frog Splash was officially born.

(Barr's Frog Splash in action. To this day, still one of the best tag team wrestlers in history.)

Sadly, on November 23rd, 1994, Barr was found dead in his Springfield, Oregon home, after a mixture of alcohol and drugs lead to a heart attack (Even worse, they found him lying with his child, who thankfully was alive). Since then, Guerrero would use the Frog Splash as his new finishing maneuver, in tribute to his best friend. And ever since Guerrero tragically and unexpectedly died on November 13th, 2005 (Only ten days before the anniversary of Barr's death, as if it wasn't chilling enough), wrestlers like Kevin Owens, Seth Rollins, and Sasha Banks would frequently use the Frog Splash in tribute to one of the all time greats.

The maneuver is iconic for many reasons, as mentioned, and one of those is for its simplicity of execution. After ascending to the top rope, the attacking wrestler dives off the top towards their supine opponent. In midair, the attacker stretches their body completely, and moves both their arms and legs inward and outward quickly (Something called jackknifing, again as stated above), and lands on their opponent, often followed by a pin attempt.

(Fun fact, Rollins has also busted out a Three Amigos on occasion. He sees Eddie Guerrero as a big inspiration.)

Now, I attempted to find an answer as to what purpose the jackknifing has in this maneuver, but unfortunately, I came up short. If I had to theorize, I'd say it's merely to stay true to the innovators. From a technical perspective, a Frog Splash is still a standard body splash (Or body press), simply a flashier variation of one. However, it's still an iconic move, it's just iconic based on its history in professional wrestling, which to me is more prestigious.

I also only found two true variations of the Frog Splash in my research, two that are fairly well known: We have the high angle frog splash, in which the opponent would be lying parallel to the turnbuckle instead of perpendicular, and the attacker would turn in midair to successfully splash their opponent (Most commonly used by Rob Van Dam under the name Five-Star Frog Splash, and often done with the opponent halfway across the ring); And the split-legged frog splash, where the attacker would bring their hands between their legs while jackknifing before fully executing the splash (This one goes by a few names, D'Lo Brown calling it the Lo Down, and Ryuji Ito calling it the Dragon Splash).

(High angle compared to split-legged. D'Lo Brown was already pretty beefy, I never understood why he needed that chest protector.)

We've talked a lot about some iconic moves on the Saturday Slam, but I never truly went into why they were so iconic. I chose to do the Frog Splash this week because I still feel the moves and holds any wrestler uses never get the recognition they deserve. Not by the commentators, not by the fans, not even by the wrestlers themselves! That's the entire basis behind the weekly article, to bring light to something that's a very significant part of professional wrestling (How else are you going to wear your opponent down? Grunting at them?), something that deserves to be appreciated. And the Frog Splash, both its legacy and the wrestlers who've used it, are more than deserving of that appreciation as well.

And that's issue seven! When next we meet, we'll be cashing checks and breaking necks... Well, we have no checks, but necks will indeed be broken. Until then, Cagesiders!