On this issue of The Saturday Slam, we have yet another daunting task on our hands. Today, we'll be discussing every single variation of the standard pinfall. Every. Single. ONE. Because of this, and because I don't want to bore my fellow Cagesiders to madness, we're going to approach this a bit differently. After a brief (At least I'll attempt to make it brief) history lesson, I'll go over the many variations in a glossary style, to save from rambling on and to make this less painful for everyone.

In both Greco-Roman and freestyle wrestling, one must pin both of their opponent's shoulders to the mat, long enough for the referee to observe the fall. A fall has to be within either one-half or two seconds in these styles of wrestling. In American collegiate wrestling (College level), a pin must last one second. In American scholastic wrestling (Middle school to high school level), a pin must last for two. Technically, it doesn't matter if you're on your back or your front, as long as your shoulders are down, it can be counted.

That's about it in terms of history. It's hard to find exciting tidbits of facts and trivia when you're discussing pinning someone to the floor. With that said, let's move on to the different variations. As stated, this will be glossary style, but GIFs and/or pictures will be provided for reference, as well as any trivia I can find. I won't leave you too unfulfilled. Let's get started!

Backslide: The wrestler delivering the hold stands back-to-back with their opponent, hooking their arms and dropping to their knees, leaning forward so their opponent slides down their back with their shoulders on their mat. Independent wrestling royalty Ricochet (Lucha Underground's Prince Puma) uses a backslide to set up a piledriver he calls the backslide driver. A common spot is for both wrestlers to hook their arms back-to-back and struggle to execute the hold.

Cover: Also called a lateral press or a cross press, this is your bog standard pin. Pretty self explanatory, opponent's face-up on the mat, wrestler "covers" their prone body (With or without hooking their legs, that'd be optional), attempts to sustain a count.

Cradle: Essentially a cover with the opponent's left leg hooked with their right arm (Or vice versa), providing much more leverage. The name is derived from both the inside and outside cradle, a staple of amateur wrestling. The GIF above is an inside cradle (Also known as a small package).

Crucifix: The delivering wrestler hooks one arm and grapevines the other with his legs (Similar to a crucifixion, hence the name), using their weight to force their opponent down onto the mat, landing on their shoulders. A crucifix driver is the same move, only the deliverer shifts their body weight at a much faster pace, slamming their opponent down (A favorite of Austin Aries).

Gannosuke Clutch: Also known as a somersault cradle, this hold has the attacking wrestler face their opponent, wrenching their arm into a modified hammerlock and performing a front somersault, simultaneously sweeping their opponent's leg, rolling them onto their back with the near leg still swept under them, all while keeping the hammerlock in tight. A mouthful, but an impressive mouthful. 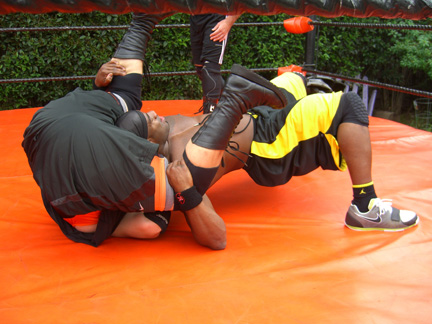 La Magistral: Also called la casita or as bandito (Technically known as an arm-wrench inside cradle). This begins with the opponent on their hands and knees. The attacking wrestler stands next to their opponent's hip and grabs one arm, applying an armbar. From here, the attacker steps over the wrenched arm with their inside leg, so they face away from their opponent, and continues this turning motion eventually diving over their opponent, rolling onto their side for, (The barred arm acting as a lever to assist in flipping the opponent onto their back), hooking a leg for the pin.

Oklahoma Roll: The attacker stands at their opponent's side (The opponent is positioned on their hands and knees), hooking one arm around their neck and the other in between their legs, and rolls over their opponent, landing on their back or side so their opponent is pinned onto their shoulders. This move is often confused with an O'Connor roll, which is technically a roll-up. (I realize this GIF is a poor demonstration, my apologies.)

Prawn Hold: This pin is similar to a rana, the key difference being the attacker is standing, bent over their opponent with both legs hooked in order to press their weight down for a pin. A common transition into this pin is after a powerbomb.

Rana: As I discussed extensively in the last issue of the Saturday Slam, a rana (Technically known as a double-leg cradle) is a pin position with the attacking wrestler sat in between their supine opponent's legs. The attacker grabs both legs and holds them in their armpits, keeping their shoulders pinned to the mat and using the caught legs for added leverage.

Roll-Up: Also referred to as an O'Connor Roll (Though Pat O'Connor, the innovator of this hold, claimed it was technically called a "reverse rolling cradle"), the attacker rolls backwards onto the mat, from a waist-lock, their opponent ending up onto their shoulders with the attacker using their body weight to hold the pin, sometimes bridging onto their hands for further leverage. A usual heel tactic is to grab the tights for "added leverage" (Which I never, ever understood, though that's for another day). And one of the most visually impressive moves in wrestling, the Chaos Theory (Innovated by Doug Williams and used frequently by Chad Gable) sees an O'Connor roll transitioned into a German suplex.

Schoolboy Sweep: More often than not, this pin is confused for a roll-up. They are, however, completely different. A schoolboy (Or schoolgirl, when used by a female) sees the attacker drop down behind their opponent, hooking an arm between their opponent's legs and sweeping them from underneath so they fall onto their back, body arched and on their shoulders for a pin. A modified version where the attacker lays sideways on their lower back, forming a side bridge, also exists.

Sitout Pin: A pin almost as common as the standard cover or schoolboy, this is often the finishing piece of a sitout powerbomb or sunset flip. The opponent is lying supine, the attacker holding their legs up for the pin, often keeping weight on their shoulders. Manami Toyota, a popular female star in Japan, popularized her own modified sitout she called the Manami Roll... Of which I could find no GIF or even picture of, unfortunately.

Split-Leg Pin: This particular pin is obviously quite self explanatory, simply perform the splits across your opponent's shoulders, so enjoy this timeless example of how NOT to do it...

Straddle: It pains me to provide visual representation for this pin, as I find it more demeaning than anything else, but sometimes we must sacrifice in the pursuit of knowledge. This pin is essentially an attacking wrestler kneeling down onto their opponent's chest, sitting with their knees on their opponent's chest, "straddling" their face as you would a horse's saddle. This is often used by heels (Gender is irrelevant) to demonstrate dominance or to humiliate their adversary.

Sunset Flip: This particular name is more of a maneuver than a pin, as the titular technique often results in a sitout pin, but its execution is different enough to warrant its own entry. This sees the attacker diving over a bent-over opponent's back, catching them in a waist-lock and pulling them down into a sitout pin.

I realize this issue came off as little more than a glorified Wikipedia search, and I apologize for that, but this was a topic I wanted to write about ever since the Saturday Slam began, and I was debating better ways to pull it off, this was the end result. I would still love to hear your favorite variation in the comments, I always enjoy reading them.

I promise the next Saturday Slam will be treated with far more respect, because when next we meet, we're cranking up the Latino Heat and firing up the Love Machine as we take a look at one of wrestling's most iconic high-flying maneuvers! Until then, Cagesiders!